Save money and spread the cost on Bianchi bikes.

Its iconic turquoise colour is well over a century old but Bianchi is moving with the times, offering city bikes, e-bikes, and more.

Bianchi is the world’s oldest existing bicycle brand. Eduardo Bianchi began building bikes in Milan in Italy in 1885. They were identifiable, then as now, because they were painted ‘Celeste’, a turquoise colour also known as ‘Bianchi green’. What inspired it? Some say the Milan sky, others the eyes of Queen Margherita of the House of Savoy, to whom Edoardo Bianchi gave a bicycle and riding lessons. More likely, perhaps, is the story that Edoardo got hold of surplus military paint in light blue and pale grey and mixed them together. In any event, the colour stuck.

The bikes themselves have changed almost beyond recognition, not just in terms of technology but in scope. In earlier decades, the Bianchi brand was synonymous with racing. Partly that’s because Edoardo Bianchi believed racing was the best way to test products, and partly because the company went on to sponsor professional racers – notably Grand Tour winners Fausto Coppi, Felice Gimondi, and Marco Pantani.

The pro peloton, however, is only one of the strings to Bianchi’s bow. Alongside carbon fibre road race bikes there’s a wide range of other drop bar machines: gravel, cyclocross, endurance road, fixed wheel, triathlon, and even a vintage model. There are also cross-country mountain bikes and a collection of e-bikes – for road, mountain, and city use – that put this historic brand at the forefront of pedelec development. Of Bianchi’s city bikes, only the sportier C-Sport range is available in the UK. 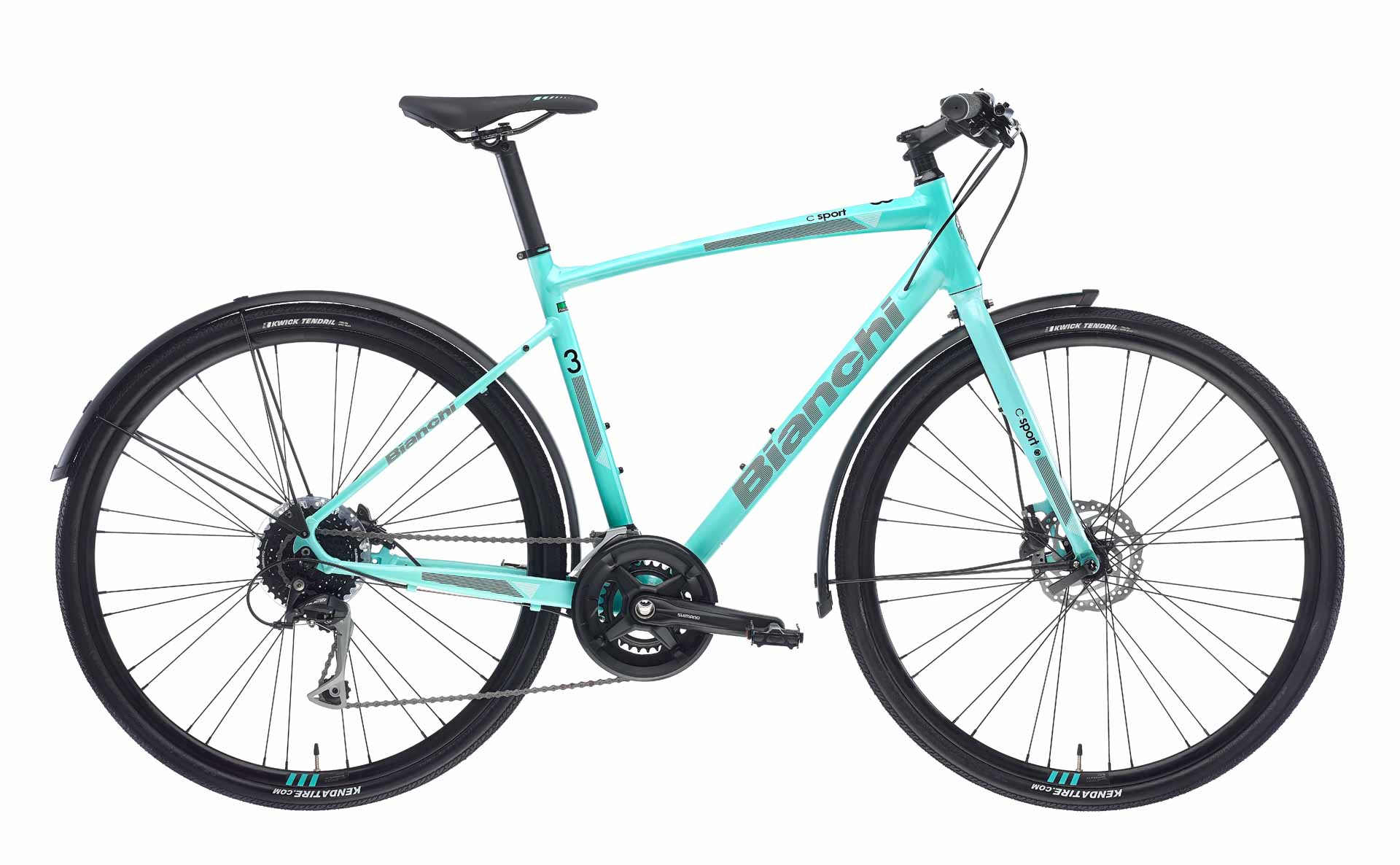 Top of that C-Sport range is the C-Sport 3, a fitness/city bike that uses mountain bike components for its 2x9 drivetrain. That means smaller chainrings (46-30), a bigger cassette (11-36), and thus gears that go low enough to get you up hills. The aluminium frame and fork are lightweight and stiff, which sportier commuters will appreciate, and any lack of resilience here is addressed with vibration damping 35mm-wide tyres. Rack and mudguard mounts allow easy fitting of transport essentials, while hydraulic brakes provide all-weather dependability. It comes in utilitarian black as well as Celeste. 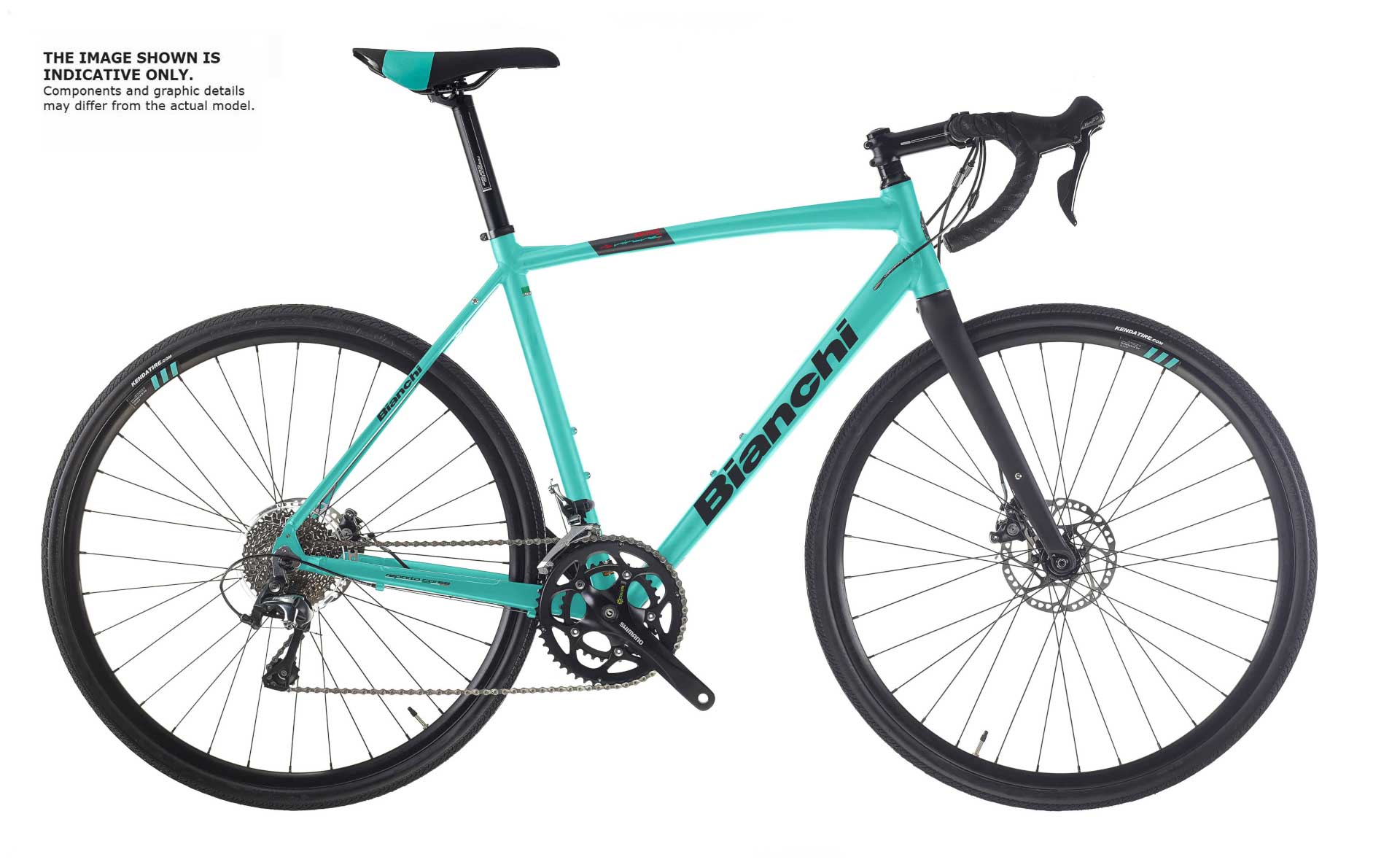 The name is a mashup of the address of Edoardo Bianchi’s first workshop in Milan (7 Via Nirone), a reference to the fact that it’s a gravel bike (Allroad), and its Shimano groupset (GRX 400). Like most gravel bikes, it’s a better commuter and all-rounder than a road bike. The aluminium frame and carbon fork are rack and mudguard compatible, while the tubeless-ready wheels are shod with 35mm tyres that will tackle anything resembling a road. Its 2x10 gears are more robust than race components and have lower ratios. Note that although the picture shows mechanical disc brakes, it actually comes with RX400 hydraulics that provide mountain bike levels of stopping power in a drop-bar package. 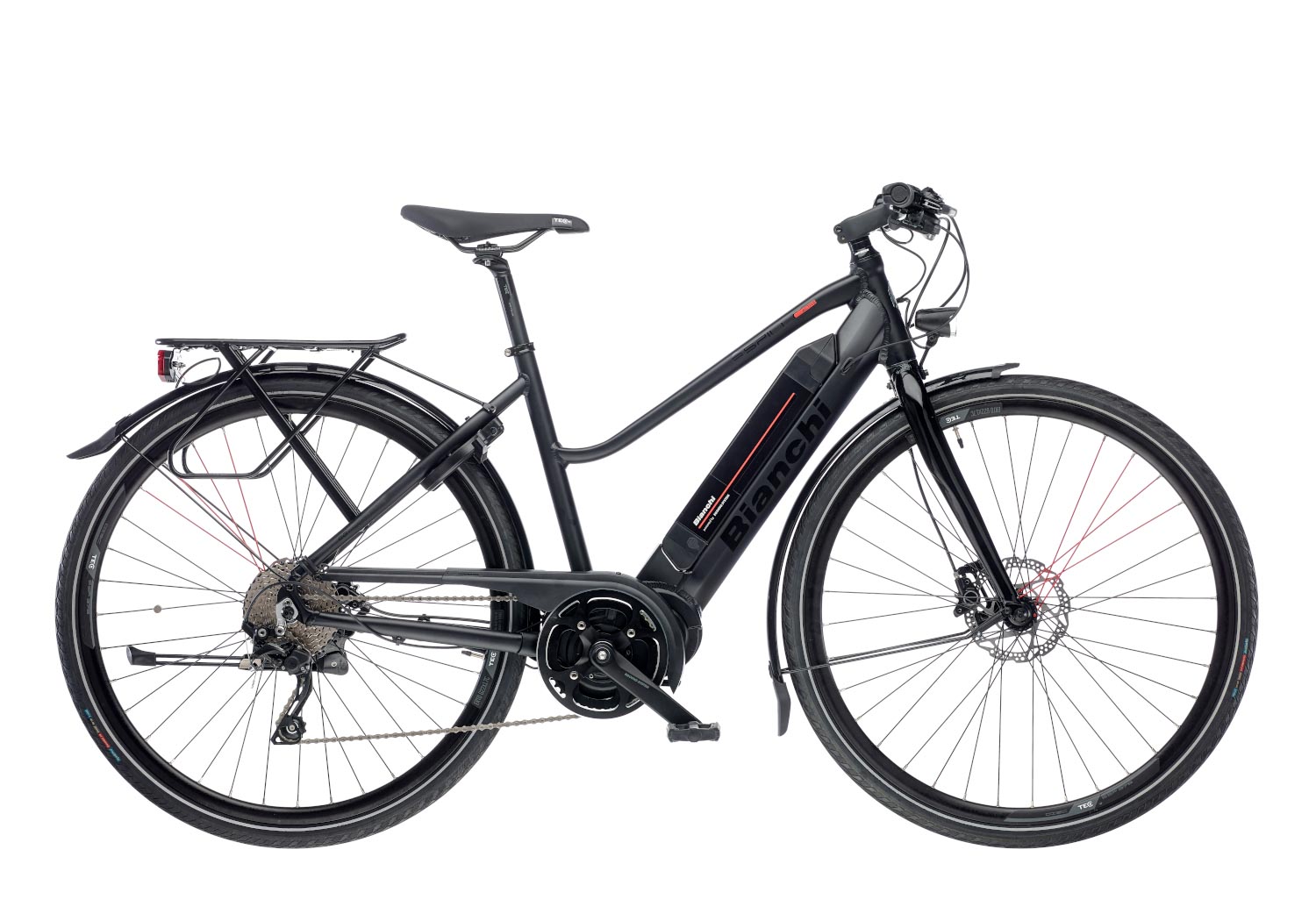 Electric-assist road, allroad, and mountain bikes are also available from Bianchi, but for commuting it’s hard to look past their e-city bikes. The E-Spillo Active Lady – there’s an Active Gent with a top tube – neatly integrates the pedelec electronics and all commuting essentials. It’s powered by an E-Going crank motor with five assistance levels and a 418Wh battery, giving a range of ‘up to 120km’. The display is incorporated into the one-piece handlebar/stem, so can’t be snapped off. Equipment fitted to the aluminium frame and fork includes lighting, mudguards, rear rack, kickstand, chainguard, and a frame lock – everything you need to get on and go. The only thing it doesn’t have is Celeste-coloured paint.