A commuter's guide to Cycle Paths 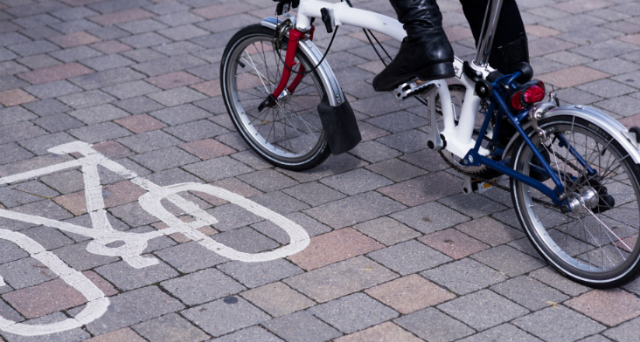 Segregated cycling facilities range from fantastic to frustratingly bad. Here’s what you need to know before incorporating them into your ride to work.

Cycle paths in the UK come in two kinds: cycle lanes painted on roads and cycle tracks that are separate from roads. They’re both intended to give cyclists space and make cycling journeys easier and more pleasant. Some do, some don’t. The majority are squeezed into the margins of the existing road and footway network. (A footway is a pavement next to a road.) That’s why they pale into comparison with Dutch cycling facilities, where space for cyclists has been reclaimed from motorists and has been built into new projects from the outset.

Because UK cycle tracks and cycle lanes are such a mixed bag, the only way to know for sure whether the ones near you will help or hinder your commute is to try them. But here’s some advice.

A cycle lane is simply a part of the road, demarcated by a white line, the painted outline of a bike, and, if you're lucky, some differently coloured tarmac. There's seldom anything to stop cars drifting into the cycle lane – or parking on it. Some cycle lanes, notably in London, have raised kerbs between the cycle lane and road. This makes a big difference, giving the space wholly over to cyclists and turning the lane, in effect, into a roadside cycle track.

Cycle tracks commonly run parallel to a road on the site of a former footway. At junctions with side roads, the cycle track gives way to the road in almost every case. Some cycle tracks, built or signposted by sustainable transport charity Sustrans, follow disused railway lines and are separate from the road network. Both kinds of cycle tracks are usually shared use with pedestrians. Sometimes there's a painted dividing line, sometimes not. 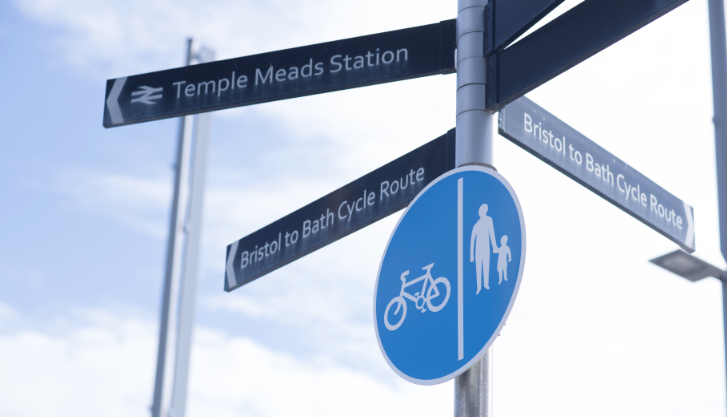 In addition to dedicated cycle tracks, there are other motor-vehicle-free rights of way that cyclists can use. In England and Wales, all bridleways can be used by cyclists. There's no requirement that the surface be kept suitable for bikes, so anyone on small wheels or narrow tyres should proceed with caution. Cyclists must give way to pedestrians and horse riders on bridleways, which are shown on Ordnance Survey maps as a line of long dashes.

Cyclists in England and Wales can also use restricted byways, essentially green lanes and dirt tracks that are forbidden to motorists. They're marked on OS 1:25k maps as a dashed line with a little sideways spur on each dash. Cyclists can also use permissive paths in England and Wales, routes where there’s no automatic right of access but where the landowner allows it. Canal towpaths are the most extensive example.

In Scotland, access laws are much more liberal; there’s no legal distinction between footpaths and bridleways, for example. Northern Ireland, by contrast, has relatively few rights of way. 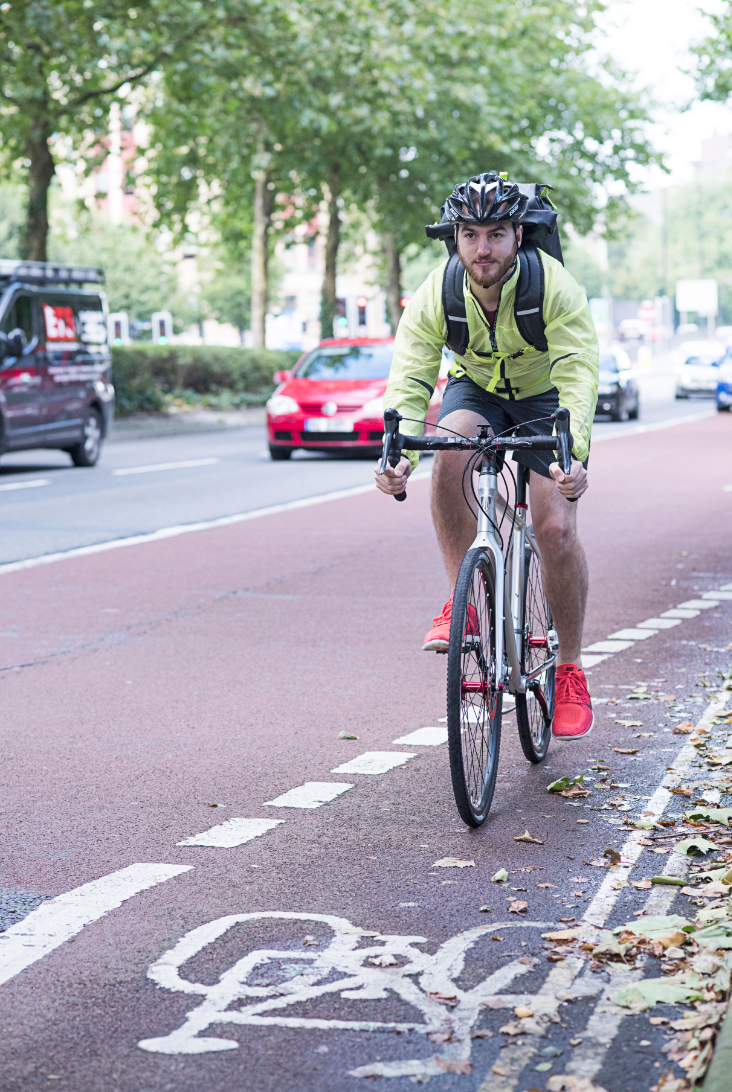 If nothing else, a cycle lane is a visible reminder to drivers that there are cyclists about and that they are entitled to space on the road. Most drivers won’t encroach on an occupied cycle lane, so if the lane is wide enough – very few are – it promotes a minimum passing distance.

Cycle lanes are of most use when they give cyclists access to places cars cannot (or should not) go. Advanced stop lines at traffic lights enable cyclists to get across junctions ahead of overtaking or left-turning vehicles, improving safety. Contraflow cycle lanes on one-way streets can provide cyclists with practical shortcuts; a raised kerb here is a more reassuring divider between road and cycle lane than paint.

The vast majority of cycle lanes are far too narrow, so if you cycle within the lane – the Highway Code entreats you to do so ‘when practicable’ – you will be too close to the kerb. (See bit.ly/cs-positioning for more on this.) On top of that, some lanes specifically direct you into road positions and manoeuvres that make you more vulnerable. For example, some cycle lanes run around the edge of roundabouts, putting you at risk from traffic entering or leaving; some put you too close to parked cars, so you might be struck by a carelessly opened door; and some encourage you to ride up the inside of a left-turn lane, which can be lethal if lorries are involved (see p21). Some cycle lanes start and end seemingly at random, spitting you back into the traffic stream with little warning. Others direct you into street furniture… Visit bit.ly/cs-crapcyclelanes for scores of examples of road planning ineptitude.

Since they’re at the periphery of the road, cycle lanes have the same problems of any road edge. Debris collects there, ‘swept' by the action of car tyres, drain covers are installed there, and cars park there – yes, right in the cycle lane!

Cyclists are free to use or not use cycle lanes as they see fit, whether they’re mandatory or advisory. The Highway Code, Rule 63, acknowledges this: ‘Use of cycle lanes is not compulsory and will depend on your experience and skills.’  Other road users might not realise this and could react angrily if you do not ride on ‘your’ part of the road. Do not be browbeaten. Your aim is to complete your journey in a safe, legal and timely fashion, just like anyone else. If a cycle lane helps you do that, use it; if it doesn’t, don’t.

Cycle tracks provide cyclists with their own transport network – of sorts. It’s a lot patchier than the road network, so cycle tracks won’t always take you where you want to go. When they do, it’s nice to escape the stress, noise and fumes of motor vehicles. Cycle tracks are particularly suitable for less confident cyclists, and those intimidated by drivers who overtake too closely, as it doesn’t matter if you wobble a bit. Good cycle tracks are useful for all cyclists.

Cycle tracks that follow disused railway lines can be excellent, if they’re sufficiently well surfaced and maintained. Those old railways avoided steep hills, which makes for less strenuous cycle commuting. They go directly into urban centres, and they often go over or under roads so there are fewer junctions at which you’ll have to give way.

Junctions are the bane of roadside cycle tracks. The cycle track invariably gives way to every side road, which makes cycling along one very stop-start. The cycle track also complicates junctions. Consider a main road with a side road joining it at a T-junction: a three-way junction. Add a cycle track running parallel to the main road and you’ve now got a five-way junction. There’s more going on and more chance that someone will not see someone else and make a mistake. Even the Highway Code acknowledges this, saying about cycle tracks in Rule 62: ‘Take care near road junctions as you may have difficulty seeing other road users, who might not notice you.’

Cycle tracks vary in quality just as cycle lanes do. For every excellent cycle track, there’s one (or more!) that’s too narrow or has too many tight, blind bends. Cycle tracks might not be swept or gritted as regularly as roads, so you’re more likely to encounter debris, such as broken glass or dog dirt, and ice in winter. Roadside cycle tracks might benefit from streetlighting; ones away from roads might not, which could rule out using them after dark if they go through less salubrious parts of town.

Slow down. There’s no specific speed limit for cycle tracks, but if you’re regularly doing more than 15mph you’re better off on the road. Give way to pedestrians, and take extra care around children, dog-walkers using extendable leads, and joggers with headphones. Ring your bell to alert other cycle-track users or call out a cheerful “good morning”.

Roadside cycle tracks sometimes swerve back into the road with little warning, depositing you into a cycle lane or the carriageway itself. Take care crossing the dropped kerbs where roads and cycle tracks meet: cross them square-on not at an acute angle, or your wheels might be swept from under you. Be alert too for bollards or barriers. Ride slow enough that you can stop within the distance you can see ahead. For more advice, see bit.ly/cs-trafficfree.

As with cycle lanes, cycle tracks are not obligatory. The Highway Code uses the same words to describe them (Rule 61): ‘Use of these facilities is not compulsory and will depend on your experience and skills.’  You might find a given cycle track useful all, some or none of the time.

While the UK still has a very long way to go to get facilities comparable with those in the Netherlands, there are bits and pieces all over the country that can improve your commute.

If you’re not sure what’s available for your journeys, visit cyclestreets.net or download the Cyclestreets smartphone app (details on the website). You can then plot your ride to work by typing in the start and end points and then choosing the Fastest, Balanced or Quietest option. Fastest is most direct, while Quietest prioritises traffic-free sections and then quieter backstreets; Balanced you can work out.

You can get PDF and paper maps of lots of towns and cities with suggested cycle routes from fourpointmapping.co.uk. If you want to ask other local transport cyclists for advice on routes, visit cyclenation.org.uk to find your nearest cycling campaign group. You might even want to join them in calling for improved facilities where you live.