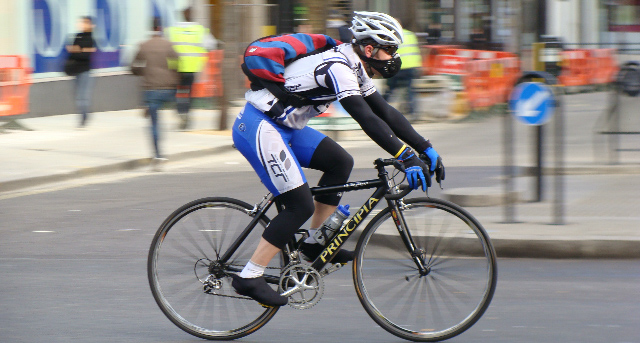 The air quality of some our cities isn't great, but you're still better off going by bike. Here's why.

Air pollution isn't just unpleasant, it's dangerous. The World Health Organisation ranks it above ebola and HIV as a public health risk. It's been in the news lately for a few reasons. Car manufacturers have been fined for cheating on emissions standards. This January, air pollution was briefly worse in London than Beijing. In February, the European Commission issued the UK with a final warning for 'persistent breaches' of air pollutants.

Irrespective of how you travel, polluted air is a real problem for urban commuters. But don't be persuaded to hang up your cycle clips. There is a tipping point where the dangers of pollution outweigh the benefits of exercise. To reach that point, however, the atmosphere has to be terrible. It is in small number of cities, mostly in India, China, and the Middle East. It isn't in the UK.

Audrey de Nazelle, a lecturer in air pollution management at Imperial College’s Centre for Environmental Policy, co-wrote a report for Preventative Medicine on air pollution and active travel (i.e. walking and cycling). Speaking to The Guardian in February, she said: 'The benefits of active travel outweighed the harm from air pollution in all but the most extreme air pollution concentrations. It is not currently an issue for healthy adults in Europe in general.'

In any case, studies have consistently shown that drivers experience worse pollution than cyclists. Drivers spend more time on busy roads than cyclists, often stuck right behind the exhaust of a vehicle in front. Pollutants can build up inside a car too, whereas they're free to disperse in the open air. A report in March for the BBC's So I Can Breathe series found that a taxi driver in Bath was exposed to more pollution than a cyclist.

If you thought going by bus or the London Underground might avoid pollution, think again. A study by Surrey University recently found that Underground passengers were exposed to eight times as much air pollution as drivers. Bus passengers were better off than Tube travellers but still worse off than drivers.

While going by bike is better, there are things you can do to limit your exposure to air pollution even further. The most important is to plan your cycling route to work to avoid busy roads. This can reduce the pollution you inhale by 'up to 70%', according to Breathe London, which also sensibly advises you to avoid sitting behind large diesel vehicles such as lorries and buses.

Should you use a mask? If you have a pre-existing respiratory condition, it's not a bad idea, as the mask will filter out particulates – so long as it fits properly over your face and so long as you periodically replace the filters. A recent study in Beijing showed that masks could help healthy adults too, but bear in mind that Beijing's air is – usually – significantly worse than ours. You can check what the air's like where you live here.