How to commute in the dark 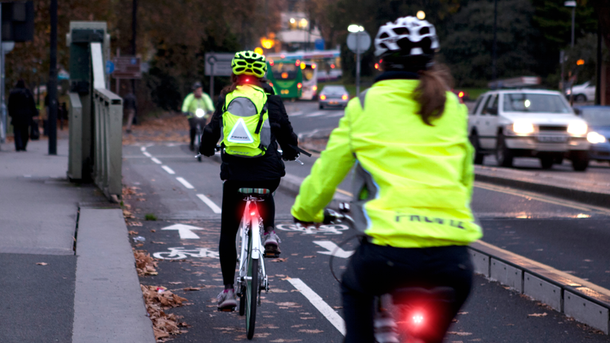 Cycling in the dark is inevitable if you carry on commuting into autumn: dusk arrives ever earlier, and we lose an hour on 26 October. Here's how to tackle a commute in the dark.

Cycling in the dark is inevitable if you carry on commuting into autumn: dusk arrives ever earlier, and we lose an hour on 26 October. Some cyclists are nervous about riding at night. In fact, so long as you make sure you're visible, you generally get more room and respect from drivers at night than you do in the day. Drivers are looking for red and white lights in the dark, so you're immediately on their radar.

For regular commuting, it's much more economical to use rechargeable battery lights or dynamo lights.

When you're cycling on a public road at night, your bike must be fitted with a white front light and a red rear light, as well as a red rear reflector and amber pedal reflectors. The Road Vehicles Lighting Regulations do go into more detail on this, including specifying which lights you can use. Don't worry about the small-print, however; cycle lights have changed faster than the legislation, so it's not enforced. They key points are: to use bright front and rear lights; to fit them to your bike, not your body; and to make sure any additional lights you use are the right colour.

Bike lights are more reliable now than they ever have been, in part due to the universal adoption of LEDs instead of incandescent bulbs. But sooner or later, you'll forget to charge your main lights, a dynamo cable will get damaged, or there will be some other mishap. That's when you'll need backup lights. Small, bright LEDs that strap to the handlebar or seatpost should be sufficient. These lights are meant to get you home, not for daily use. Some LED lights, like the Zecto Drive Pro, will produce white or red light, so are ideal as backup, standing in for either of your main lights.

Fixing your bike is more difficult in the dark, especially if your route takes in unlit roads. Small screws and loose tool bits can disappear into the gutter or roadside grass. You need decent illumination and you need both hands free. That's easiest if you stash a little headtorch in with your toolkit; this light can double as one of your backup lights. If you don't have a headtorch, then your backup front light (or you main front light) needs to be small enough to hold comfortably in your mouth. That way you can still, for example, change an innertube if you puncture.

Your front light must show you road surface details far enough away to react to at the speed you'll be cycling. If it doesn't, slow down – or buy a better light! If you hit a pothole or road debris without warning, it's very easy to crash and/or damage your bike.

For reference: at 15mph (24km/h), you'll be travelling at almost 7 metres per second. On unlit lanes, you'll want a strong beam that lights up the road at least 10 metres ahead. In areas of excellent street lighting, a less powerful light will suffice.

Even if you can see a pothole, you won't know how deep it is as the hole itself will be hidden in shadow. Exercise caution. As far as possible, stick to routes you've previously ridden in daylight. That way you'll know in advance how deep a hole is, or whether that drain cover that sits proud of the tarmac is dangerous or just an irritation.

Some routes are fine in daylight but best avoided at night. A riverside cyclepath or quite park might be idyllic on a summer's day. At night, with no one around? Not so much. Bad people are rare, not non-existent. If you wouldn't walk somewhere alone at night, don't cycle there alone. Stick to routes with people about instead.

This is a real problem on unlit roads. Drivers will have their headlights on full beam, which will overpower your own light and make you temporarily unable to see where you're going. You can't flick your own light onto full beam to remind them to dip either.

Don't look at the car. The best tactic is to look down towards the road, a little in front of your front wheel and towards the road edge, shielding your eyes with one hand - or a cap or helmet peak. This should stop you getting dazzled. Closing one eye may prevent you losing your night vision when the car has passed.

This would have been laughable not many years ago. Not any more. No you can buy battery-powered cycle lights that are brighter than car headlights. Such lights are intended for mountain biking at night. You want light flooding everywhere off-road because peripheral vision is important there - to see that low branch or snaking turn in the trail. On road you don't need as much light, and a much tighter focus, with a cutoff to stop the light going up, is better. This requires better optics than most high-power lights have.

Resist that temptation to fit that 1,000 lumen light that makes you look a spaceship landing and pick one that emits a few hundred lumens instead. Or get one of the few high-power lights that does have a dip function, such as the Exposure Strada Mk5.