Police clamp down on close passes 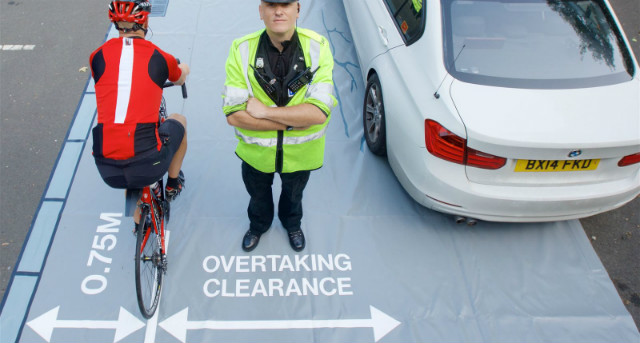 As a cyclist, being overtaken by a driver with mere inches to spare is like standing inside the yellow line on a railway station platform when an intercity thunders through: it's dangerous and intimidating. It's bad enough if you're a regular cyclist; if you're an occasional cyclist, it might be enough to make you stop cycling altogether.

'We know through our work with the Birmingham Cycle forum that close passing is the single biggest deterrent stopping more people from taking to their bikes,' said West Midlands Police traffic officer, PC Mark Hodson, whose force last year became the first in the country to target close-passing drivers.

'Some drivers get tunnel vision,' he said. 'Their only focus is on getting from A to B as quickly as possible. They don’t pay any attention to vulnerable road users and we’ve attended some horrific scenes where cyclists have been wiped out by drivers who’ve not even seen them. Drivers need to consider that a cyclist they are overtaking could be a police officer − and, if they don’t pass them safely, they could be prosecuted.'

Last September, West Midlands Police set up a sting operation: plain clothes officers on bicycles would radio their in-car colleagues with the details of vehicles that passed them too close. Their bikes were equipped with concealed Cycliq Fly cameras to gather proof of any close passes. The drivers were subsequently stopped and shown how much room they should give cyclists, using a large mat supplied for free by Birmingham City Council. Divers passing dangerously close were prosecuted – as were repeat offenders.

The operation has been a great success. Of the 130 drivers pulled over so far, eight have been prosecuted for driving without due care and attention and one had his licence seized immediately for failing a roadside eye test. Many more drivers have been prosecuted by West Midlands Police thanks to the camera evidence of cycling members of the public. The message is clear: the police take close passes seriously. Accordingly, complaints by local cyclists of close passes have halved.

The close-pass initiative could be rolled out to another 16 police forces. At the end of January, a training and Q&A session in Edgbaston was attended by officers from: Avon and Somerset, Derbyshire, Gloucestershire, Greater Manchester, Hampshire, Humberside, Leicestershire, Merseyside, Norfolk, Surrey, South Yorkshire, Sussex, Warwickshire, West Mercia, West Yorkshire, and Police Scotland.

Meanwhile, charity Cycling UK is examining how it can support a nationwide roll-out. 'Currently it’s a postcode lottery,' said Cycling UK Campaigns and Communications Coordinator Sam Jones. 'We’d like to see police services across the country implementing such initiatives.

Duncan Dollimore, Jones's colleague and Cycling UK's Senior Road Safety and Legal Campaigner, explained why: 'This is the first time a police force has come forward with a plan to prioritise enforcement against close-pass drivers. It is quite simply the best cyclist safety initiative by any police force, ever.'