How to commute with confidence 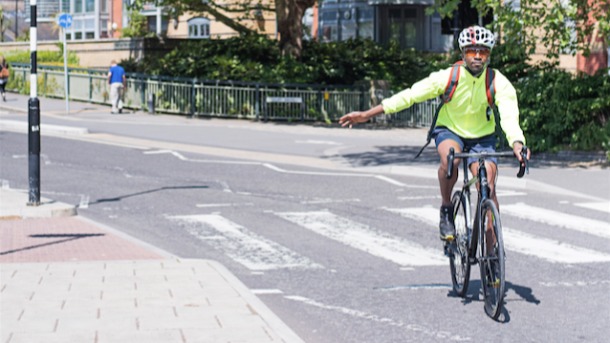 Probably the most effective British road safety initiative of the last year has been the  ‘Close Pass’ campaign. This involves police forces using mats marked with passing distances to show drivers how much room they should give to cyclists. Of course, you won’t be carrying a close pass mat on your bike, but there is a very important thing you can do to help drivers make the right decision and help keep you safe: ride assertively.

What is riding assertively?

Riding assertively isn’t the same as riding aggressively. Some cyclists hop on their bikes and already have their antennae up for imagined slights. This won’t help you reach your destination any quicker and it doesn’t do the wider cycling cause any good, either.

Riding assertively means knowing where you should be positioned on the road and taking that space with confidence. By riding assertively you will get where you are going more quickly, more efficiently and – perhaps surprisingly – more peacefully, too.

Keep away from the kerb

The first step is to position yourself at the correct distance from the kerb. New and nervous cyclists often feel riding closer to the kerb is better as they are further out of the way of other road users and therefore safest, but this is far from the truth for a number of reasons:

- Kerbside gutters are where glass and other road debris collect, which can cause punctures or accidents.

- Cycling next to the kerb gives you little room to manoeuvre should you need to avoid something: you can either steer into the kerb and fall off, or steer out into the path of other traffic and potentially have an even more serious accident.

- Cycling next to the kerb puts you at far more risk of colliding with a pedestrian who steps off the pavement.

- By cycling near to the kerb, you subconsciously encourage drivers to squeeze past you at times when there really isn’t enough space.

So where should you ride? At least a metre away from the edge of the road is about right. This is called the secondary position and will give you a bit of room to move closer to the kerb if there is something in the way ahead of you, such as a pothole. It also means you should be cycling on a fairly pleasant stretch of road that’s not littered with rubbish, and you’ll have a bit of time to react if a pedestrian steps out.

By riding here you’ll be asserting your right to be on the carriageway rather than shamefully lurking to the side, so other road users will treat you with respect.

In tight situations, help make drivers’ minds up for them by assuming primary position – in the centre of the lane – and don’t even suggest you’re far enough out of the way for them to pass.

Do not be fooled or swayed by on-road cycle lanes. You don’t have to cycle in the middle of them – or even use them at all – especially if they are narrow or not in the best condition. Whatever markings are on the floor, keep at least a metre from the kerb.

Cycling away from the kerb is also important for side junctions. Research has shown that cyclists who ride near the edge of the road are at more risk of being hit by cars pulling out from junctions on the left.

One reason for this is that drivers are simply not expecting to see other road users that close to the kerb and don’t even look there – cars, lorries and so on occupy the centre of a lane. So the further you ride towards the middle, the more likely drivers emerging from side roads will see you. Wearing highly visible clothing and using bike lights helps with that, too.

When it’s your time to change lane or turn at a junction, be positive and clear. Right turns are the trickiest because you need to move across two lanes of traffic. Left turns are simpler, although it’s still worth following these  four guidelines:
1.  First look behind you to get a feel for the traffic situation.

3. When you’re happy it’s safe to do so, move across your lane to assume primary position. Don’t worry if you think you’ve moved too early – let drivers know what you’re doing.

4. When oncoming traffic allows it, make your turn.

Many traffic lights have cycle boxes below them – advanced stop lines, or ASLs – where cyclists can wait until the lights go green. You can make your way past other stationary traffic to occupy these boxes, but be careful.

You can filter past on the right with care – drivers expect to be overtaken on the outside. But when passing traffic on the left, there’s always the risk that a passenger will open their door into your path.

More dangerous are large vehicles such as lorries, coaches and cement mixers, which have been the cause of multiple cyclist fatalities. Never EVER pass one of these on the inside as the driver has significant blind spots and may not see you. If the vehicle turns left and you are alongside it, you are in grave danger. 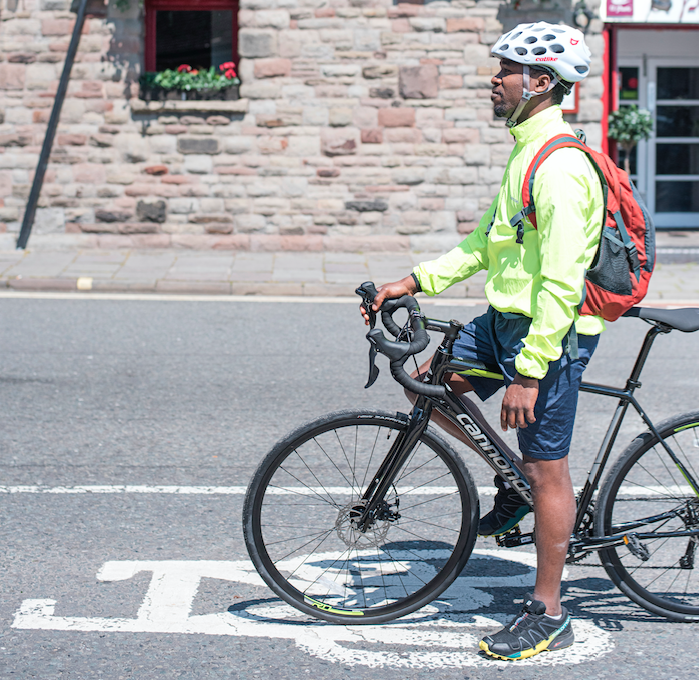 Part of the benefit that comes with riding assertively is that you project an air of competence. Drivers are more likely to give you time to complete a manoeuvre if you look suitably capable. By the same token, they are more likely to take a risk and overtake a rider who seems unsure or hesitant.

Be proactive and wear a helmet and high-vis clothing to help ensure other road users see you and command attention.

Then assert your place on the road and ride with confidence.