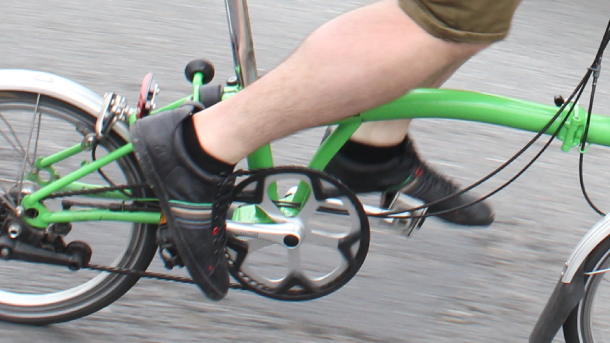 If you can ride a bike, then by definition you know how to pedal. But there's more to spinning your feet around than you might think.

The first bicycle didn't have pedals. The Draisienne, which was also known in Britain as the Pedestrian Accelerator, was invented by Baron Karl von Drais in 1817 and it looked like child's balance bike. The rider propelled it by scooting his or her feet. In the two centuries since, bicycles have evolved in all sorts of ways – not least gaining pedals. Yet many 21st century cyclists still ride with the saddle set like the Draisienne's: low enough to put both feet down on the ground. While this is a great way to learn how to cycle, it's the number one reason why people find cycling hard work.

If you can put both feet on the ground while sitting on the saddle, then unless the bike is unusual (such as a recumbent), the saddle is too low. Your legs won't extend at the bottom of the pedal strokes. It will be like walking while squatted.

Raise the saddle so that, when the cranks are in line with the seat tube, one leg is straight if you have the heel of that foot on the pedal. As you pedal with the balls of your feet, your legs will be slightly bent at the bottom of each pedal stroke. When you stop, you'll only be able to get a toe down unless you get off the saddle.

This method of setting saddle height gives a good starting point, but be prepared to fine tune it until pedalling feels comfortable and efficient. If your knees ache even in an easy gear, go higher in 5mm increments; if your back aches because your pelvis is rocking from side to side, go lower.

Pedal with the ball of each foot over the pedal spindle. This enables you to use your ankle as well as your knee and hip, so that you're using all three 'levers' in your leg: upper leg, lower leg, and foot. It maximises pedalling efficiency.

Most casual cyclists pedal slowly in a relatively high gear, typically around 60 revolutions per minute. You'll hear experienced cyclists say that this wrong and that they should be pedalling at around 90rpm.

That's not entirely true. There is no wrong or right, only what's comfortable. Having said that, it taxes your muscles more to push a high gear slowly than it does to spin a lower gear fluidly. So the further and faster you want to ride, the more you'll benefit from pedalling more quickly. Up to a point, anyway. If you pedal too quickly, your heart rate and breathing will struggle to keep up with your legs.

If you want to measure cadence, many cycling computers will do this via a magnet on the crank and a sensor on the chainstay. If not, just aim for easy, strain-free pedalling. If you find yourself short of breath because your legs are whipping around too quickly, shift up a gear or two or freewheel; if your legs are aching because they're filling with lactic acid, shift down to a lower gear. Maintaining an easy cadence is what gears are for.

It's easier and safer to pedal at a faster cadence if your feet are fixed to the pedals, as they can't then slip off. There are two ways to attach feet to pedals. You can use traditional toe-clips and straps (or modern straps, such as Powergrips), or you can use clip-in pedals. Clip-in pedals require special shoes, whereas toe-clips or straps can be used with ordinary footwear. Before using them for commuting, practise using either set-up until you can get your feet off the pedals automatically.

If you're using flat pedals without clips or straps, you need traction between shoe sole and pedal surface. Old-fashioned rubber-treaded pedals are great in the dry, slippery in the wet. Studded mountain bike style pedals offer good grip but can scuff smart shoes if they catch the uppers.

Experienced cyclists may tell you to 'pedal circles' rather than stomping down on the pedals. Here's a secret: stomping is okay. Your feet will go in circles anyway because that's all they can do. There are efficiency gains to be had from pressing or (with feet attached) pulling on the pedals through more of the pedal stroke. But they only really matter to racers, mile-eaters and cyclists muscling up hills.

Pedalling uses less energy when you're sitting down, assuming the saddle is at the right height. However, you can push a higher gear and bring different muscles into play when you stand up on the pedals and stomp. You'll have to stand if you run out of low gears on a hill, and you might have to do so to accelerate from a dead stop. Riders of singlespeeds have to stand up a lot.

Unless you're riding a fixed-wheel bike, stop pedalling and freewheel when a sharp bend or corner requires you to bank the bike over. Orient your cranks vertically, so that the outside pedal is right down and the inside pedal right up. This has two benefits. It makes you as stable as possible as you go through the corner; and it will stop you hitting the inside pedal on the road.

Your bike probably has 170 or 175mm length cranks. If you're an average height man or tall woman, that's fine. Shorter riders can pedal more easily on proportionally shorter cranks. As a rule of thumb, crank length ought not to exceed about one tenth of your height. So if you're 165cm tall, that's 165mm cranks.

It's not easy to find cranks shorter than 165mm, so those wanting anything shorter may need to get them cut down by an engineer – for example, Highpath Engineering. Highpath also produce 'swing cranks', which, like short cranks, help cyclists with limited hip or knee flexibility to pedal more easily.