Round Up: Rechargeable Lights 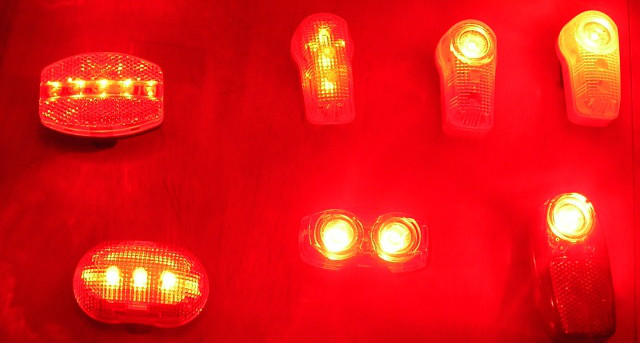 Lights are a legal and practical necessity for cycling in the dark, and rechargeables are the best option when it comes to battery power.

Whenever you cycle on a public road between dusk and dawn, your bike must be fitted with working lights – white at the front, red at the rear. 'Between dusk and dawn' includes twilight, when the sun is below the horizon but there's still light in the sky. As the autumn and winter days dwindle, even nine-to-five workers will need lights for the commute home. Assuming your bike didn't come equipped with dynamo lighting, you'll need to invest in a battery set.

You pay a premium for rechargeable lights compared to ones that run on disposable batteries. You'll recoup that. For while modern LED lights have much longer run times than the filament-bulb lights of old, you'll still burn through batteries rapidly with daily winter commuting. Rechargeables won't last forever; after a few hundred recharge cycles, the battery won't hold much of a charge. But long term they're still cheaper and more environmentally friendly.

The law says that your lights must be marked as conforming to BS6102/3 or an equivalent EC standard. Few lights comply. Fortunately, while we wait in hope for bicycle lighting law to be updated, this is literally not policed. Any sufficiently visible lights are tolerated, so long as they're the right colour. That includes flashing lights. Uniquely among non-emergency vehicles, bicycles can be fitted with flashers.

Flashing is good for attracting attention but it's harder for a driver to track your position in the dark. So a flashing rear light is better used in combination with a steady rear light on unlit, rural roads. A steady light is better at the front in any environment as it will show you where you're going better.

How much lighting power you'll need will depend on where you ride. As little as 10-20 lumens can be enough to be seen by - particularly for rear lights, where 10 lumens is pretty bright and 50 lumens eye-watering. But to see where you're going on unlit lanes, or to pick out potholes on urban roads, you'll need a strong beam. How strong? It's hard to say because a lamp with a cleverly-focused lens will give more useful light for its lumens than a torch, which scatters light everywhere. Your riding speed is also a big factor.

With those provisos: 200-300 lumens is generally sufficient to light your way, while doubling that gives you 'full beam' brightness for riding at pace. Be cautious about using lights brighter than this on road; they can dazzle other road users. Toggle high-power lights to a lower setting if you meet oncoming traffic. Switching to lower power modes when you're able maximises run times too. A secondary pair of small get-you-home lights is a wise investment nonetheless.

Useful features to look for in any rechargeable light are: secure, quick-release attachment; a power button that you can operate with gloves on; good resistance to rain and spray; and USB-rechargeability, so you can top it up at work if you forget to do so at home. 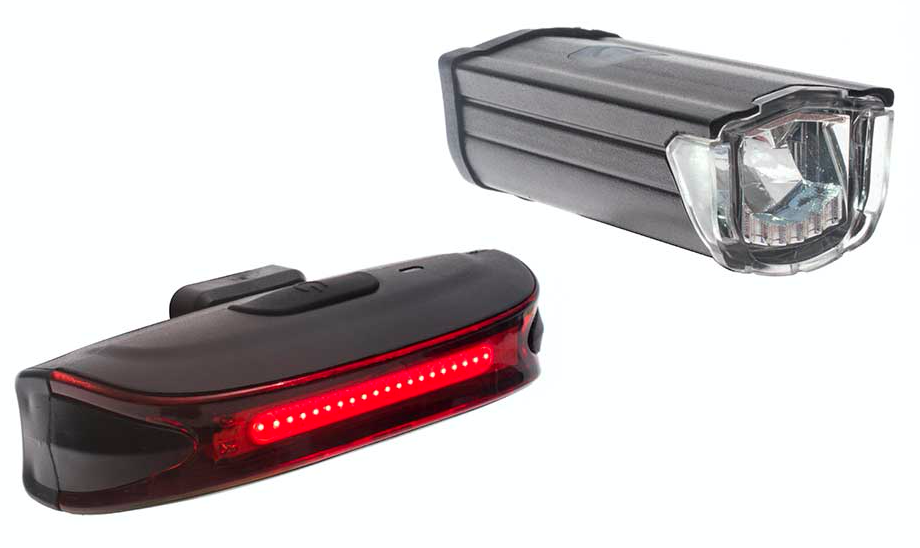 Proof that you don't have to spend a lot of money on rechargeable lights, this set comprises a 200-lumen front and a 65-lumen rear. The front has two steady modes and one flashing and lasts up to 2.5 hours on a charge, while the rear has three steady modes and three flashing and lasts up to 6.5 hours. The rear will attach to the saddle rails as well as the seatpost, which is handy for small frames. 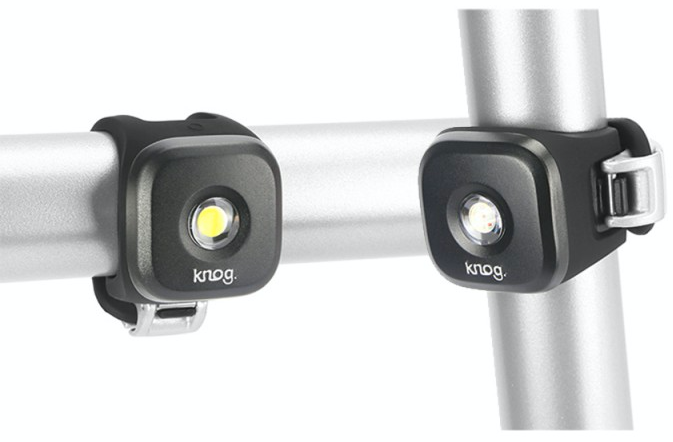 These watch-sized lights would make good backups as they weigh only 15g each. They fit to the handlebar or seatpost with a silicone strap, which has an integral USB plug. The light outputs are modest – up to 20 lumens for the front and 11 for the rear – yet they're visible, Knog claim, from 500 metres. Run times range from two hours on constant to 11 on the 'eco-flash' mode. They're 100% waterproof. 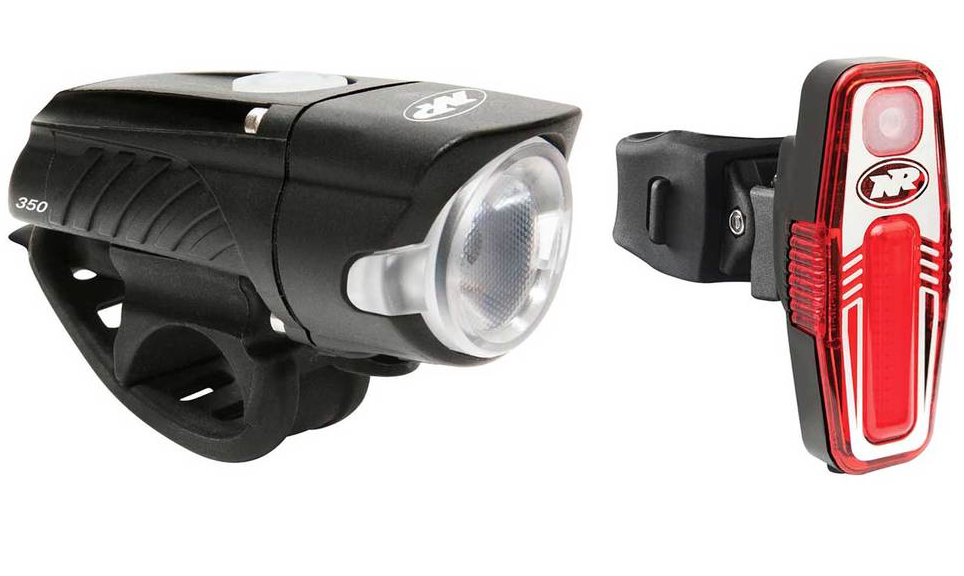 Despite their small size (front 82g, rear 28g), these lights are bright enough for unlit lanes: the numbers in their names refer to the maximum output in lumens. Run times range 1.5 to 21.5 hours for the Swift front and 1.5 to 7.5 hours for the Sabre rear, depending on which mode you choose. Both offer some sideways visibility, which is handy at junctions. 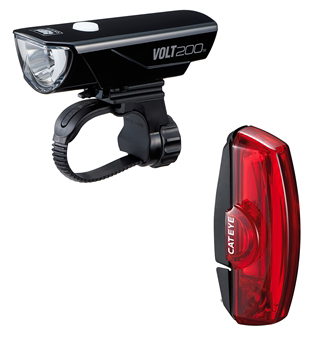 Even lighter than the Niteriders at under 100g for the pair, these run for 30 hours each on their most economical flashing settings. At a steady 200 lumens the front lasts two hours, while the 25-lumen rear lasts an hour on high power. An 'auto save' feature switches the rear to flashing when its charge runs low. Both lights are visible from the side. 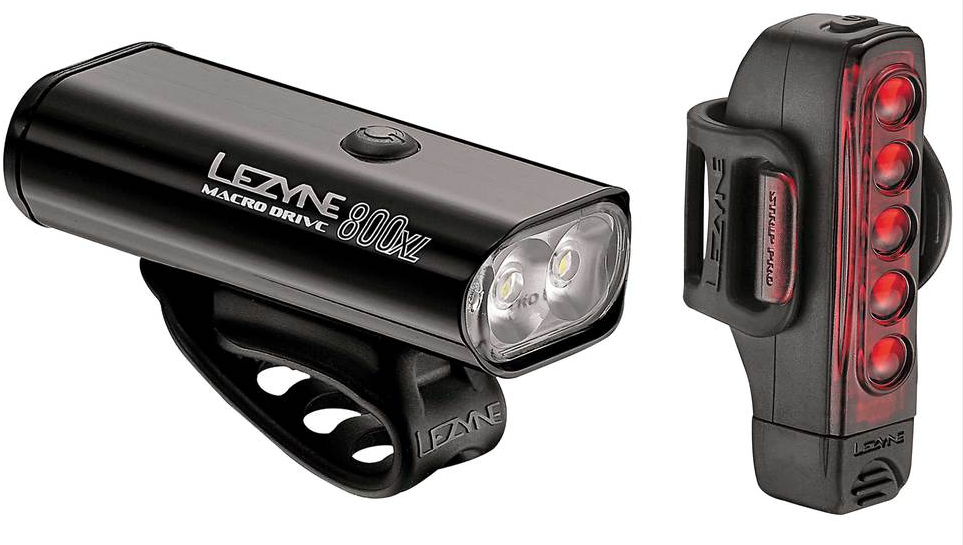 More money usually mean more lumens and better build quality; this set offers both. The front light produces 800 lumens for 1hr 40min on 'overdrive', and the aluminium body helps dissipate the heat produced by this. At 250 lumens ('enduro') run time is an impressive 5hr 15min. The rear emits up to 100 lumens for five hours on 'day flash' or up to 15 hours on its 5-lumen 'economy' setting. 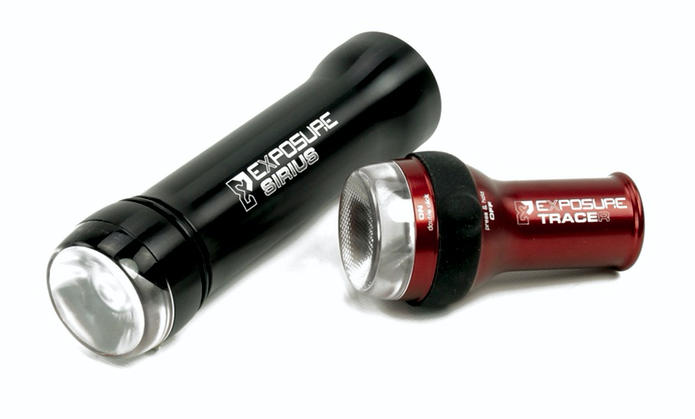 Not much bigger than a packet of Polos, the Sirius will make light (sic) of dark lanes, producing 550 lumens for two hours. It fits to a silicone-strap bracket on the handlebar but can also fit to a helmet mount for mountain biking in the dark. The TraceR runs for three hours at 75 lumens or up to 24 hours on its lowest, pulsing setting. The deep lens design means good sideways visibility. As a bonus, they're made in the UK.

Round Up: Love to Ride February update

Round Up: Everything you need to know about buying a new helmet

To work as intended, a cycle helmet must fit properly and be replaced when necessary. Here’s...