Round Up: Road bikes 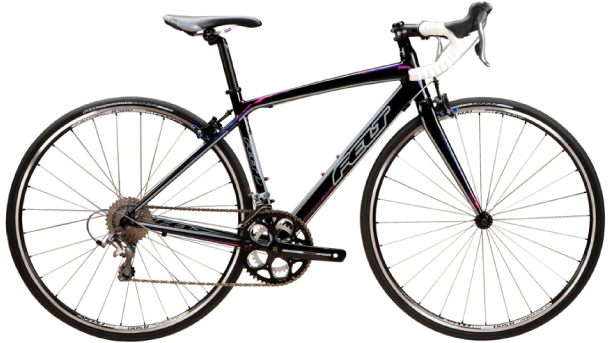 A road bike is one of the fastest ways to get to work under your own steam. It's tempting to turn every commute into a training ride. You'll likely be wearing cycling kit already, because that's more comfortable on a road bike, and you'll find yourself catching and passing other cycle commuters.

A road bike is one of the fastest ways to get to work under your own steam. It's tempting to turn every commute into a training ride. You'll likely be wearing cycling kit already, because that's more comfortable on a road bike, and you'll find yourself catching and passing other cycle commuters. Going fast is what road bikes do. It's thanks to an athletic, aerodynamic riding position; high-pressure tyres; and a low weight that's easy to accelerate.

While you can race on them, most road bikes under £1000 are built more for fast leisure riding. For commuting, that's an advantage. Such a bike is likely to have a wider gearing range, tyres that are slightly wider and tougher, and perhaps fittings for full-length mudguards – maybe even a rack. If it's described as a 'sportive' or 'endurance' bike, it should have a more relaxed riding position too, with the handlebar a bit higher and closer thanks to a taller head tube. You're less likely to get aches and pains in your lower back and your hands riding like that.

The frame will usually be made from aluminium, which is much lighter than steel but not as strong or as stiff. That's why fatter tubes are used: they create a strong, flex-free frame that's still lighter than steel, despite the extra metal. The few steel bikes at this price are built from chrome-moly steel, an alloy that's lighter than the mild steel or high-tensile steel used for bargain basement bikes. It's heavier than aluminium even so but is more resilient, offering the potential for a small amount of springiness and a subtly different ride feel.

You'd feel any difference between aluminium and steel more in the fork, as it isn't triangulated like the frame. As it happens, the fork on an £800-£1000 bike will have carbon-fibre blades and an aluminium steerer tube. Carbon-fibre can have a better strength-to-weight ratio than any metal, which is why it's used: it's light. More expensive bikes have carbon frames and components too.

Whatever it's made of, few road bikes are designed for use with full-length mudguards. If you want to use them, look for a bike that's described as having 'deep drop' or '57mm reach' brakes. There's more room between brake calliper and tyre to fit a mudguard safely. If you want to use mudguards on other road bikes, particularly if you want to use them only some of the time, all is not lost: there are road-bike-specific 'guards available, such as the SKS Raceblade Long and the Crud Roadracer.

Gears on road bikes are biased towards to the high end, on the assumption you'll be riding faster. If you're not especially fit, or you simply want the option of pedalling easily up hills, look for a triple chainset (50-40-30) or a compact double (50-34) that's combined with a bigger cassette, such as 11-30 rather than a racer's 12-25. The gears will be operated by integrated brake and gear levers, usually Shimano but occasionally Campagnolo, Sram, or something else.

Gears become lighter and slicker-shifting the more you spend. You'll get more cogs on the cassette too – ten rather than nine or eight – but note that more steps doesn't mean a wider range. Incidentally, the  hierarchy for gears in this price range goes up like this:

Road bike wheels have narrow rims designed for tyres from 23-28mm wide, and if clearances are tight sometimes nothing bigger than 25mm will fit. That's not a lot of cushioning if you're a larger rider, so don't plough through potholes and do keep tyres pumped up hard. You can buy puncture-resistant tyres in narrower sizes, and they're flat-out necessary for commuting. 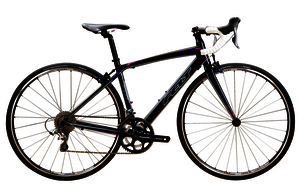 The W in the name tells you that this a women's specific road bike. Many women prefer a shorter reach to the handlebar than men, relative to their height. So this aluminium-framed, carbon-forked sportive bike is comfortably compact. The handlebar and stem are short-reach ones, while the cranks are shorter on the smaller models. Gearing is Shimano Tiagra, which you don't often get at £800, and the compact chainset drives a usefully wide-range 12-32 cassette. The 25mm tyres have some puncture protection, and there are auxiliary brake levers for use from the bar top. 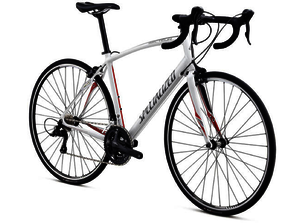 Specialized's 'endurance' bike is designed more for long-distance and everyday comfort than racing. Both the carbon fork and aluminium frame have 'Zertz' inserts that Specialized claim reduce vibration. More importantly, the riding position is more relaxed, even on the drops as the handlebars are shallow, and the saddle is a good one. The gearing is 9-speed Shimano Sora, with some useful climbing gears thanks to the 50-39-30 triple chainset. The 25mm Specialized tyres have some puncture resistance. Unusually for a road bike, there are fittings for a rear rack. 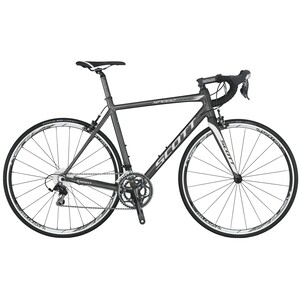 Tipping the scales at just under 9kg, Scott's Speedster 20 Compact is a racier kind of road bike. The riding position suits higher tempo riding rather than pottering, although a 12-30 cassette still provides bail-out gears for steep climbs. The gears are 10-speed Shimano 105, with a splash of Tiagra. Cables are routed internally through the aluminium frame, giving it a neat profile, while the carbon fork is here complemented by a carbon seatpost. The wheels are lightweights too, with only 20 spokes in the front and 24 in the rear. They're shod with easy rolling Schwalbe Lugano training tyres; you might want something tougher to commute on.