Round Up: Road Race Bikes 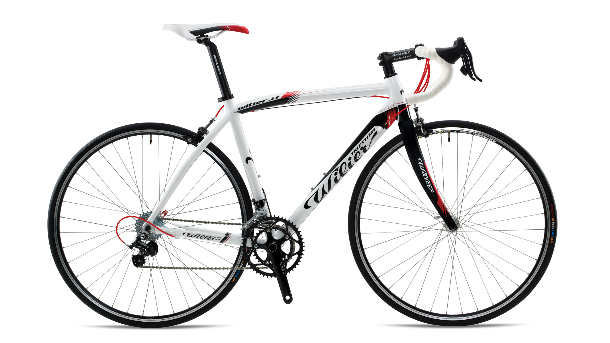 Television footage of the Tour de France and the Olympic road race should see the strong sales of road race bikes rise further this summer. You don't have to be Wiggins or Cavendish to appreciate this sort of thoroughbred. If your ride to work is a Lycra-clad workout, a race bike can also be your transport.

Television footage of the Tour de France and the Olympic road race should see the strong sales of road race bikes rise further this summer. You don't have to be Wiggins or Cavendish to appreciate this sort of thoroughbred. If your ride to work is a Lycra-clad workout, a race bike can also be your transport.

Anything under £1,000 is entry-level in the world of road race bikes, and may be branded 'sport' or 'performance' rather than 'race'. Some may have longer reach (57mm-drop) brakes and mudguard-ready frames and forks, in which case they're practical road bikes. Most don't. You can squeeze in special mudguards meant for racers, such as SKS Raceblade Long (www.sks-germany.com) or Crud Roadracer (www.crudproducts.com). But the focus is speed and efficiency not cleanliness or load-hauling. Expect to change clothes at work and to use a backpack or courier bag for commuting gear.

If you're a competitive commuter, only cyclists on some other variant of road bike should require much effort to overtake. Road race bikes are fast. This is due to efficient, high-pressure tyres; an athletic riding position; and low overall bike weight. Gears are high too, so you'll be attacking climbs standing up and pedalling downhill at eye-watering speeds.

As a rule, entry-level road bikes have aluminium frames. This saves weight compared to steel. Carbon fibre can be even lighter but only bikes with four figure price tags tend to have frames made from it. Carbon-fibre forks, on the other hand, are common down to around £600. Below that you'll likely get steel or aluminium.

Road race bike wheels use narrower, lighter rims, as they're designed for 23mm tyres – and nothing bigger than 28mm. Some have fewer spokes than the usual 32, which saves weight but increases the load on those that remain, meaning more breakages if you're not a lightweight yourself.

Entry-level road race bikes often come with 'training tyres' rather than race tyres. These are a bit heavier and more durable so are a better option for commuting. Schwalbe Durano, Michelin Pro 4 Endurance and Continental Grand Prix 4 Seasons tyres are all good options when you wear out what's fitted. Whatever you use, 23 and 25mm tyres need topping up with air at least weekly; narrower tyres that are soft are less efficient and are prone to punctures.

By default, the hand positions on a road race bike are further forward and lower down than other bikes, whether you use the brake hoods or the drops. Stretching forward is good for aerodynamic efficiency and can also help 'get the power down', but not everyone finds it comfortable. Change the stem for something shorter and higher-rise if necessary.

The popularity of compact double chainsets means that race bike gears are lower than they once were. You may still want a wider-range cassette, such as an 11-28 rather than the 11-25 that will likely be fitted. A triple chainset, with a 30-tooth inner ring, will also help on hills. 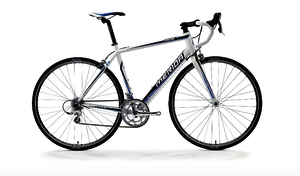 Despite costing a penny under £500, Merida's most economical road bike comes with a carbon-fibre fork, saving weight and helping to reduce the 'buzz' transmitted from the road. More weight is saved with the stem, oversize handlebar and seatpost, which are aluminium rather than heavier steel. The drivetrain is mostly from Sunrace rather than Shimano. It includes R80 integrated gear shifters and brake levers for hands-on control, and and an 8-speed rather than 7-speed cassette. You may want to upgrade the Kenda Koncept 23mm tyres. The women's version is called the Merida Ride Juliet 77. 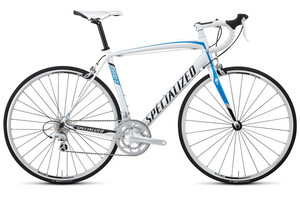 Specialized's Allez aluminium road bike frames are rewardingly lightweight across the range, and they have a more compact reach that makes them more comfortable for many riders. The Allez Sport has a carbon fork, relatively light DT Axis 1.0 wheels, and dependable Shimano Sora 9-speed gearing. The cassette goes up to 27, which with a compact double makes bottom gear that bit more manageable. Contact point comfort is good, thanks to a pressure-relieving Riva saddle and gel padding underneath the bar tape. The nearest women's equivalent is the £650 Specialized Dolce, which has 'only' 8-speed gearing but includes a triple chainset. 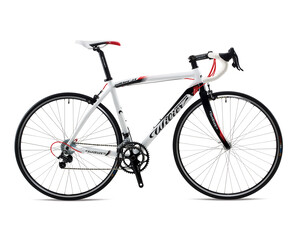 This Wilier offers something different: an Italian bike with Italian components, in the shape of 10-speed Campagnolo Xenon. With an 11-28 cassette, gear range is wider than most road bikes, and the extra cog means smaller steps between gears. The shifters give a more definite transition from gear to gear than Shimano units, and the cable is routed under the bar tape, which is neater. A butted aluminium frame and carbon fork are par for the course, as are the wheels. The Maxxis Detonator tyres are wider than normal at 28mm, boosting comfort and control on Britain's unrepaired roads. 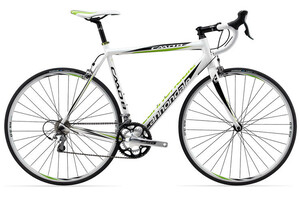 The CAAD8 aluminium frame is one of the lightest you'll find on a bike at this price. And there's more to it than gram-shaving, with neat welds, purposeful tube profiles, and a head tube that's a bit taller than a full-on race bike, providing a riding position that's better suited to recreational rides – or commutes. The gear range is a little wider too, with a 28-tooth bottom sprocket on the 10-speed Tiagra cassette. A compact handlebar means you don't have to adopt such a radical racing tuck on the drops. A carbon fork, sensible 32-spoke wheels, and some budget tyres – which you'd do well to upgrade - complete the spec.

Round Up: Love to Ride February update

Round Up: Everything you need to know about buying a new helmet

To work as intended, a cycle helmet must fit properly and be replaced when necessary. Here’s...