Round Up: Touring Bikes 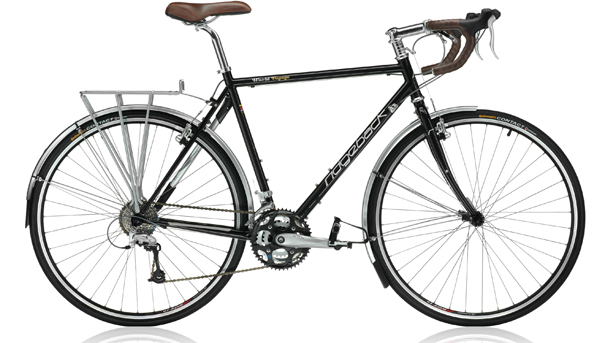 Touring bikes are designed to carry you and your luggage comfortably and efficiently as far as you want to go. That could be a five- or ten-mile trip to work just as easily as coast-to-coast cycling holiday.

Touring bikes are designed to carry you and your luggage comfortably and efficiently as far as you want to go. That could be a five- or ten-mile trip to work just as easily as coast-to-coast cycling holiday.

The drop-bar touring bike is a largely British idea, a blend of the flat-bar Continental trekking bike (essentially a fully-equipped, do-it-all hybrid) and the sporty road bike. With good luggage capacity, full mudguards, efficient tyres, wide-range gearing, and an emphasis on durability, the tourer offers an excellent compromise between practicality and performance.

Touring bikes are relatively rare and seldom cheap because few companies, mostly British ones, produce them. But then the tourer could be your one bike for everything: like a cyclo-cross bike, a touring bike is very versatile.

At Cycle to Work prices, a touring bike will have a steel or aluminium frame and a steel fork. Whichever material it is, the frameset will be stronger and heavier than a road bike’s at the same price, and it will have fittings and frame clearance for attaching mudguards and pannier racks front and rear.

The wheelbase will be longer too. The rear triangle is longer to provide room for a bigger tyre, a mudguard, and heel clearance for panniers. And the frame angles are not as steep, which moves the front wheel forward away from you toes and also provides more relaxed, stable handling. The bottom bracket will be lower compared to a cyclo-cross bike, and this makes it easier to put a foot down at junctions.

Touring wheels have wider rims than a road bike’s as they’re designed for fatter tyres: 700x32C tyres are typical, within a range of 28-37mm. Touring tyres have a smooth centre section to roll well on tarmac, plus some tread on the shoulders of the tyre to cope with unsurfaced roads. The greater width offers more comfort than skinny tyres on rough roads, and they’re not that much slower. The wheels are stronger, using more spokes – 36 as against 32 – and mountain bike hubs.

Mountain bike trekking groupsets provide most of the gearing on a tourer, typically a 28-38-48 chainset and an 11-32 cassette. That combination will winch you up most hills on road. Since tourers have drop bars, the shifters are different from a mountain bike’s. Most use 8- or 9-speed Shimano STI road shifters, which work fine with an equivalent-speed Shimano mountain bike rear derailleur and cassette, and a road bike front derailleur. Some use bar-end shifters instead, which are simpler and more durable but not quite so convenient.

Brakes are usually cantilevers; those with wide arms are best as they provide more braking power. Mechanical disc brakes are increasingly appearing on touring bikes.

Most touring bikes come equipped with mudguards and a rear pannier rack, so are commuter-ready as soon as you wheel them out of the shop. If you’re deciding between a tourer and a cyclo-cross bike, don’t forget to factor in these ‘free’ accessories.

Touring bikes tend to have a more upright riding position than road bikes, while still giving you the opportunity to duck down onto the drops to hide from a headwind. They’re not as light or lively as road bikes but they’re as fast as most other commuter bikes and a better option if you plan to use panniers. 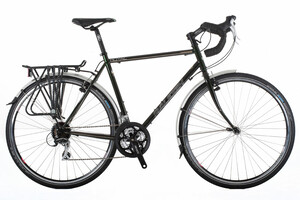 Raleigh’s budget steel-framed tourer is somewhat hefty, like many entry-level bikes, but it’s sturdy enough for the worst roads to work. Its 36-spoke wheels are shod with shock absorbing 37mm Schwalbe Marathon tyres, and its anatomic saddle should reduce perineal pressure. Gearing is a 24-speed mix of Shimano 2300 road and Acera off-road groupsets, while the brakes are short-arm Tektro Oryx cantilevers. The mudguards and rack are of a quality that befits the bike. 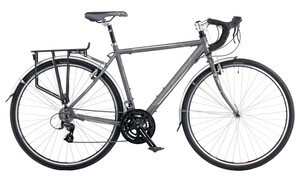 The Regent saves some weight over its immediate rivals thanks to a lighter aluminium frame. It has the full mudguard and rack fittings you would expect from any tourer, but you won’t want to load it too heavily for hilly rides. It uses only Shimano 2300 road bike gearing instead of mixing and matching road and mountain bike groupsets, which means it has a bigger 30-42-52 triple chainset and a smaller 12-26 cassette. Like the Raleigh Royal, the Regent uses 36-spoke wheels and Tektro Oryx brakes. Its tyres are 35mm. 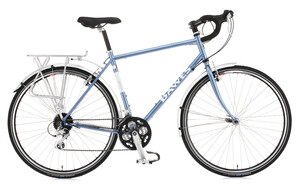 Dawes have been making tourers for ages and it shows in their touring bikes’ carefully considered geometry. They use more fork offset than most, which sharpens the handling and puts the front wheel a bit further from your feet. The Horizon is Dawes’s second most inexpensive tourer. It has a chrome-moly steel frame and fork and a 24-speed drivetrain, using Sora road and Alivio off-road components. The 36-spoke wheels have good quality Shimano hubs and the tyres are a sportier 32mm. 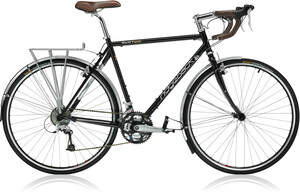 ‘World’ is Ridgeback’s touring range, and until their new budget tourer is launched later this year the Voyage is the least expensive model. Like the Dawes Horizon, it has a chrome-moly steel frame and fork and a 24-speed road/mountain bike drivetrain; the Deore rear derailleur is higher specification component, however. Good quality 36-spoke wheels are shod with 32mm Continental Contact tyres that roll well. Brakes are Tektro Oryx cantilevers and there are auxiliary bar-top levers, which will be handy if you’re not used to drop bars. Nice touches include the anatomic handlebar, good quality rear rack, and matching tan bar tape and saddle.

Round Up: Love to Ride May update

Round up: Five accessories every cyclist needs

Round up: Top ten adaptive bikes

Whatever your physical abilities, there’s a bicycle or tricycle out there to suit you. Here’s a...