Like most cities, Newcastle is trying to improve its provision for cyclists.

A good place to ride your bike? Unlike the shirts of its beloved football club, it’s not black and white. Despite investment, there’s room for improvement

Newcastle owes its existence to the Tyne. Founded at the furthest place downstream that the river could be bridged, its Roman name was Hadrian’s Bridge – he of the Wall, which ends at the modern city’s outskirts in (you guessed it) Wallsend. There are seven bridges today, industrial ones like the Victorian Swing Bridge and the iconic arched Tyne Bridge, and modern ones like the tilting Gateshead Millennium Bridge for pedestrians and cyclists. Between them they span not just the river but the changes in the city’s economy. What was a centre for heavy industries like mining and shipbuilding now thrives on services, retail, and culture.

In some ways Newcastle is like Liverpool, another port city with a strong sense of its own identity and a distinctive dialect. Newcastle also has: a well-deserved reputation for friendliness; impressive 19th and early 20th century architecture; an underground rail network; a passion for football; and a vibrant arts scene and nightlife.

Newcastle is compact enough to get around by bike and, despite the city’s provision for cyclists being very much a mixed bag, quite a few residents do so: 7% regularly cycle to and from work, which is higher than the national average.

The best type of bike for cycling in Newcastle

Thanks to the rain shadow of the North Pennines, Newcastle is one of the driest cities in the UK. You’ll still want mudguards – ‘driest’ is only relative to other, soggier parts of our country – but you might be able to get by without waterproof trousers. Don’t skimp on winter gloves and a decent jacket, however: Newcastle is on the same latitude as Copenhagen and, despite the t-shirts and crop tops you might see in the Bigg Market in December, it can feel bitterly cold when there’s a north-easterly wind coming off the sea.

Newcastle isn’t particularly hilly, though it rises gradually towards the west. The city’s steeper slopes are around the Tyne, as the river has cut a valley into the landscape. This makes the city feel a bit like it’s on two levels: down by the Tyne and everywhere else. Athletic riders may get by with a singlespeed. Most cyclists will want a least a few gears.

One good choice would be the Boardman URB 8.6 2021, which has an RRP of £550. Its 3-speed Shimano Nexus hub gear is durable and weatherproof, and even though there are only three ratios they’re widely spaced. The URB’s budget hydraulic disc brakes are decent stoppers, and the relatively lightweight frame and fork have fittings for mudguards and a rear rack. Boardman bikes are available from Cyclescheme retailer Tredz.

If you plan to use the Metro on a daily basis, a compact folding bike such as a Brompton or a 20-inch wheel Tern makes more sense.

Like most cities, Newcastle is trying to improve its provision for cyclists. As one of eight Cycle Ambition Cities in England, it has invested over £16million in creating urban cycle routes. So far 16km has been completed, another 2km is due to be finished shortly, and a further 10km is awaiting funding.

Newcastle City Council’s map of existing and proposed routes isn’t very helpful for plotting your routes. Rather more useful is Gateshead Council’s cycling map, which also covers parts of Newcastle. To navigate easily, however, you may need to rely on a routeplanner such as Cyclestreets or Citymapper.

The Tyne and Wear Metro is an underground and overground light rail network like the London Underground. With stations throughout the city and also in Gateshead and Sunderland, it’s well connected and accordingly well used. Bikes have been recently accepted on the Metro but they’re restricted to certain, non-peak services. While stations do have cycle parking, if you want to commute with your bike on the Metro you’ll need a folding bike. Folders are accepted on all services. Buses are folders only too.

Rail connections are good to other English cities as Newcastle is on the East Coast Main Line that runs between London and Edinburgh. It’s also on the smaller Tyne Valley Line. Cycle carriage varies by operator. The National Rail website has details. When you plan a route online and select a journey, hover your mouse over the bicycle icon (under ‘Additional info’) to read bike carriage restrictions. The National Rail app includes similar info under ‘Travelling with bicycle’.

The jewel in the crown of Newcastle’s traffic-free cycling routes is the River Tyne Trail on the north bank, which appears on Sustrans’ maps as NCN route 72. In the city it’s the best way to see the bridges. Talking of which, there’s also a trail that’s mostly traffic free on the south bank: NCN 14. Since you can cross the river (traffic free!) via the Gateshead Millennium Bridge and the Tyne Pedestrian and Cycle Tunnel between Jarrow and North Shields, you can make this into a circuit. 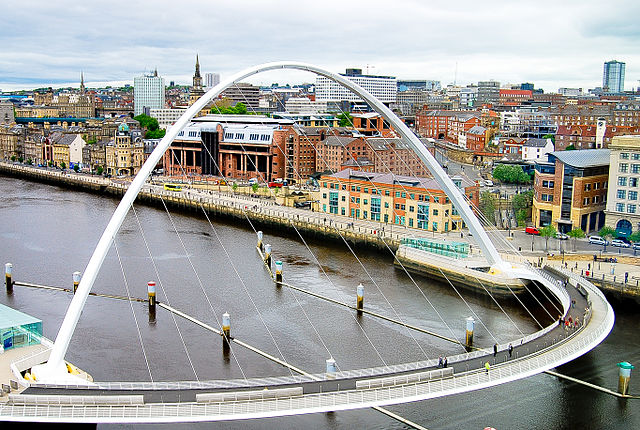 For those wanting to travel further afield, NCNs 72 and 14 will take you out to the coast to Tynemouth and South Shields respectively. There they join NCN 1, which will take you north up to Blyth (or beyond) or south to Sunderland (ditto). Or you could head inland instead: the River Tyne Trail is a peaceful way to travel to Wylam, perhaps starting from Newburn if you want a shorter family ride. Hybrids, gravel bikes, and mountain bikes are better for this section, as it’s not surfaced.

Any road ride from Newcastle will have an urban start and finish, but you can easily get out to Consett and beyond, into the eastern fringes of the North Pennines. Hexham is in reach too and offers the possibility of train-assisted return. Due south doesn’t offer much as it’s more urban stuff – mostly Gateshead and Sunderland. But to the north you can get to Morpeth without using main roads or being surrounded by urban infill. North and west of Ponteland, there are lots of small roads to utilise.

The nearest of the major mountain bike trail centres to Newcastle is Hamsterley Forest near Bishop Auckland. That’s 35 miles away. It has several biking trails, as well as walking trails, a play area, cafe, etc. Kielder Forest is 55 miles away and has over 100 miles of rideable trails, much of them singletrack. You don’t have to travel far outside the city to ride your mountain bike, however. Chopwell Woodland Park is only about ten miles from the city centre, and has red and black graded trails (for skilled and expert riders respectively).

Keeping your bike secure in Newcastle

Bike theft isn’t terrible in Newcastle. It’s a third of the way down the list, by post code area, for bike theft in England and Wales. That puts it about on par with Liverpool or Guildford. Avoid commuting on an expensive, high-end bike that will be attractive to thieves if you’ll be parking it outside in pubic view.