Being in a wheelchair is not a barrier to cycling. You just need the right machine: a hand-cranked tricycle.

Being in a wheelchair is not a barrier to cycling. You just need the right machine: a hand-cranked tricycle.

While they’re sometimes referred to as handbikes they’re almost always tricycles. A two-wheeler would have to be balanced by a hand on the ground when stopped, and would be awkward to mount and dismount. The most common format is the delta trike, with one wheel at the front and two at the rear. The front wheel tends to be the drive wheel, as this is simpler and uses a shorter chain. But driving the rear wheels, via a differential at the rear axle so they can rotate at different speeds when cornering, provides better traction, especially uphill.

A delta trike can be built as an independent vehicle or as a ‘clip-on’ to a rigid-framed wheelchair. The clip-on part provides the cycle element: a chain-driven, steerable front wheel, brakes, and hand cranks. The wheelchair becomes the rear wheels and seat. This is handy for commuting or shopping trips as you won’t need to carry a folding wheelchair on the handcycle; decoupling leaves you with your normal chair.

The other tricycle format is the tadpole trike, with two wheels at the front and a single drive wheel at the rear. This is more common among off-road handcycles as it provides better stability. Those designed for more difficult off-road terrain have a semi-prone, leaning-forward position, featuring a bucket seat, legs tucked to the rear, and a padded support for the chest.

A handcycle is legally a pedal cycle. It’s allowed anywhere a pedal cycle is, such as roads, cycle tracks, and rights of way like bridleways. (There may be practical impediments, however, such as cyclepath barriers or impassable singletrack trails.) It must have working brakes, although the rules are different for tricycles and for cycles whose seats can’t be raised more than 635mm from the ground. If ridden at night, it must have lights and reflectors.

A handcycle is not currently a recognised mobility aid, unlike a wheelchair. It’s a pedal cycle. That means you’re not allowed to ride it on the pavement and you could be asked to dismount if there’s a ‘cyclists dismount’ sign. Yes, even if you can’t walk – absurd!

Assisted handcycles are subject to the same rules as any other pedelec. They’re restricted to a 250W motor and an assisted speed of 25km/h. Since arms aren’t as strong as legs, the arguments for using electric assistance are more compelling.

Handcycles are more expensive than conventional bikes. They’re more complex and they’re made in smaller numbers by smaller companies.

Here’s a selection of what’s on offer. 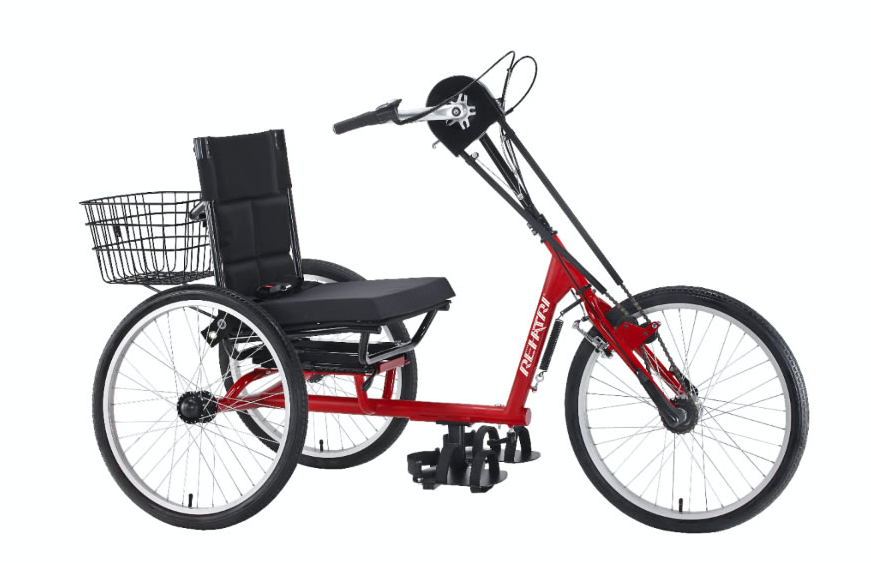 One of the least expensive handcycles, the Rehatri Upright is a delta trike with a 7-speed Shimano Nexus hub gear. At 29 inches wide, it’s narrow enough to fit through a standard doorway but the wheels are canted and so stability is good. There’s a back-pedal brake for the front wheel, plus a V-brake that doubles as a parking brake. The wheelchair-style seat is adjustable for different sizes of rider. 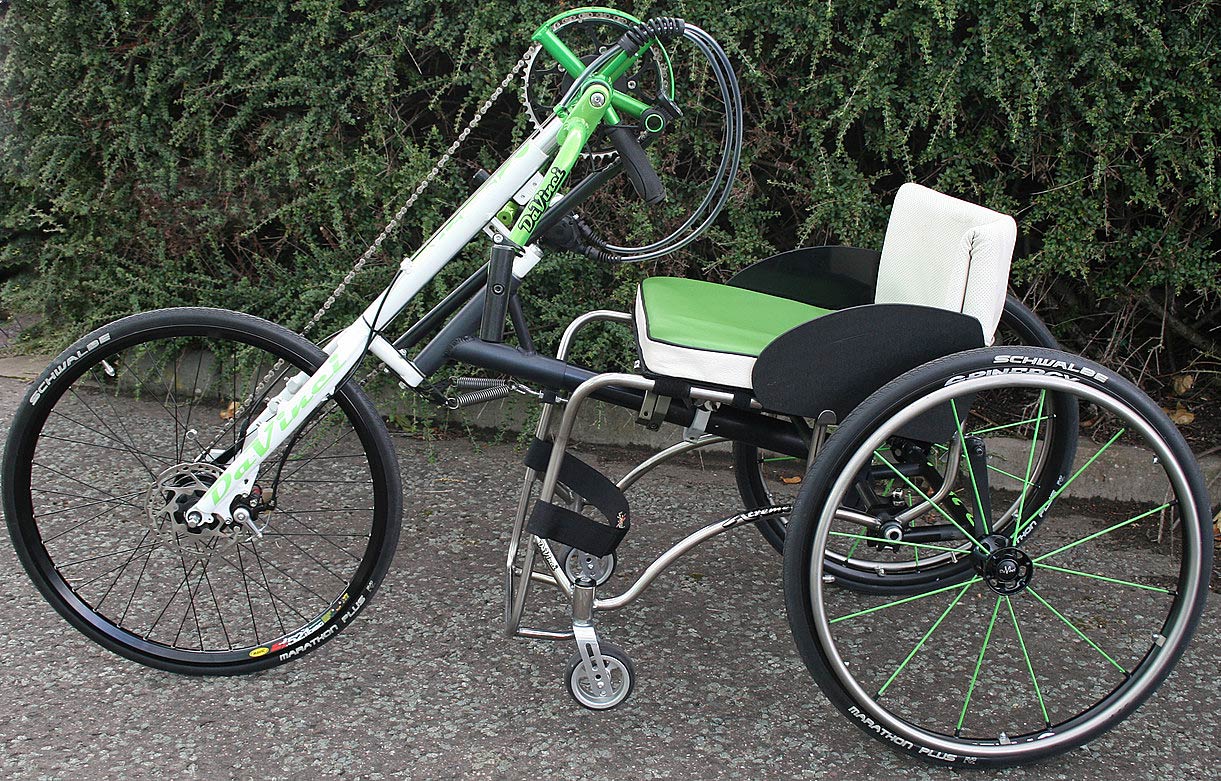 The DaVinci Veloce is a clip-on that transforms your wheelchair into a handcycle in moments. It’s available as the 8-speed version shown, with a Shimano Nexus hub and a back-pedal brake, or for £300 more as a 24-speed model. Electric assist is an option. All Veloce models are made from aluminium rather than steel so they’re relatively light. A parking brake and cycle computer are included, and there’s a range of upgrades available. 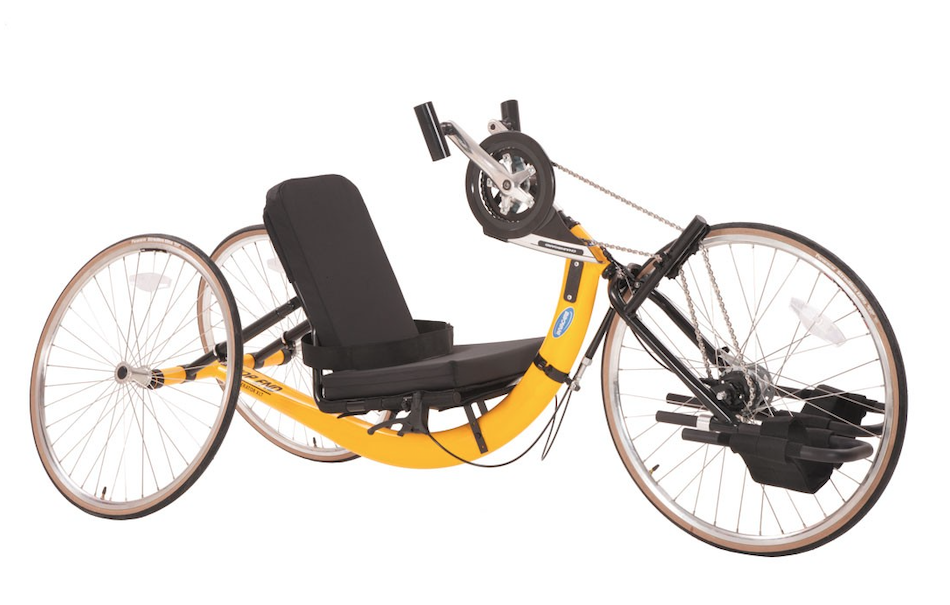 As well as a handcycle that’s similar to the Rehatri (the Excelerator), the Top End range includes sportier handcycles such as the XLT. A lower seating position makes it more aerodynamic, while the lower weight (only 14kg) makes it easier on hills and standstill starts. Steeply canted wheels keep it stable at higher speeds. It uses a 7-speed Shimano Nexus hub gear with a back-pedal brake, and also features a parking breaking. Lots of optional accessories are available. 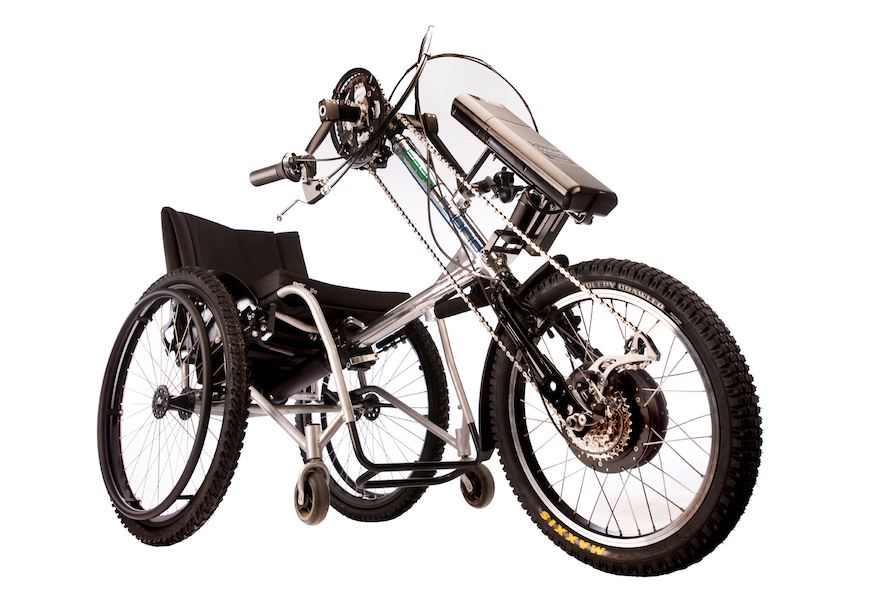 A clip-on with electric assistance, the Cougar S24 will manage 11-40 miles per charge depending on rider weight and terrain. There are two ways to use that power assistance: pedal assist, as with a conventional pedelec; and on demand, via a throttle. The latter provides a useful boost to get away from traffic lights or while setting off uphill. Gearing is a 3x8 Shimano Altus/Acera setup, which provides a wide range that’s handy for any unassisted handcycling. 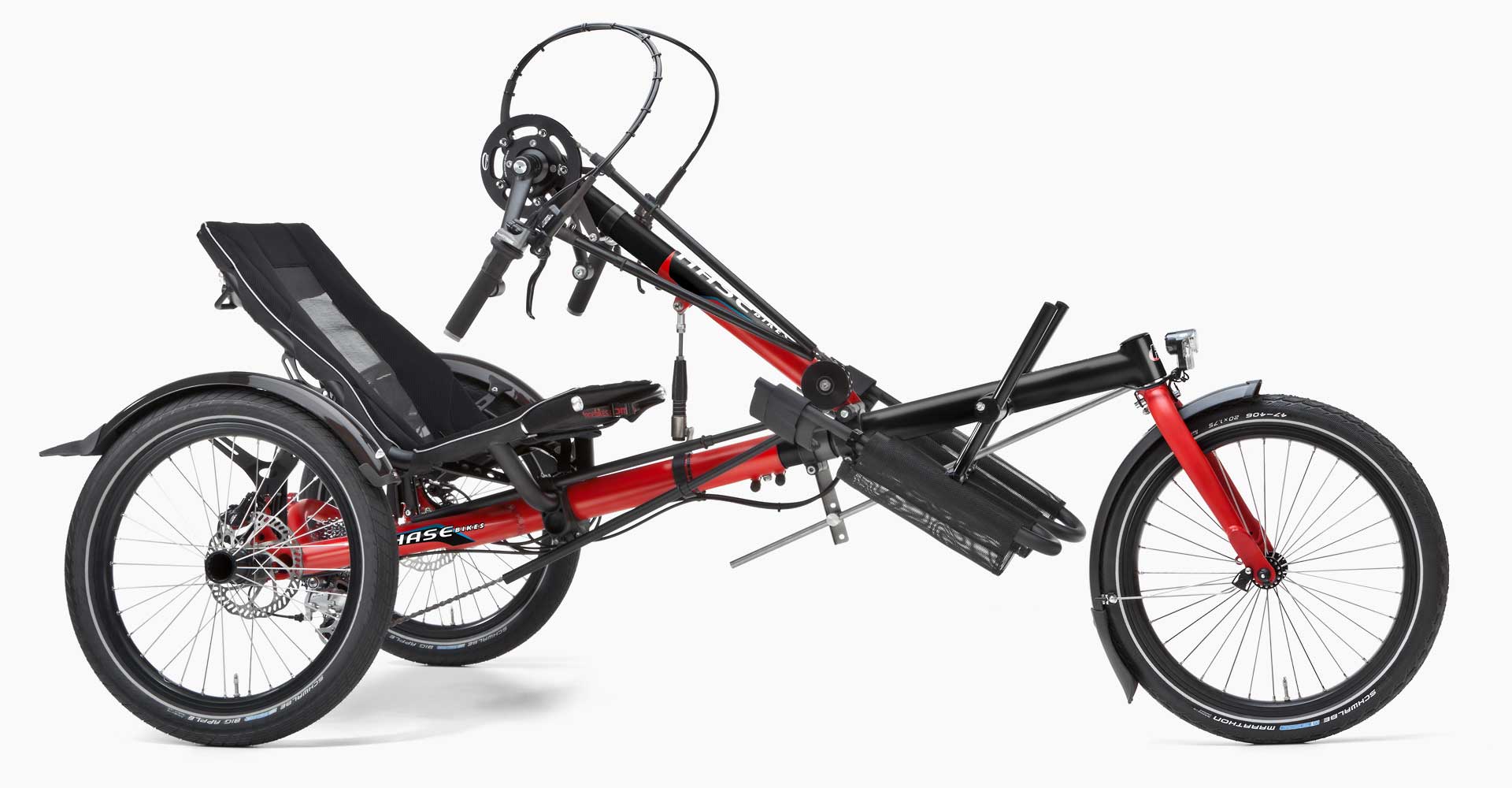 This high-end German delta trike is available in countless configurations, such as a shoulder-steered model for cyclists without arms and this hand-crank version. It’s a rear-wheel drive trike with a differential, the gearing a combination of a Shimano Nexus 8 hub gear with a Mountain Drive bottom bracket gear for a very wide range. Disc brakes do the stopping. Mudguards and dynamo lights are included and there are lots of other options, not least electric assistance.