Tricycles and cargo bikes make many more cycling journeys possible. Here’s a selection of some of the best.

Tricycles and cargo bikes make many more cycling journeys possible. Here’s a selection of some of the best.

Sometimes a standard bicycle isn’t the answer. Maybe you need to cycle with multiple children and/or heavy shopping. Maybe you need the balance-free stability of three wheels. Or perhaps it’s both. There are solutions, as there are for cyclists with disabilities, but you won’t find them in many shops: cargo bikes and tricycles.

These specialist cycles neatly solve the can’t-go-by-bike conundrum. They are, in a sense, car substitutes. So if their prices seem high, don’t forget how much you’re saving by not driving. And remember that you’ll save at least 25% on RRP and pay in instalments if you get the bike through Cyclescheme.

Cargo bikes and tricycles (whether cargo carrying or not) are bigger, heavier, and harder to store and transport than conventional bikes. Measure up any places your bike or trike will have to go before taking a test ride – something you’ll likely have to travel to do.

The bike prices in the list below are for a basic model. You can easily spend more if you choose accessories, electric assistance, or a better specification. 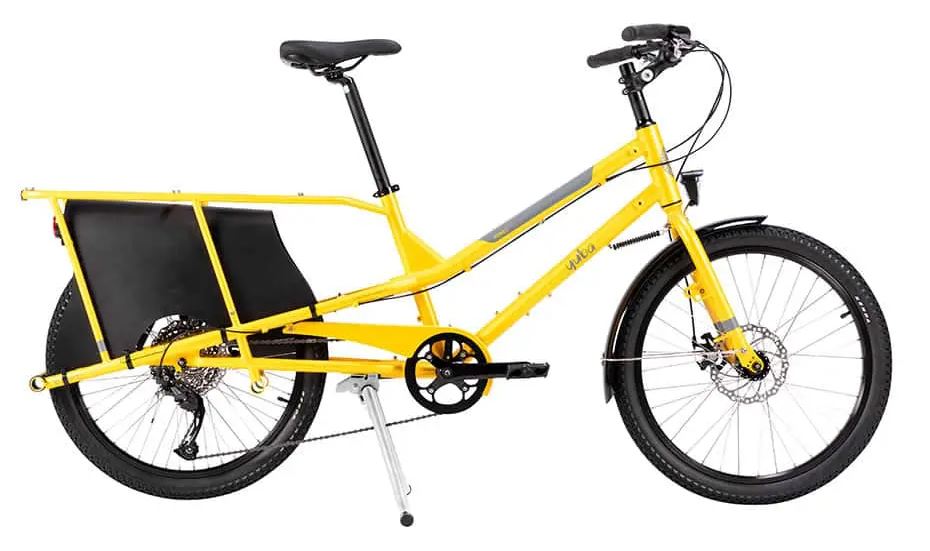 Most cargo bikes cost well over £1,000. Yuba’s entry-level ‘longtail’, the Kombi, does not. Its sturdy steel frame has an integral rear rack that will carry a couple of children (with optional deck, side boards, and bars) or a huge load; the bike is rated to carry 200kg. The wide-range 1x9 drivetrain should be sufficient for gentle hills, although for steeper ones you’d want the Kombi E5 electric-assist version. Thanks to its 24in wheels the Kombi is compact, with an overall length of 191cm. It comes with commuting essentials such as battery lights, mudguards, and a kickstand, and has a huge range of optional extras – including a rear rain canopy for kids. There are three UK stockists; follow the ‘dealer locator’ link on the website. 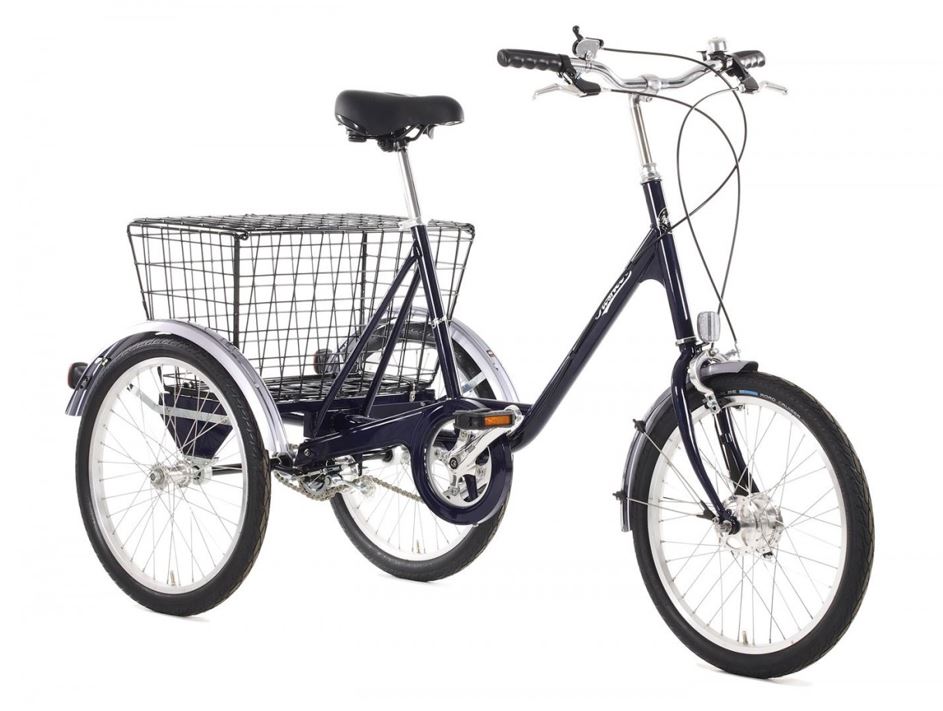 The Picador is a classic upright trike with a step-through frame and a big basket between the rear wheels. It’s not a cargo carrier as such – although Pashley makes a wide range of those – but it will haul your weekly groceries home. It’s designed for relatively short journeys around town, ideally ones that aren’t too hilly as it has a 3-speed hub gear. That hub gear is weatherproof and practical, as you can change gear while waiting at the lights, but the range is quite narrow. Mudguards and a chainguard provide more utilitarian touches. The riding position is upright, with a high handlebar and a wide sprung saddle. Think of it as a three-wheeled roadster for older riders or those with balance issues. Width: 70cm. 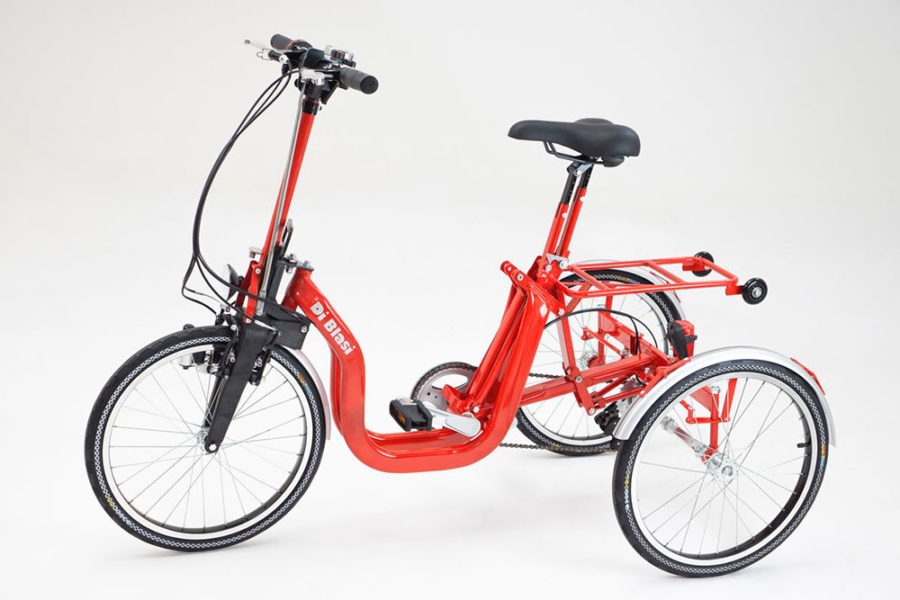 This 20in-wheel trike folds in seconds to a compact, castor-wheeled package measuring just 68x62.5x28cm. That’s easily small enough for a car boot or indoor storage. You could even take it on a train as luggage. While trikes aren’t technically allowed you’d be extremely unlucky to be turned away by the guard, especially if you stashed it in its optional stuff sack first. That would mean carrying it, however, and it weighs 21.4kg. Unfolded and ready to ride, it’s a step-through trike that caters well to riders with limited mobility. Like the Pashley, it suits gentler terrain best: gearing is a 5-speed derailleur setup. (There is an electric-assist alternative, the R34.) The wheel track is 66cm so it will go through doorways and gateways some trikes won’t. It comes in red, blue, or black. 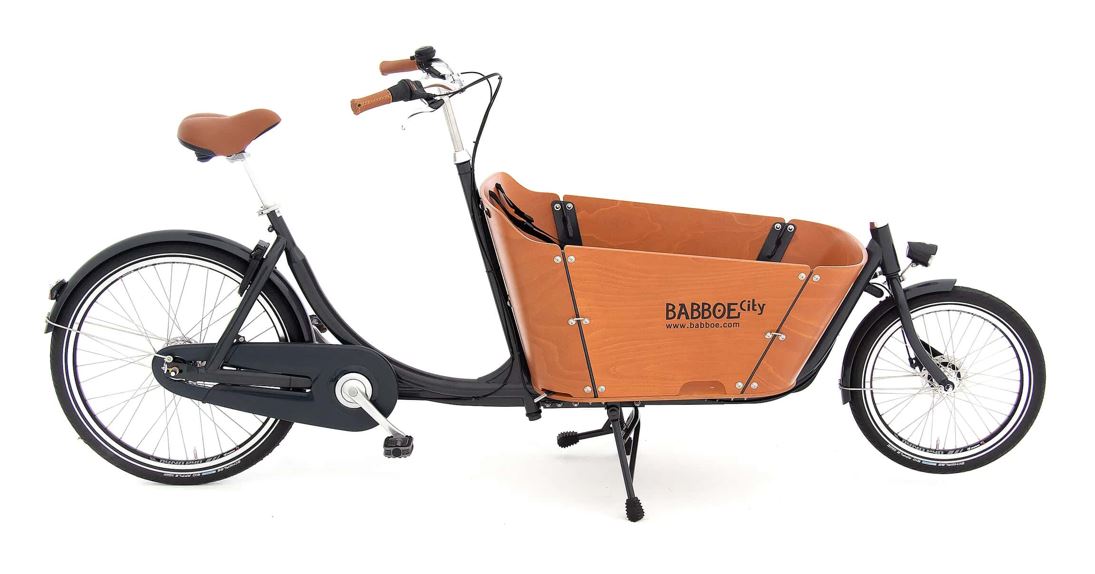 Babboe is a Dutch brand that specialises in affordable cargo bikes and trikes, both electric and pedal-only. The City is a ‘bakfiets’ (box bike) that will carry a couple of children on its seatbelt-equipped bench or up to 80kg of cargo. Since it’s smaller than many cargo bikes, at 65cm wide and 255cm long, it’s relatively easy and agile to ride. The gearing is a 7-speed Shimano Nexus hub, which is great for stationary shifting but might still be hard work if you don’t live somewhere flat like London or Cambridge. (Two electric versions are also available.) As it’s a Dutch bike it comes with practical equipment like lights, mudguards, chaincase, and stand. The box comes in black, grey, white, or wood colour. Optional extras include a rain canopy. 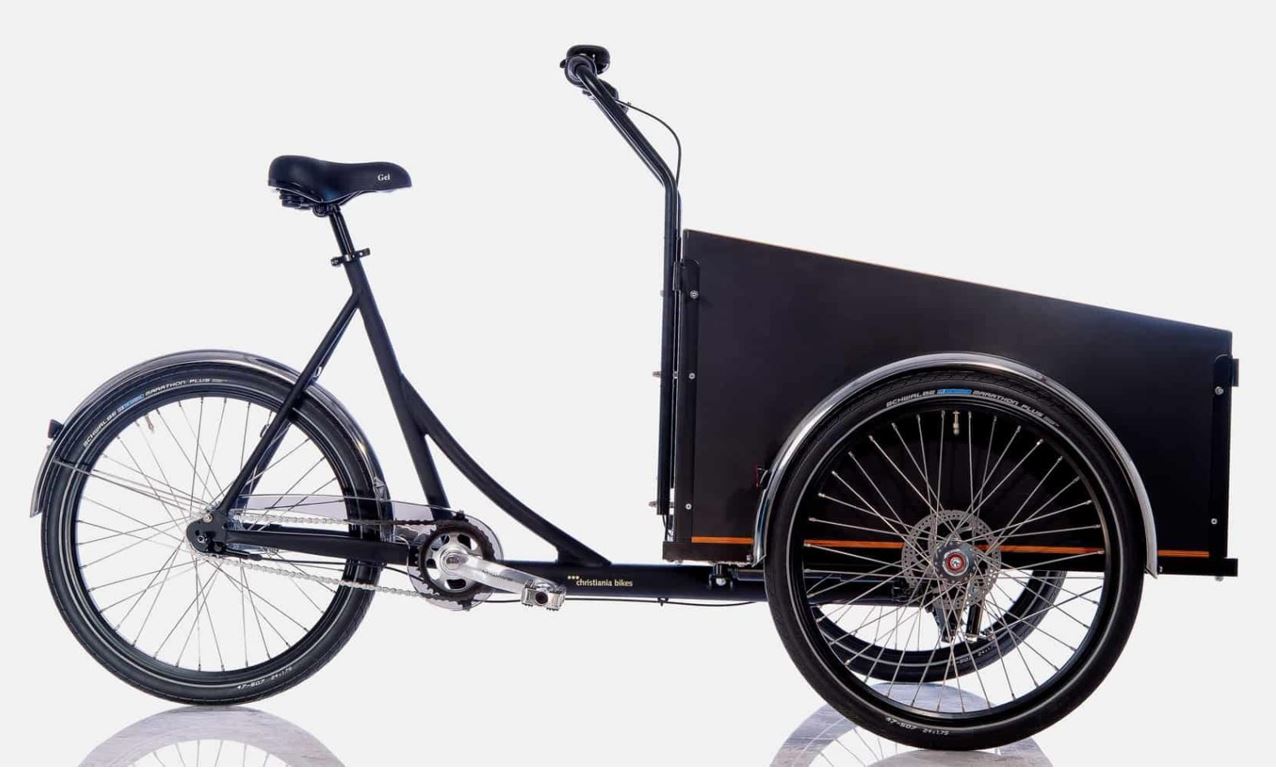 Danish box trikes like this have be ferrying children, wheelchair passengers, pets, and cargo around Christiania’s native Copenhagen for the best part of four decades. Nowadays you see them in the UK too. Various specifications and boxes are available, as well as two-wheelers and electric-assist versions. The price quoted for this Light Classic assumes a 7-speed hub gear (good for modest hills), a Bugatti hood (rain canopy), a soft seat for two children, and a frame lock. An extra bench can be fitted for carrying up to four children in total. Twin front disc brakes – normally mechanical – provide decent stopping power, which you need for a cargo trike. It weights 35kg by itself and will carry 100kg in its box. It’s 85cm wide by 208cm long. 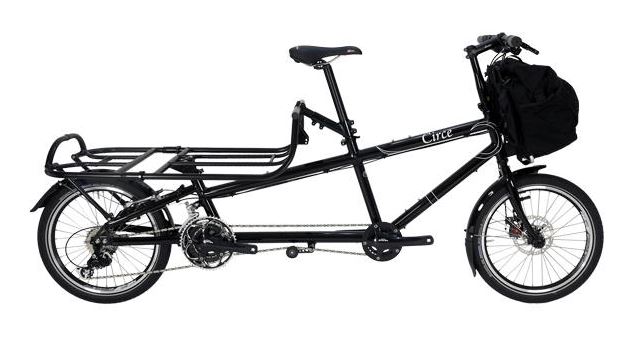 This looks like a tandem with a big platform rack replacing the rear rider’s seat and handlebar because that’s what it is. The cargo rack and tandem parts are interchangeable. Just buy the extra bits – in the case of the Brut, add a stoker handlebar, telescopic seatpost, saddle, and pedals – to be able to swap between formats. Clever! The Brut’s cargo rack (which includes Circe’s ‘cargo extension’) measures 80x47cm and will carry up to 70kg. If you swap the cargo extension for a conventional rear rack, the Brut will carry two toddlers in childseats. As a tandem, it can carry an adult or a child as young as three or four on the rear seat (because of that telescopic seatpost), plus a pre-school child in a rear childseat. It’s short for a tandem at 211cm long, thanks to 20in wheels, so is easy to store or transport.

The Bullitt is cargo bike you’ll see ridden by cycle couriers more than families. It’s sportier than other front-loaders. Thanks to a frame that’s aluminium rather than steel, its all-up weight starts at just 22.3kg. And at 46.5cm wide its load platform is narrower, making it easier to manoeuvre on busy streets. Time is money to couriers so those things matter. It nevertheless works well for things like groceries and child-carrying. You’ll want a box for the former – your own or one from Larry vs Harry – and the optional foldable childseat plus the Bullitt rain canopy  for the latter. You can carry one child like this due to the Bullitt’s narrower platform. To carry two children up front you’d need to source or build a wider box with a bench seat. The Bullitt is available with electric assistance. Fit riders may get by without even in hilly areas because wide range 3x10 gearing is also an option. 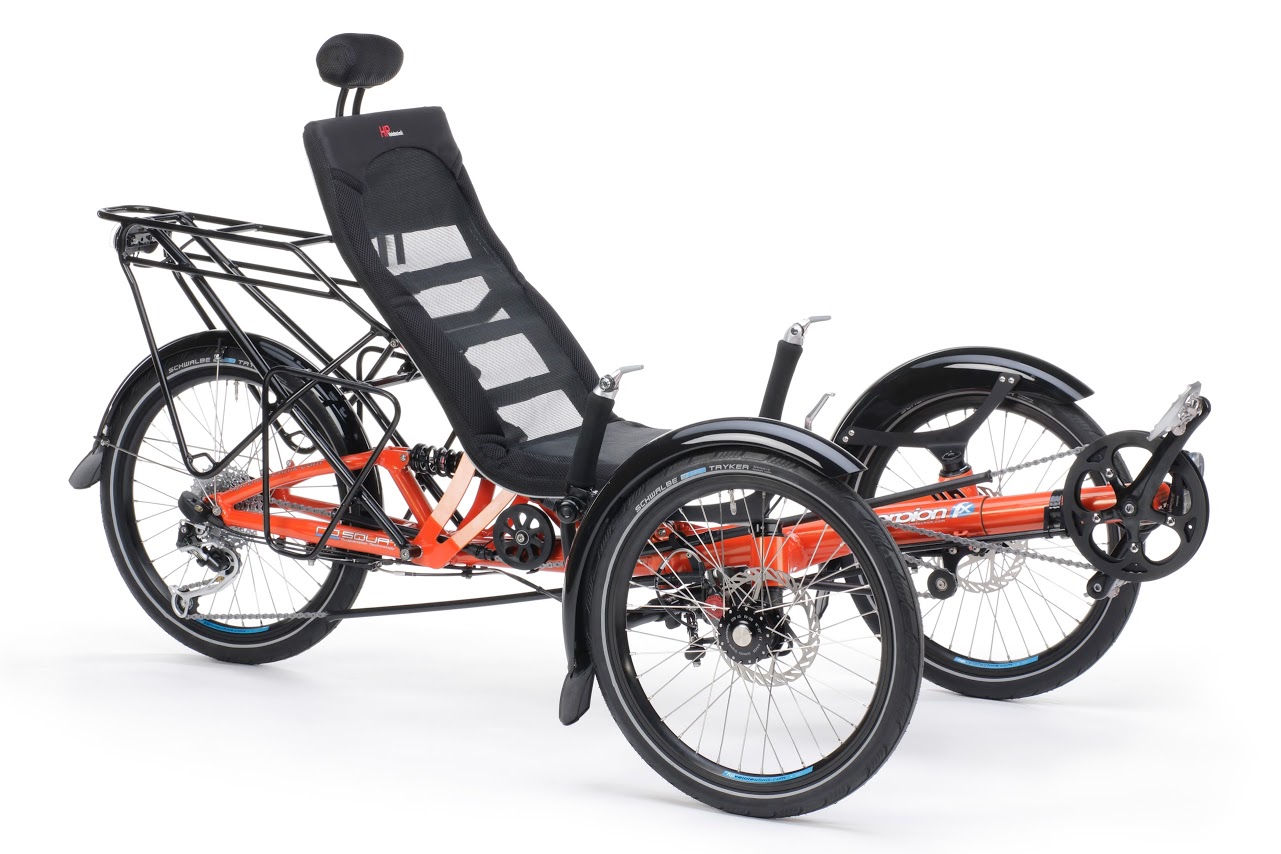 Recumbent trikes add comfortable sun-lounger-style seating and easier handling to the usual three-wheeler benefits. Racing models have really low, laid-back seats and sometimes fairings. The Scorpion fx is essentially a tourer, with a higher, more upright seat that’s easier to get on and off and that provides a head-up view of the road. Like a touring bicycle it has wide-range gearing, good brakes, and the capability to carry four panniers. While there are quite a few recumbent trikes like this, the Scorpion fx offers something else: it folds. The seat quick-releases, then you can fold the rear end over the front to fit it in, say, a car boot. Spend a few minutes disassembling it further, put it in its optional transport cover, and you should be able to get it on a train. It comes with many different specification options, including electric assistance.

The Kettwiesel is recumbent trike that can be configured to fit a hugely diverse range of cyclists. Riders as short as 4ft 3in and as tall as 6ft 7in will fit a standard model because the front boom – the bit where the cranks and front wheel are mounted – slides in and out of the main frame. Along with specification options you might expect, such as electric assistance or different gear systems, there are lots more to cater for different disabilities. Examples include one-handed controls for the cyclist having the use of one arm, and shoulder steering, hydraulic knee brakes and automatic gear shifting for the cyclist with no arms. It is, perhaps, the most adaptable off-the-shelf cycle there is. It’s 85cm long and 185-230cm long, depending on where the boom is set. If you’re short on storage space for it, it can be parked vertically. 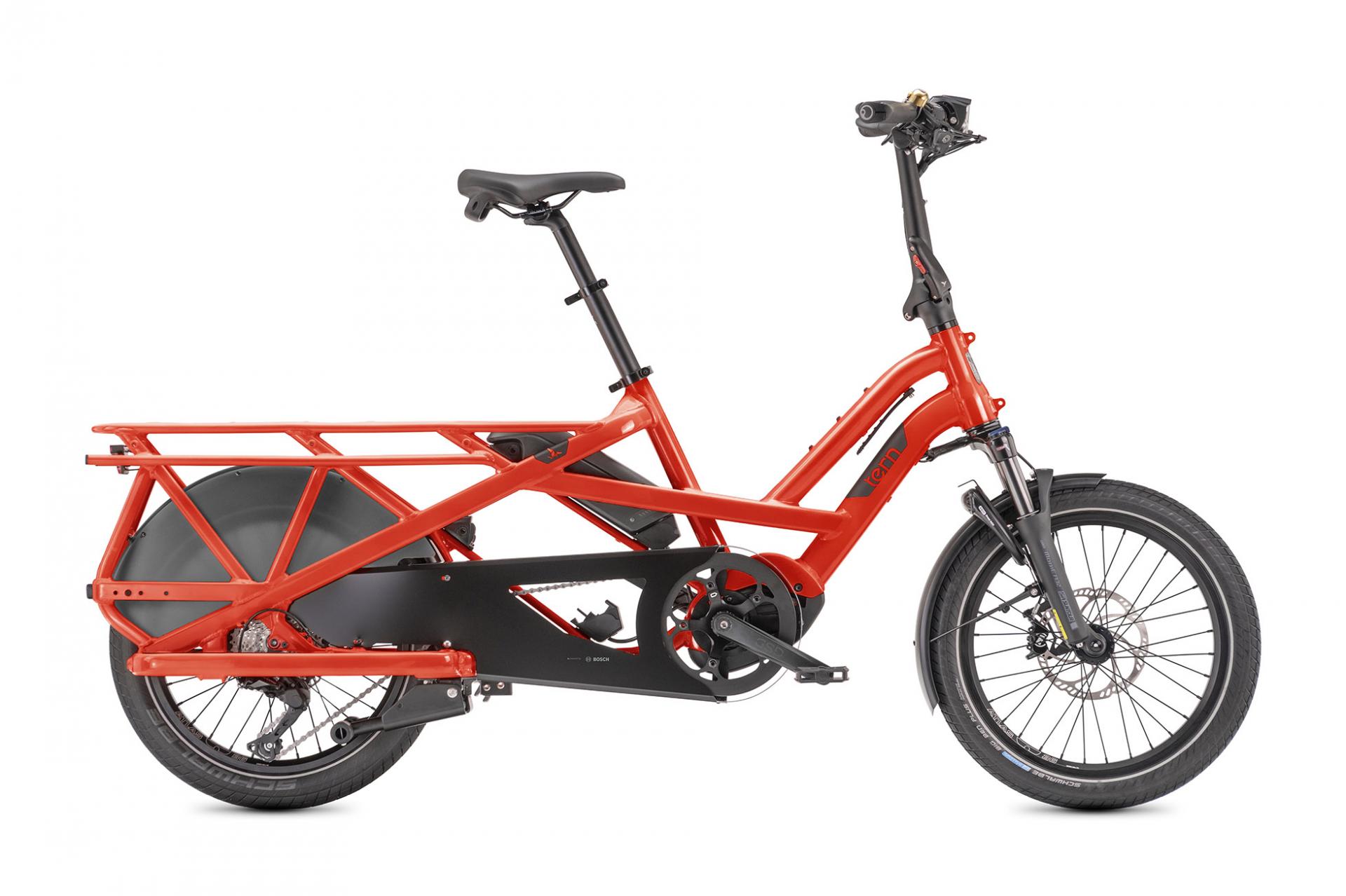 GSD stands for ‘get stuff done’. It’s a compact e-cargo bike whose 100kg-rated rear rack will carry shopping, two toddlers in childseats, two school-age children, an adult, or pretty much anything else you can think of. Hills? No problem. The Bosch mid-motor has plenty of torque and you’ll go up steep gradients without breaking sweat. If you’ll regularly be doing longer journeys, you can add a second battery. It’s easy to store for a cargo bike as it has 20in wheels, making it no longer overall than a standard bike with big wheels. The handlebar folds down and the seatpost is telescopic, so it will fit in many car boots or under a desk. It can even be parked on its end. There are loads of accessories available – bags, racks, passenger seating, a Storm Shield rain canopy to protect passengers from the weather, and more. This e-bike could easily replace a car.