With a bit more empathy and understanding, we'd all be happier and safer sharing the roads. Here are 10 key points for drivers.

1. We're not meant to ride close to the kerb

Cycling and motoring organisations advise cyclists to ride a good distance out from the kerb. In certain situations, in an effort to stop drivers trying to overtake dangerously, cyclists will 'take the lane'. That means riding in the centre of the lane.   If drivers overtake how the Highway Code suggests, a cyclist taking the lane shouldn’t impact on the situation. If a cyclist does this, it’s usually to promote safety, rather than hinder it.

There's no obligation for cyclists to use cycle lanes (on road) or cycle tracks (separate from the carriageway), just as there's no obligation for drivers to use motorways. Which is good when some bike paths are unfortunately unfit for purpose.  Cycle lanes can lure you into the gutter or the dangerous edge of roundabouts. Cycle tracks can be narrow, obstructed, or shared with pedestrians. Almost every cycle track gives way to every road it intersects, making progress slow.

Having said that, motorists must remember that there is a penalty for driving in a cycle lane. Drivers can face fines of up to £130 for straying into cycle lanes. This might seem excessive, but with lives at risk, there must be stringent measures in place to discourage it.

4. Sometimes we wobble or swerve

Another reason to give cyclists room on the road is that sometimes there is no choice but to wobble or swerve. A bike has to be balanced and won't always travel in a perfectly straight line. A sudden gust of wind, whether it's a crosswind or the backdraft of a vehicle passing too close, can upset a cyclist's steering. A pothole in our path might cause us to crash if we don't dodge around it.

5. Everyone needs to communicate

Mirror, signal, manoeuvre - let's just communicate with each other. Use indicators (especially at roundabouts), make intentions clear and for those in cars, make sure you check for bikes before opening the door. It’s uncomfortably common for cyclists to get 'doored'… 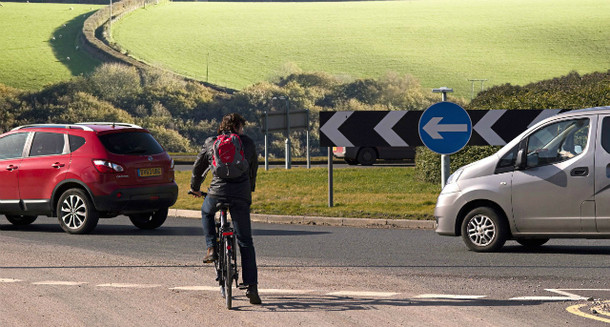 6. We're moving faster than you think

There probably isn't time for you to pull out of that side road when we're coming towards you on the main road. Or for you to overtake us, brake, and turn left into a side road. Cyclists move far faster than you might think….   Most cycle commuters can comfortably do 15mph and fitter cyclists on road bikes can cruise at 20mph. Downhill cyclists might be travelling at 40mph or more. As a general rule of thumb for a driver: if you wouldn't attempt a manoeuvre when another car is that close, it's probably not safe to when a cyclist is that close either.

It's frustrating when you're driving, and someone foolishly pulls out on you or cuts you up. Imagine what it's like when what's at stake isn't a dented bumper, but the very real risk of serious bodily harm. It’s in this moment that a cyclist might swear or make a gesture…That flash of anger isn’t road rage: it's fear.

Highway Code Rule 163 tells drivers to 'give motorcyclists, cyclists and horse riders at least as much room as you would when overtaking a car'. Horse riders tend to be given space, with drivers passing wide and slow. Unfortunately, cyclists are often passed by cars far, far closer. One wobble from the cyclist or a misjudgement from the driver and someone is likely to hit the tarmac… so let’s make sure that everyone keeps their distance.

9. Not all cyclists are the same

It probably was annoying when you saw that cyclist jumping a red light. It's equally annoying, with more serious potential consequences for others, when drivers exceed the speed limit. But not all cyclists jump red lights and not all drivers speed...

A bad move from one cyclist or one driver shouldn’t leave us associating all cyclists or all drivers as bad road users. Let’s just agree that we’ll all try our best to use the road well, rather than creating a them-and-us situation.

10. It's other traffic that really slows you down

Waiting 10 seconds to overtake a cyclist will make no detectable impact on journey time. What really slows you down is sitting in near stationary queues of other cars, where lots of vehicles are trying to funnel through a limited amount of road space. It might feel frustrating when cyclists blithely filter past, but every cyclist who does this instead of driving is one car fewer in the queue. Cyclists help to reduce traffic jams.

That’s just about the most important ten things that cyclists wish were taught in driving lessons and speed awareness courses! We’ve made our case but what about the questions we often face from motorists? We’re going to cover some of the classics:

…get off the pavement?

It might be because: a) it's a shared-used path; or b) the cyclist considers the road there unsafe. Shared-used paths aren't always obvious; sometimes there's nothing more than an occasional blue sign to indicate it's intended for cyclists too. Technically, if it’s not a shared-used path then it is against the law for adult to ride on the pavement.

The safety issue is trickier. Any adult cyclist lacking the confidence to cycle on the road ought to get some cycle training. But no one expects young children to ride on the road. And if the choice is between, say, a busy dual carriageway or a quiet footpath alongside it, many adults would choose the path. Police discretion is therefore a useful tool when it comes to issuing Fixed Penalty Notices for pavement cycling.

Because filtering through traffic is legal and saves time. Advanced Stop Lines (ASLs) for cyclists are common, because highway engineers actually endorse filtering. Filtering lets cyclists get to the head of the queue, so that they can get through the junction before being overtaken. This reduces the risk of accidents. What cyclists are not allowed to do however, is wait in front of the stop line, so if there's no ASL they'll need to wait at least one vehicle back. 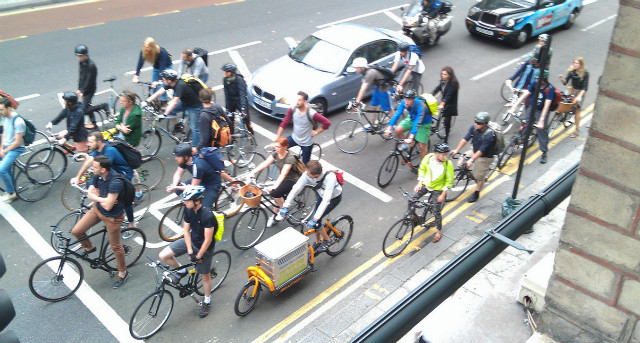 …need a licence and a number plate?

Because a bicycle licence would cost more money to implement than it would bring in in revenue. And because cyclists, like pedestrians, can be identified by their faces, unlike drivers who are hidden by their vehicles. Cycling training is excellent, but a mandatory test would reduce cycling levels, particularly among children.  Broadly speaking, you need a licence to do things that are potentially dangerous to others or involve going onto private property. So, licences are required for cars, firearms, or fishing in someone's pond. They're not required for pedestrians or cyclists.

Because it's not a legal requirement in the UK, unlike when riding a motorcycle. Many cyclists do choose to wear a helmet anyway, but there are others who believe that they are ineffective or in actual fact, more dangerous. Arguably, helmets do offer some head protection - but you're approximately as likely to require such protection while driving, walking, or stepping out of the shower.  Cycling organisations in the UK – British Cycling, Cycling UK, and the London Cycling Campaign – all endorse the legal position: the right of the individual to choose to wear a helmet or not.

Because it's not a legal requirement. On a national level, uninsured cyclists are not a significant problem – unlike the million or so uninsured drivers. Like pedestrians, who are also not obliged to have insurance, cyclists have a limited capacity to cause harm. Many cyclists nevertheless do have third-party insurance, either via their home insurance policies or through membership of a cycling organisation. Given how much time you'll spend on your bike as a cycle commuter, third-party insurance is well worth having. We’d recommend looking into it.

Because it’s their personal choice. For short, urban journeys, a bike is often quicker (and cheaper) than a car. Plus, it's healthier thanks to the daily exercise a bike provides. Added to the fact that cyclists cause fewer road deaths, produce less air pollution and reduce traffic jams and noise pollution.

Because cycling side-by-side is more sociable and isn't against the law. The Highway Code (Rule 66) says: 'never ride more than two abreast'. Given that two cyclists abreast take up less space than a car, it won't affect drivers who overtake in accordance with the Highway Code; these drivers will already be on the other side of the road. A group of cyclists riding side by side can be easier to overtake than a long line in single file, as it will take half as long to pass them. That said, there are circumstances such as busy roads where it's courteous for cyclists to switch to single file.

Riding Bikes Side by Side

To expand on the last question, we think it’s time to clear up some of the furore around riding two abreast. People often ask, “can cyclists ride side by side”? And the answer is an overwhelming yes. Not only are cyclists allowed to ride two abreast, it’s safer for them to do so when riding in a group.

A video starring Chris Boardman, explaining why it’s okay for cyclists to ride two abreast has gone viral, with hundreds of thousands of hits on YouTube and Vimeo. The video, titled Side by Side, rule 163 of the Highway Code: that cyclists should be given as much room as motor vehicles when being overtaken. Among supporters for the clips, which also feature master driving instructor Blaine Walsh, are motoring organisations, and there are hopes that they will be adopted as official road safety videos by the Department for Transport.

Olympian and British Cycling policy advisor Chris Boardman said the popularity of the video shows “a genuine desire for a culture of mutual respect on our roads to thrive”.

He said: “The response so far has been extremely encouraging. Our aim was to make people more aware of rule 163 of the Highway Code. Getting more people on their bikes will have a series of benefits for this country and ensuring that the roads are safe places for cyclists is a crucial step towards this.”

So, there we have it - there are mistruths and misunderstandings all over the place when it comes to cycling on the road. One thing that is clear though, is that motorists and cyclists are all safer on the road, as long as there is mutual respect and understanding.