How to communicate with drivers 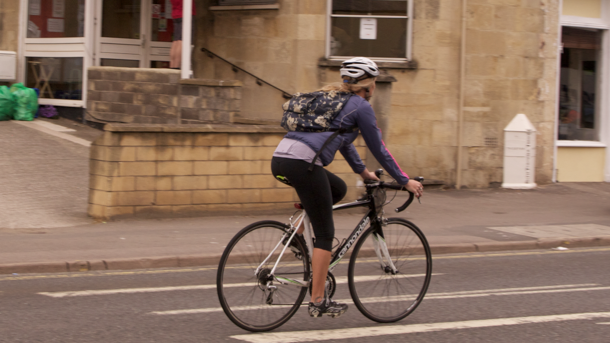 It's not a war, it's negotiation. Sometimes careless people – on four wheels, two wheels or on foot – will do something foolish. By and large, 'traffic' is a collection of reasonable people just trying to get where they're going. If you act like traffic, politely and assertively, you'll be treated like traffic.

Sometimes careless people – on four wheels, two wheels or on foot – will do something foolish. By and large, 'traffic' is a collection of reasonable people just trying to get where they're going. If you act like traffic, politely and assertively, you'll be treated like traffic.

Cycling in the right part of the road is the most important thing you can do for your safety.

Do not ride in the gutter. ride a metre out from the edge, so you're in the traffic stream. This tells drivers that it's your road too and that they will have to overtake properly to pass you instead of squeezing by. Where necessary, take the lane instead: ride down the centre of your lane. This tells drivers that it is not safe to pass. While this may frustrate drivers who don't understand why you're doing it, you'll still communicate the 'stay back' message. 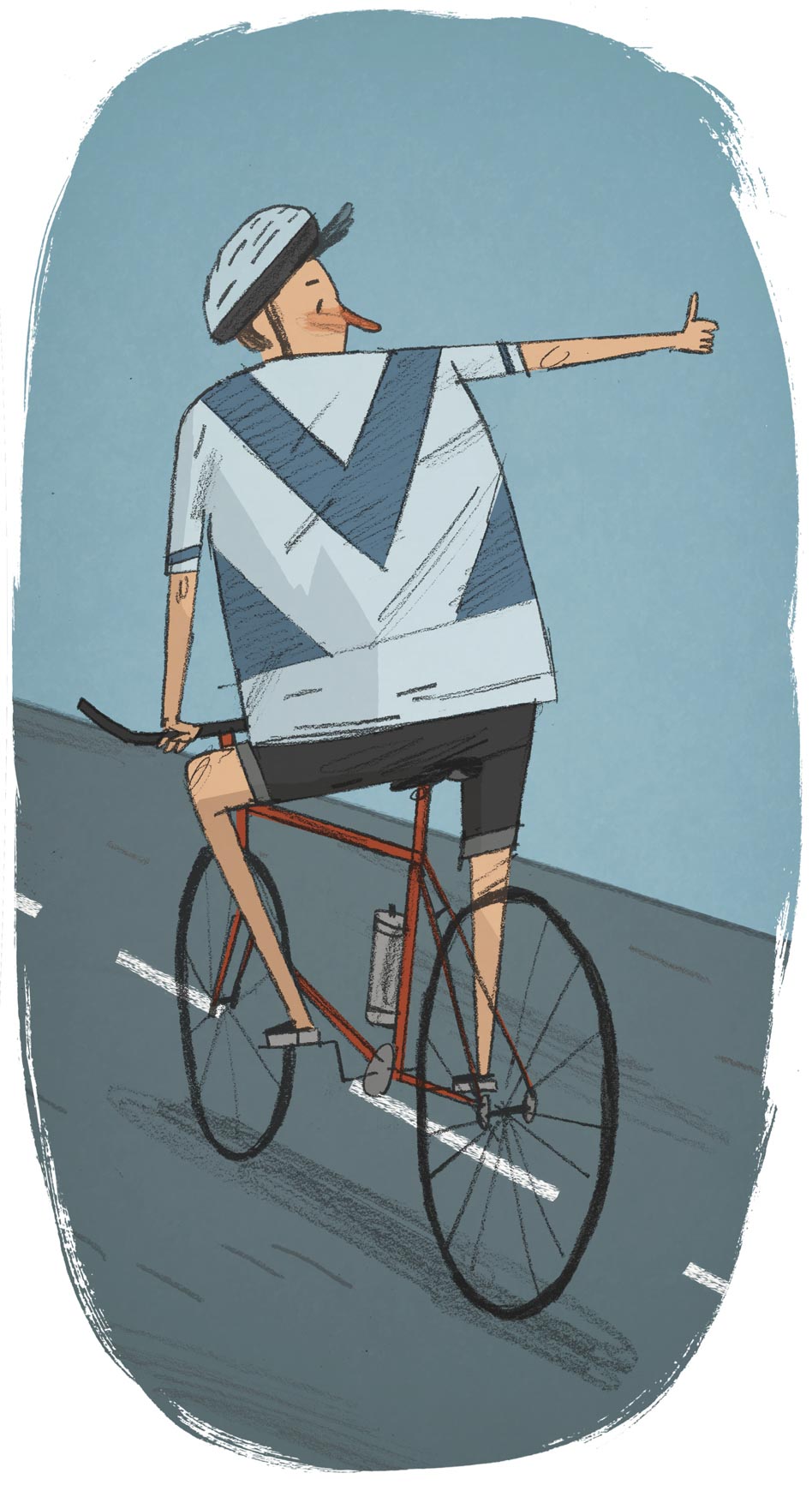 Don't change your position on the road without checking behind you. It's possible to glance back while keeping both hands on the handlebar. The safest way to look around you when cycling is to look down and back rather than try to twist around, as you're less likely to veer out. For a proper look, take your right hand off the handlebar so you can twist your upper body around. Looking over your shoulder like this is a signal to drivers that you're about to do something.

Indicating when cycling isn’t asking permission - it’s telling other road users what you're about to do. Signal boldly, with your arm horizontal. If there is following traffic, stare at the driver nearest to you. Has the driver seen you? Is he or she reacting? When you get a reaction, or you have enough space to get a reaction in good time, begin your manoeuvre. 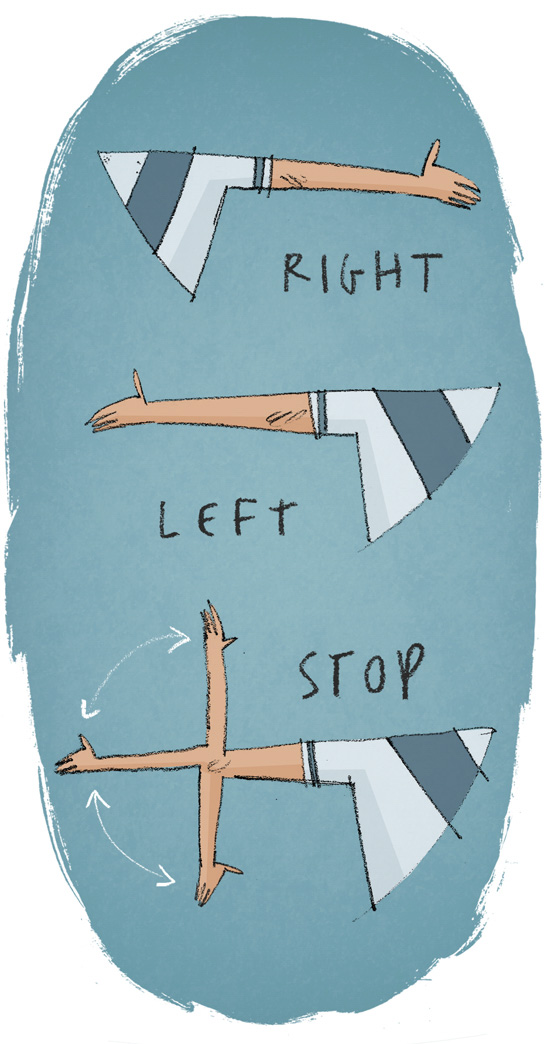 Indicators are obvious clues but don't depend on them. Assuming drivers have seen you signalling or understand what you mean can be dangerous.

Where is the driver looking? If the driver hasn't looked directly at you, assume you haven't been seen.

What is the car doing? If it's slowing to give you space and you've eyeballed the driver, start to take that space. Drivers often yield priority by flashing their headlights. It means 'after you'. Some will wave or point, which can be confusing.

Only go when you're sure it's safe to do so.

Courtesy Between Drivers and Cyclists

If a driver has patiently waited behind you or has yielded or acknowledged the right of way, there's no harm indicating your thanks. A nod and smile, a brief wave, a thumb's up sign – any of these things let the driver know that you're grateful.

Be wary of encouraging drivers to pass you by waving them on; if they can't see past you, they ought not to overtake. On the other hand, if you've seen an oncoming car and the driver behind hasn't, don't hesitate to hold your arm out, palm towards them like a policeman: 'stop!'

In normal circumstances, you'll often hear a vehicle before you see it. Engine noises can tell you whether a driver behind is slowing down or about to overtake. (Note that you are almost silent and that many pedestrians will start to cross a road based solely on what their ears tell them...)

Wearing headphones when cycling puts you in unnecessary danger. Don’t do it.

How to Get Drivers to Hear You

Bicycle bells are useful to alert pedestrians of your presence but can't be heard inside vehicles. Some electronic or high- pressure pneumatic horns, such as the Hornit db140 and the Air Zound, are plenty loud enough. Remember that they're for alerting others and not venting frustration, and that using a bell or horn can delay evasive action. In an emergency it's often better to shout – a simple 'No!' or 'Look out!' can freeze someone in place. A polite greeting or spoken warning, such as 'good morning' or 'cyclist behind', alerts pedestrians and horse riders in other circumstances. 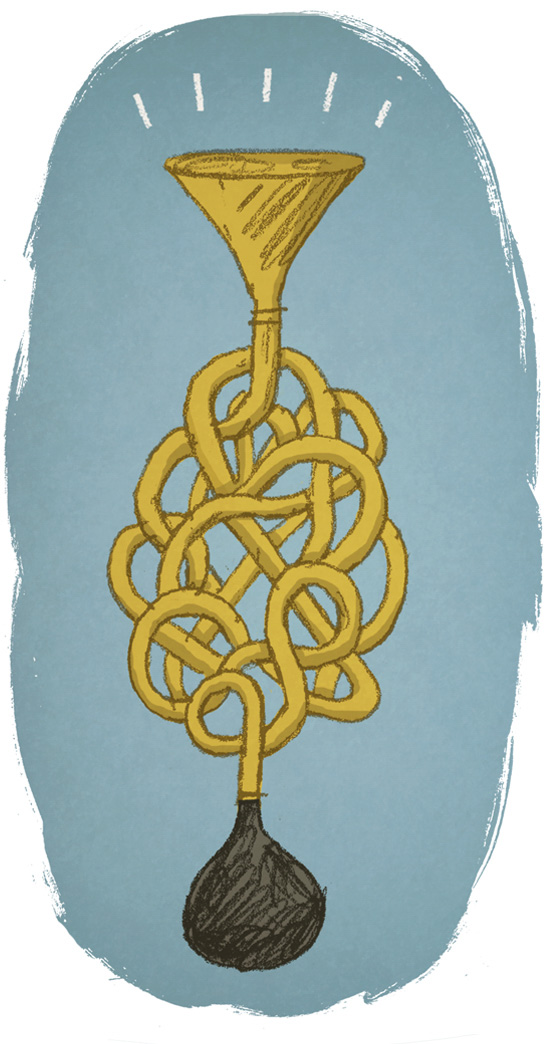 Seeing Drivers (and Being Seen)

A bicycle mirror is a useful addition if you have hearing problems or struggle to look over your shoulder. They're pretty useful anyway to keep an eye on following traffic. It's still preferable to look over your shoulder as well if you can, as this will give you a better field of view and will cue drivers that you're about to act. Electronic indicators for bicycles are pointless unless you're unable to make hand signals. Hi-viz highlights on jackets and gloves, however, can emphasise your arm signals at night.