How to use hand signals on a bike 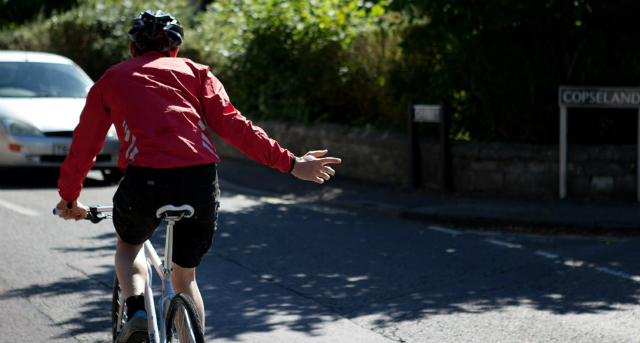 Cycle commuting is quicker and safer when drivers immediately understand where you're going next.

On a bike, arm signals are one of the ways that you become part of the traffic flow. They draw attention to you and tell other road users what you're doing next. There's more to it, however, than just sticking an arm out.

Signalling involves taking one hand off the handlebar. If you're just getting back into cycling or you have a new bike, make sure you can ride it confidently one-handed. Some bikes – particularly road bikes and compact folders – can steer quite 'nervously' with just one hand. Practice steering and braking with either hand.

When you signal, do so boldly. Hold your whole arm straight out at a right angle to your body and use the whole of your hand rather than a single finger. Such a signal is obvious and unambiguous. It tells other road users you really mean it. You're not meekly asking permission. You're saying: this is where I'm going next.

Signalling doesn't guarantee you the right of way, however. It's part of a process of negotiation. Go where you're indicating only when you're confident that you can do so safely. Look behind, signal, eyeball the driver to assess the situation, and then go. Signal your intentions in plenty of time, not when you arrive at the junction. That gives you time to negotiate with other road users and to manoeuvre gradually. 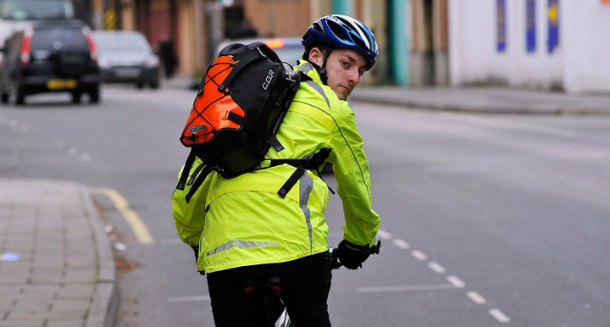 Sometimes – on a roundabout, for example, or while moving across the carriageway towards the centre of the road when turning right – you may want to signal continuously. If you find this difficult, perhaps because the road is badly surfaced, steeply graded, or because it's windy, don't do it. Being in control of your bike is more important. Signal boldly and briefly (before each exit on a roundabout), and then return your hand to the handlebar. Let your road position communicate your intention.

Right arm when turning or moving right, left arm when turning or moving left. That's it, right? Not quite. You might also signal right when you're moving off from the side of the road, when you're moving from one lane to another, or when you're passing a parked car. You might signal left ahead of your exit on a roundabout, or when pulling in to the side of the road to stop. You'll probably signal right or left when merging back into the traffic stream when filtering. Yet you might go right or left without using an arm signal at all.

Arm signals are to inform other road users. If there's no one else about, you don't need to signal. Hence the use of the word 'might'. Additionally, communication with other road users isn't just about arm signals. Your position on the road and the direction you're looking also tell people where you're going next. The better your road positioning, the less you need to signal with your arms. For example, if you've already taken the lane, there's rarely any need to signal right to pass a parked car. Any traffic behind can see that you're going to pass it, because you're in the traffic stream.

Holding out one of your arms isn't the only way to signal by bike. Here's a couple more that you'll find in the Highway Code.

• Right arm making a downward flapping motion = 'I'm slowing down.' It's a legitimate signal but it's pretty much fallen out of use. It may puzzle other road users. If you're pulling over to the left of the road to stop, a left-turn signal is probably more likely to be understood.

• Right hand held up from the elbow, palm forward, when stopped at a junction = 'I'm going straight ahead.' This is another signal that's very rarely used. Other road users may think you're waving.

Conversely, there are signals that are widely used that don't appear the Highway Code's section on arm signals. Some of them, in fairness, aren't arm signals.

• Looking back over your right shoulder = 'I might be about to turn right or change position on the road.'

• A sweeping, beckoning gesture with your right arm = 'Please overtake, driver behind. It's safe to do so.' Be careful about using this one. You don't want to accidentally wave a driver into oncoming traffic that you haven't seen. It's generally best for drivers to overtake only when they can see far enough ahead to do so safely.

• Hand held palm out towards the rear = 'Don't overtake, driver behind. It's not safe.' This is more useful. A worrying number of drivers will attempt to overtake on blind bends or blind summits. This at least warns them if you've seen or heard something coming that they haven't.

• A sweeping 'after you' gesture at a junction or crossing = 'Please go ahead, pedestrian or other road user. I'll wait.' It's a courtesy. What goes around comes around.

• One hand held up from the elbow, palm foward = 'Thanks.' It's a brief wave of acknowledgment. Be wary of making any thank-you gesture more complex than this or a thumb's up, as it may be misinterpreted as an obscene hand signal.

• Smiling = 'Good job, fellow human!' Can be used in conjunction with a thumb's up or wave.