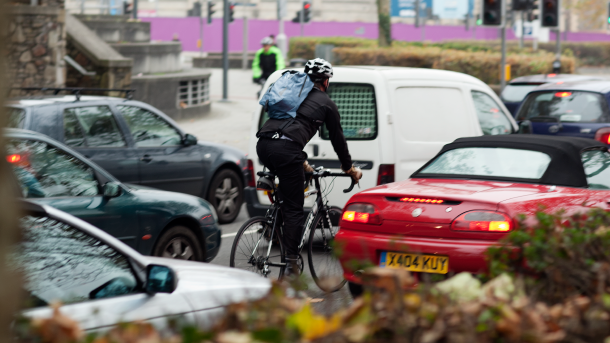 Filtering means moving past queues of stationary or slow-moving traffic. Go to any town or city and you'll see cyclists and motorcyclists doing this.

In some circumstances, you can even pass on the left. It isn’t illegal for cyclists to undertake vehicles but it comes with a critical warning: never, ever undertake a long vehicle such as bus or an articulated lorry unless it is completely stationary and will remain so until you are safely past.

If in any doubt, don't attempt to undertake. You will be in the driver's blind spot. If the vehicle moves to the left a little or, even worse, begins a left turn, you may go under its wheels and die. Some lorries even have signs for cyclists on the back nowadays, saying 'Right side' (on the off side) and 'Suicide' (on the near side).

When cyclists should filter traffic

If you will pass only one or two vehicles, it's seldom worth filtering. Take the lane instead, so that vehicles behind you won't squeeze past you.

If there is a queue of traffic that's stationary or moving at around walking pace, then as long as there's space to do so safely, it's worth filtering. As its name suggests, filtering is not one manoeuvre; you will move out of the traffic stream and back in again, possibly multiple times.

Before changing your position on the road, look over the relevant shoulder first. Even in stationary traffic, a cyclist or motorcyclist may be in motion right behind you.

Filtering on the right

As a rule, you're better off filtering on the right. Drivers expect to be overtaken on the right and they're more likely to see you in their off-side wing mirror. Oncoming traffic can see you more easily too, so you're less like to have oncoming traffic turn right across you. You'll also have more room to manoeuvre.

Pass with plenty of space and don't feel obliged to stay in your lane. Cyclists can filter past a traffic jam by crossing the dashed white line and riding in the oncoming lane – as long as it's clear. Any oncoming traffic has right of way. Oncoming drivers may pull over to the left to give you room. If not, you need to rejoin the traffic stream (see below).

Be alert, especially where there are junctions to your right: drivers you're filtering past may turn right with little or no warning. Or they may attempt a U-turn. Watch out for road furniture too, such as traffic islands, and for pedestrians crossing the road in between vehicles.

Filtering on the left: undertaking

Overtake on the kerb side only if the traffic is stationary and there's no room on the right-hand side. If in doubt, wait. Good road positioning means not hugging the kerb. So don't dive into a riskily narrow roadside gap, even if it's a painted-green bike lane or another cyclist has just done so. If you're next to the kerb, you have no room to manoeuvre.

Take care when passing side roads, as the rest of the traffic may not have seen you. And keep an eye out for passengers stepping off buses or out of cars.

You'll need to slot back into the traffic queue when it moves off and its speed approaches yours, or when oncoming traffic forces you to get back into your lane. Avoid braking suddenly or forcing others to do so by planning ahead - and by not racing past stationary traffic.

As your speed and the traffic queue's speed converge, check over the relevant shoulder, eyeball the driver, signalling left or right as necessary, and take the lane. If the traffic becomes fast moving, you may wish to move to the secondary position so that drivers can pass you more easily.

If there's isn't a bike length between vehicles, stop behind and off to one side of the vehicle in front. Eyeball the driver behind, and if necessary signal your intent to move back into the traffic stream. When the traffic starts moving, take the lane.

If there are two lanes going in your direction and you need to move between them when filtering, give way to traffic in the lane you're moving into.

When there is lots of space between stationary traffic streams, you may be able to ride between them. Do so cautiously and be alert to the traffic in either lane starting off. When traffic starts to move, aim to take the lane in the left-most lane that's going where you want to go.

Advanced Stop Lines are those green boxes with a bicycle painted in them at junctions. They enable you to start off first and avoid being cut up by drivers. Only attempt to get to the Advanced Stop Line (ASL) if you can do so safely. It might be better to pass traffic on the right or wait a few cars back than to trust to that narrow, kerbside cycle lane that leads to the ASL.

When you get to the ASL, particularly if you did enter from the far left of the road, take the lane.

If there isn't an ASL, you are not permitted to go past the stop line for drivers. So don't pull across in front of the lead car. Wait behind it, taking the lane if possible and negotiating with the driver behind you if not.

How to manage the heat when wearing a helmet

Despite being ventilated, any cycle helmet will make your head hotter. Here’s what can you do to...