How to replace a broken spoke 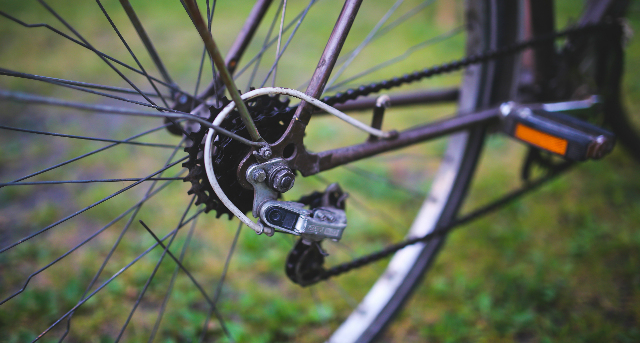 A snapped spoke means a buckled wheel that will wobble and maybe rub the brakes. Fitting a replacement is easier than you think.

Spokes can snap. Not often, and perhaps never if your bike has well-built wheels with enough spokes each to share the load. But even if you're not very heavy and your wheels have plenty of spokes each to share the load better, they can break. It's usually because the spoke hasn't been tensioned highly enough: the slightly loose spoke flexes more with each wheel rotation, which slowly fatigues the metal until it snaps – typically at the 'elbow bend' where it exits the hub.

Don't panic: you can fix this. You need to know how to true a wheel and a spoke key. If it doesn't work out, hand the wheel over to your bike shop; you'll be no worse off for trying.

You're unlikely to have a spare spoke with you if one snaps when you're riding to work, nor the time or spoke key required to fit it. Don't continue riding with a sheared spoke dangling from the rim; it could snag on the frame or in the drivetrain and jam.

If you can, unscrew the spoke from the nipple at the rim and stick it in your bag or a bin. If there's more than just the head of spoke at the hub, push that end of the broken spoke out through the hole in the hub flange. If you can't unscrew the spoke (no spoke key?), bend the trailing spoke around an adjacent spoke to keep it safe. Wear gloves for this, if you have them.

The wheel rim will be buckled, bending away from the side that has the broken spoke. If you have a spoke key with you, tighten the two nearest spokes on the same side of the wheel; they'll be adjacent to the broken spoke at the hub and next-but-one at the rim. Start with half a turn each and go from there. Turn the spoke key anticlockwise to tighten; it's a standard thread but you're turning from underneath. This should straighten the wheel enough to get home on it.

Spokes come in lots of different lengths and a range of diameters and shapes. A replacement must be at least the right length and it makes sense to match it other respects. Note that the spokes are not all the same length on your bike. If it has a derailleur, the rear wheel is dished to make room for the cassette of sprockets. The spokes are shorter and more steeply angled on that side. There may be other variations, depending on hubs used. However, all the spokes on any given side of each wheel will be the same.

You can measure a spoke with a ruler. Measure from the centre of the j-bend to the end in millimetres. With the spokes in the wheel and the threaded ends hidden, you can't do that. So take a spoke to the shop instead. If you have both ends of the broken spoke, take those. If not, remove another spoke from the from the same side of the wheel but 180 degrees from it around the rim. Take that to the bike shop and ask for one just like it.

Remove the wheel from the bike. If it has a disc brake rotor, you may need to remove that (usually via six T25 Torx bolts) to thread the new spoke through the hub flange. If it's on the drive side of the rear wheel, you'll need to remove the cassette (using a chain whip, a cassette removal tool, and a big spanner). 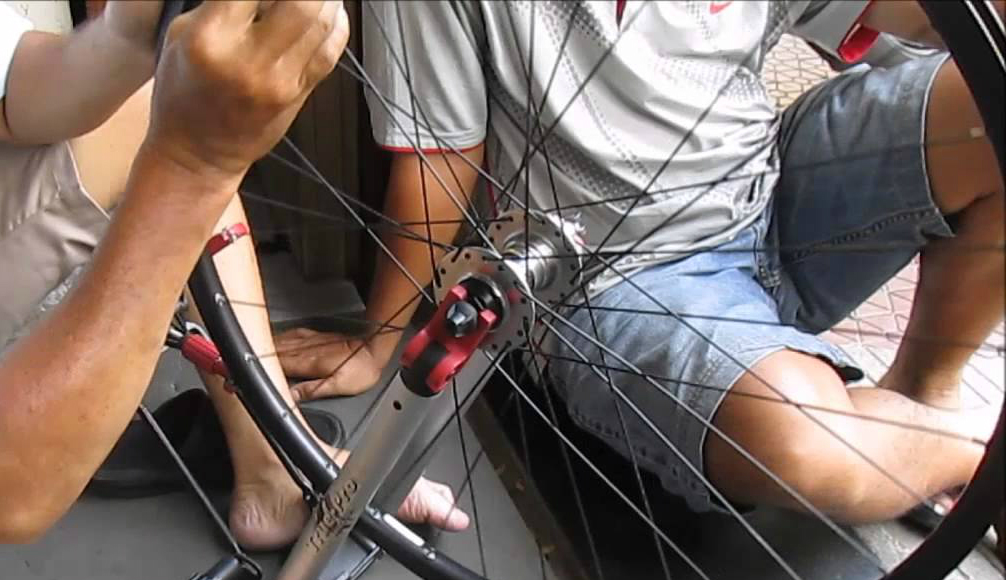 You can often re-use the nipple from the broken spoke, which should still be in the rim. If so, you can fit the new spoke with the tyre in place. If you're fitting a new nipple, which the shop will sell you along with the spoke, you'll need to remove tyre, innertube and rim tape.

Look at the wheel side on, with the missing spoke side nearest to you. At the hub flange, you'll the spokes arranged alternately: round spoke head, j-bend, spoke head etc. If the missing spoke would have its head showing, it's pushed through the hole in the flange from this side. If not, it's pushed through from the other side. Pull it through and point the threaded end towards the rim, so the spoke head butts up agains the hub flange.

Unless the wheel is radially spoked, with the spokes going directly from hub to rim, they will cross over and under each other. There's a pattern. Usually,  every other spoke on each side of the hub (and every fourth spoke at the rim) is the same. Copy this orientation and spoke-crossing pattern as you weave your new spoke over and under towards the nipple. Spokes are flexible and the new one will straighten as you true the wheel.

Put a dab of grease on the threads of the new spoke. If you're fitting a new nipple, put that through the hole in the rim. Insert the threaded end of the spoke into the nipple and tighten the nipple onto the spoke. If you've removed the tyre, tube and rim tape, you can screw the spoke head down with a screwdriver initially (clockwise when screwing from the top). Otherwise use your spoke key.

Tighten the nipple until you feel resistance from the spoke key. If you're fitting more than one spoke, fit them all like this first. Then refer to our article on truing a wheel, truing one wobble at a time and starting with the worst. Focus on tightening the new spoke(s) sufficiently before starting (if it's required) to back off any other spokes.

How to cycle and lose weight

Packing a few extra pounds recently? Cycle commuting is an ideal way to lose that weight and...