Could you ride up a Category 1 climb? How about a 33% hill? To understand the designations and get tips for tackling them, read on.

The helicopter shots of Tour de France cyclists speeding up the sinuous climbs of the Alps and Pyrenees each July underscore how fit the word’s best cyclists are. Just look at what they’re racing up!

The best climber of Le Tour gets to wear the polkadot jersey. Riders earn points in this competition by being first up the climbs, with the number of points depending on each climb’s difficulty. There are five ranks for them: categories one through four, plus an extra hors categorie (‘beyond categorisation’) class.

Category four climbs are the ‘easiest’ and will usually be over 4km long, with an average gradient above 4%. Hors categorie climbs are the hardest and are typically 15km or longer and 8% or steeper on average. It’s not just a matter of gradient and length, however: a climb at the end of a stage will feel harder and likely be ridden faster, so may be given a higher ranking by the organisers.

You might be thinking: those climbs don’t seem so steep. There are plenty of road signs in the UK showing climbs of 20% or 25% and a few 33% ones. Are UK climbs like Rosedale Chimney Bank and Hardknott Pass (both 33%) really tougher than Tour de France classics like the Tourmalet and Alpe D’Huez?

Yes and no. Climbs in the UK are generally steeper (thus harder) but shorter (therefore easier). They’re not actually as steep as our road signs imply. Those triangular signs list the nominal maximum gradient of the climb. So while Rosedale Chimney Bank is signed as 33%, its average gradient from bottom to top is about 13%. That’s still steep – steeper, in fact, that a Tour de France hors categorie climb!

Continental climbs tack back and forth with snaking hairpins to ease the gradient. They’ve been engineered for gradual ascents. There’s a theory that this is because these mountain passes had to be crossed by armies dragging cannon behind them. As Napoleonic-era armies never marched over Britain, there wasn’t the same imperative to grade our roads. We just put tarmac on top of cart tracks and donkey tracks, which followed more direct routes over the hills. Whatever the truth of the theory, Continental pro cyclists are often surprised at how steep some UK climbs are.

Hard they may be, but the UK’s tough climbs are mere pimples in classification terms due to their lack of length and elevation. Take the Tour de Yorkshire, which was run by the same organisers as the Tour de France. When the race took in the tough ascent of Buttertubs in the Yorkshire Dales, it was listed as a mere Category 1 climb.

You’ll find similar underwhelming rankings of our climbs on Strava, the ride logging website. Like cycle race organisers, Strava categorises climbs based on the length and the gradient but without any subjective nudging from race officials. The climb’s length in metres is simply multiplied by the gradient in percentage terms, yielding a number in the thousands. If it’s 8,000 or more, Strava lists it as a Cat 4 climb. Over 16,000 and it’s Cat 3. Over 32,000 is Cat 2. Over 64,000 is Cat 4. Hors categorie (HC) is over 80,000. So the fearsome Rosedale Chimney Bank, which is about 1.3km long and has a 13% gradient, scrapes in as a Cat 3 climb (16,900).

How to tackle hills

Short, sharp rises that you can get to the top of in a few tens of seconds can be charged. (If you want to – spinning up is also fine!) Stay in the gear you’re in, accelerate towards the climb, stand up on the pedals as you hit the rise, and power you way to the top. Don’t try this on a ‘proper’ climb that will take more than a minute to complete. You’re likely to run out of momentum and power. Save your energy on genuine climbs so you can dig deeper later.

The easiest way to cycle up climbs is to use an easier gear, one that you can spin at something closer to your normal riding-along cadence. This is only possible if your bike’s gears go low enough. Many bikes, particularly road bikes, are too highly geared for typical riders on steeper UK climbs. Visit Hardknott Pass when the Fred Whitton Challenge ride goes up it and you’ll see plenty of sportive cyclists pushing their bikes, click-clacking up the road on their cleats. Turns out a 34/28 gear isn’t always low enough… 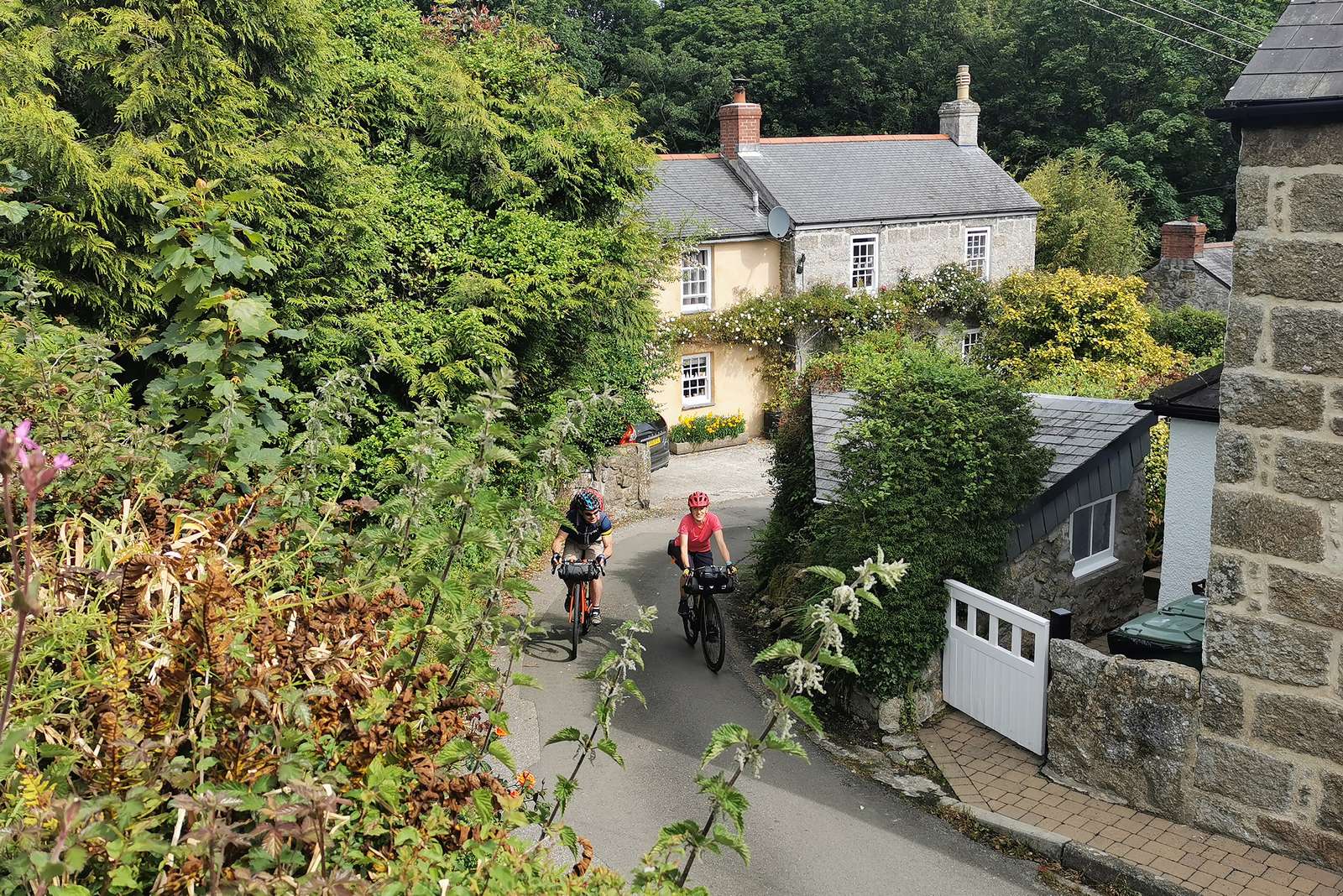 Don’t feel that you have to buy into the macho idea that says you must get fitter. Change your bike instead. Use whatever gears YOU need for the climbs YOU will be riding. If that means having a 20/40 bottom gear (about 14in) so you can cruise comfortably up hills like Hardknott, so be it. Would you rather ride up steep hill at 3-4mph or walk up at 2mph?

Shift to an easier gear just before you really need it on a climb, not afterwards. That means changing gear before your cadence drops too low. Derailleurs, especially front derailleurs, are designed to shift gear when you’re pedalling smoothly, not when you’re stamping on the pedals with all your strength. If you try to shift gear when the chain is under maximum tension it may fail to disengage from the chainring or sprocket and stay where it is. Or the chain may snap. You need to be able to back off the pedal pressure a little to shift gear cleanly. You can only do that if your still turning the pedals fairly easily.

Don’t stand up too much on long climbs. While you can put more power through the pedals this way, it takes more energy so you’ll get tired more quickly. Sit down where you can and just stand for the really steep sections if you have to. Sitting down also gives better traction on the rear wheel, which is important if the road is damp or gravelly, or if you’re riding off-road. When the road or trail is really steep, shift forward on your saddle to keep more weight on the front wheel. This should stop it lifting up.

For most cyclists the best type of bike for climbing steep hills is one with lower gears that’s also easy to balance, so you can keep pedalling comfortably at really low speeds. Mountain bikes, touring bikes, and hybrids can thus be better for tackling steeper hills than road bikes – although you may want to change the tyres or remove any accessories that aren’t needed for the hilly ride you have in mind. Using a lighter bike does help but not by as much as you’d think. You can see the differences by putting various gradients and weights into Bike Calculator. If your bike has suspension, lock it out (if you can) or pedal smoothly while sitting down if you can’t, otherwise the bike’s bobbing will waste some of your pedalling energy.

The easiest option of all, of course, is an e-bike. Put it in turbo mode and relax! The e-bikes that climb steep hills best are those with high-torque mid-motors. Any mid-motor benefits from the variable gears at the rear wheel. Just as your legs spin more easily when you shift into bottom gear for a hill, so does a mid-motor. It’s more efficient. Mid-motors are also available with higher torque outputs – and torque is what you want for steep hills. Instead of the 30-40Nm torque motors that many e-bikes use, a Bosch Performance Line CX motor (which you’ll find on e-mountain bikes) offers 85Nm torque. Having said that, any e-bike motor will make a massive difference compared to no motor at all. 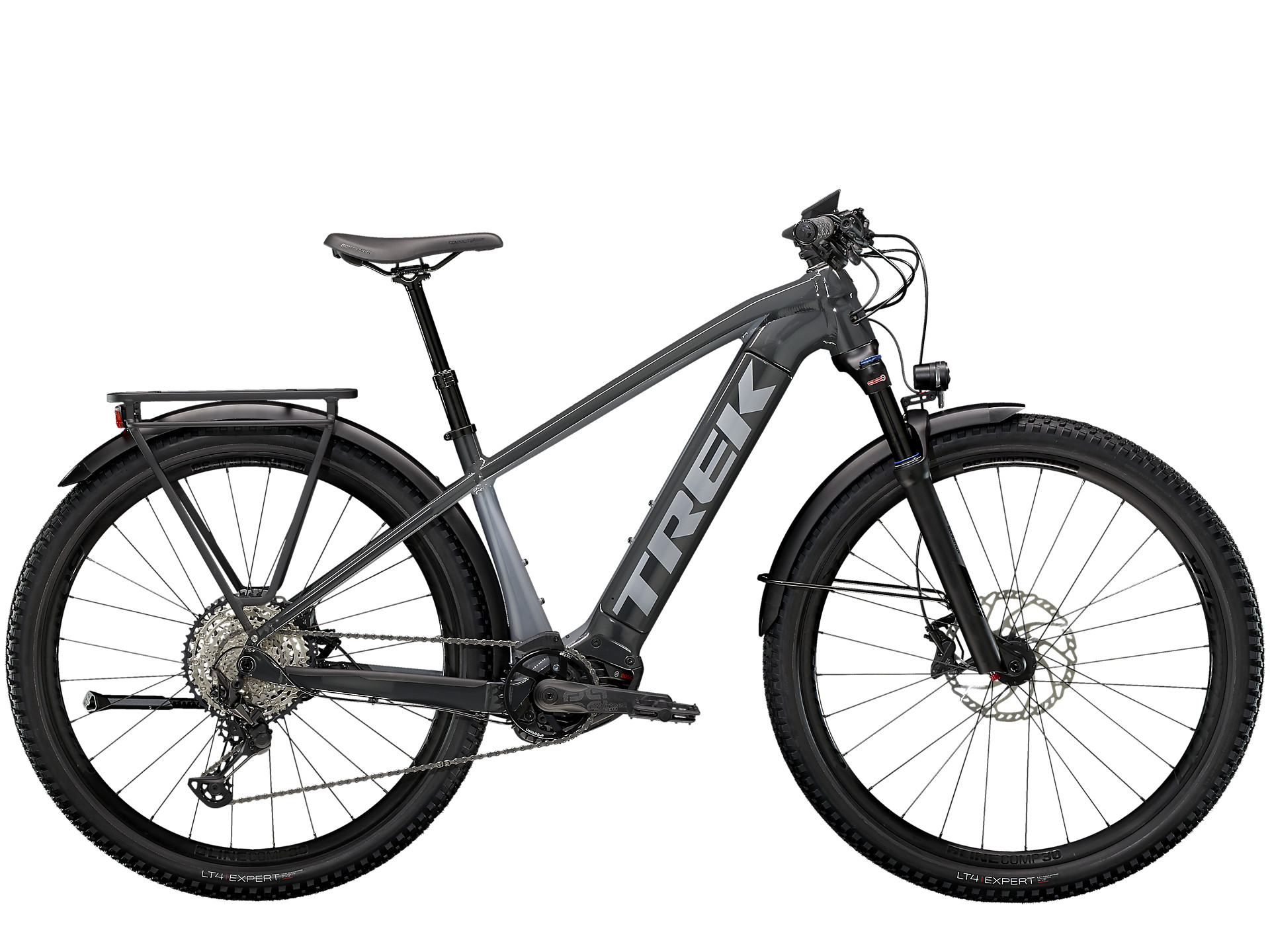 Where to find them

Particularly good places for steep hills in England include Cornwall, the Lake District, the Peak District, and the North York Moors. In Wales, Snowdonia has some cracking climbs but there others peppered all over the country. In Scotland, almost anywhere north of the Central Belt is lumpy; the climbs in the north west, such as Bealach na Ba on the Applecross Peninsula, are outstanding. Northern Ireland has the Mourne Mountains and the Sperrins.

If you want to seek out – and perhaps tick off – steep cycling climbs around the UK, have a look at the Greatest Cycling Climbs books by Simon Warren.