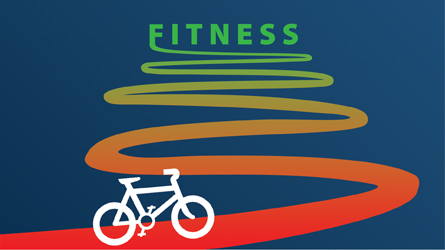 10 reasons why getting on your bike will keep you healthy.

Regular moderate exercise such as cycling to and from work enhances your body’s immune system, making you less susceptible to colds and other viruses. Even if you do get infected, you’re likely to have fewer symptoms than your less active workmates.

Exercise can encourage your production of infection-fighting white blood cells and bolster your antibody response, and important immune cells circulate around your body more quickly for up to three hours after exercise to deal with bacteria and viruses.

Professor David Nieman of Appalachian State University, USA says, “A high frequency of physical activity is needed to repeat the exercise-induced immune cell surges that over time add up to improved virus control and reduced illness.”

So commuting by bike will keep the sniffles at bay.

2. Cycling is a stress buster

Loads of evidence suggests that people who take part in exercise like cycling suffer lower levels of stress, anxiety and depression than sedentary folk.

Many reasons have been put forward to explain this, from the simple – that physical activity provides a diversion from everyday worries  – to the complex – that exercise induces biochemical changes that improve your mood. And lots of people report that they find the regular cyclic movement of pedalling more relaxing than other forms of exercise.

Whatever the causes, getting on your bike regularly is certainly a good investment in your mental well-being.

If you want to get slimmer or just make sure you don’t pile the pounds on, regular cycling is the perfect choice of exercise.

The bike bears your weight so there’s no impact going through your joints, and unlike many other forms of exercise, you can cycle for prolonged periods of time to put your body into considerable calorie deficit – when your body uses up more energy than you’re taking in, encouraging the use of your fat stores as fuel.

It’ll depend on your weight and your exercise intensity, but it’s not unusual to burn up 400 calories an hour or more on the bike.

4. Cycling can help you avoid diabetes

Long bike rides, as high-volume aerobic exercise, are a good way to help avoid diabetes. But a study led by Professor James Timmons of Heriot-Watt University in Edinburgh has found that short, high-intensity exercise substantially improves the body’s ability to process sugars and fight the disease.

The test group simply performed 4-6 cycle sprints of 30secs each, in six sessions over a fortnight – a total of just 7:30mins of hard exercise a week.

That should be easy enough to incorporate into your commute.

5. Cycling will protect your joints

People sometimes worry that repetitive exercise like cycling will wear out their joints, but a moderate amount of cycling actually increases flexibility and reduces the risk of disability caused by arthritis.

Most joint injuries from cycling occur when people do too much too soon, rather than building up gradually – a simple rule is to increase the amount you ride by no more than 10% a week to avoid trouble.

In cycling, most of your weight is taken by the saddle so you don’t pound your body like you do if you run. Cycling is an excellent way to get a cardiovascular workout without stressing your joints.

6. Cycling will improve your muscles

If you’ve ever seen Tour de France riders on TV you’ll know that cycling can give you an impressive pair of legs, but you don’t need to ride as much as the professionals to enjoy the benefits to your own muscles.

If we don’t exercise, we all lose muscle as we age – often from our mid-30s onwards. This results in reduced function and an increased risk of injury in everyday life.

Cycling helps us to maintain our muscle mass. And although it mostly works our quads, butt and calf muscles, you’ll also feel the benefit in your abs and back muscles, and in your shoulders and arms too. And don’t worry that cycling will give you huge legs – it won’t; you’ll just end up toned.

There’s a growing body of evidence showing that regular physical activity reduces the possibility of some cancers.

Research has shown, for example, that physical activity reduces the risk of colon cancer by about 50 percent. Experts think it’s because exercise speeds up the movement of material through the digestive system and colon, giving less time for cancerous agents to become malignant.

And we’re not talking about loads of high-intensity exercise here; the American Cancer Society suggest that 30 minutes of exercise a day, five days a week, will reduce your cancer risk. It makes a lot of sense to do it on the bike as you commute to and from work.

Heart disease is now the biggest killer in the UK, but many studies have shown that bringing cardiovascular exercise like cycling into your life will lower the chance of you having a heart attack or stroke, and reduce the possibility that you’ll need anything like bypass surgery.

According to the British Heart Foundation, if you cycle at least 20 miles a week you are half as likely to have heart problems as those who don’t exercise at all. Riding just two miles to work every morning, and two miles home every evening would cover it. That has to be worth the effort.

9. Cycling will improve your cardiovascular fitness

Cycling won’t just protect you against heart disease, your whole cardiovascular system will become stronger and more developed meaning that your body will be able to take oxygen and nutrients to your muscles more efficiently.

This isn’t just useful for sport, it’s vital in everyday life too. Normal tasks like walking up a couple of flights of stairs or carrying heavy shopping will feel easier after a few weeks commuting by bike.

10. Cycling will improve your cholesterol levels

The amount you need to exercise to improve your cholesterol levels has been debated lots, but most health organisations recommend a minimum of 30mins on most, preferably all, days of the week at a moderate to vigorous intensity. You can do that as 15mins on the way to work, and 15mins on the way home again. There’s some evidence to suggest that intense exercise has a bigger impact than taking it easy.

How well do you know the Highway Code?

The Highway Code contains vital information, advice, and road traffic law. Yet most of us...