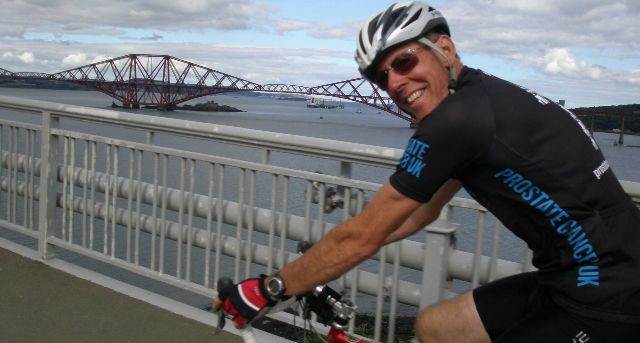 Ever wondered how your commuting experience differs to others? Each month we share the story of a real Cyclescheme cycle commuter and ask them seven questions to sum up their experience from their two-wheeled commute. This month, it's Dermot.

This month we caught up with Dermot to see how his commute has changed his life.

CS: Where in the UK are you?
Southern Hampshire

CS: What was your main motivation for getting a bike through Cyclescheme?
To give it a go!  I had been persuaded to take part in the British Heart Foundation’s London to Brighton ride some years ago and have ridden it every year since on my aging hybrid.  This kindled an ambition to do a longer London to Paris charity Ride for which an updated bike was in order.  Had a feeling that commuting would either put me off or make me fit enough to make it.  In the end I never got to Paris, but the trip to Brussels was fair compensation.

CS: What bike did you get and why?
A Genesis Equilibrium - a road bike. Red steel frame, white tape, saddle and trimmings, whatever, but it does it for me!  Durable, comfortable, with enough fixings for the necessary mudguards and rack plus she’s fast enough for me.  We’ve commuted together, toured with and without a load, ridden in Belgium and France, gone coast to coast, and end to end, mostly on roads but sometimes off.  I’ve changed lights and mudguards, worn out brakes, tubes, tires, chains, gears, cables, bottom brackets and wheels – but obviously still the same bike…

CS: How much did you spend with your Cyclescheme Certificate?
£1000 on the bike.  And then spent more on accessories. And then added peddles.  And shoes.  And with time have added cycle clothing.

CS: How often do you commute to work by bike?
My original commute was fifteen-miles. Then my office moved and the trip is now around thirty miles each way.  I try for once a week, it’s more often in the summer and less in the winter. I don’t take account of the weather (ride in days have to be fixed in advance due to time constraints or need for other visits) but have to accept that some trips just take longer than others. I vary the route to try for shortest on the way in and most pleasant on the way home – so a round trip is usually just over the 100K.  We’re lucky where I work to have a decent shower and safe bike shed.

CS: Where do you commute from and to?
Home to Andover, all but a mile on roads.  Mostly unlit country lanes but with short sections of main road to link up a reasonable route.

CS: How has cycling affected your daily life - do you feel healthier? Have you saved money?
How has cycling affected my daily life? I now eat more!! And I’ve got fitter and thinner. Cycle to work days become a logistics exercise in eating (yes!).  It’ nice to have that certain confidence that comes with knowing you can hop on your bike ride a hundred miles and still take the dog for a walk before the end of the day.  Have I saved money?  More of a redistribution that a saving – rather than pour money directly into a petrol tank it now gets spread around my local bike shops. But I am defiantly richer –in life experiences. Watch out, this cycling malarkey can become addictive.

Are you ready to start your story?