The Cyclescheme Seven: what's your commute really like? (Sam) 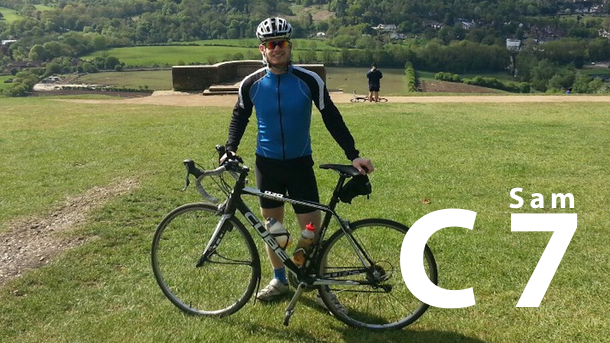 Ever wondered how your commuting experience differs to others? Each month we share the story of a real Cyclescheme cycle commuter and ask them seven questions to sum up their experience from their two-wheeled commute. This month, it's Sam.

This month we caught up with Sam to see how his commute has changed his life.

Sam: I’m currently based in Borehamwood, Hertfordshire just outside of London.

Sam: I found a new role in London and moved from Medway in Kent to Bromley. I wanted to start cycling rather than be on the train everyday and found out through HR we had this scheme available, with the reduced tax and monthly interest free instalments you can’t pass it up. I have convinced 4 other colleagues to sign up since!

Sam: After completing a lot of research I opted for a Cube Peloton, it has a great spec and as a full road bike it is perfect for a London commute and also for training at the weekend. Although I would like discs on my next purchase for the winter months.

Sam: I commute 5 days per week whatever the weather; who can stand being on a rush hour train!?

Sam: I commute from Borehamwood in Hertfordshire to Holborn in central London which is a 30 mile round trip and includes 2000 feet of climbing.

Sam: On a daily basis I feel fresher getting to my desk each morning, I can eat all the cakes for people's birthdays and not get fat which annoys lots of train dwellers. Also I race MTB’s at the weekend so the training from the commute is second to none, plus its very time efficient. The saving compared to the train is huge in both monetary terms and health benefits.