The Cyclescheme Seven: what's your commute really like? (James D) 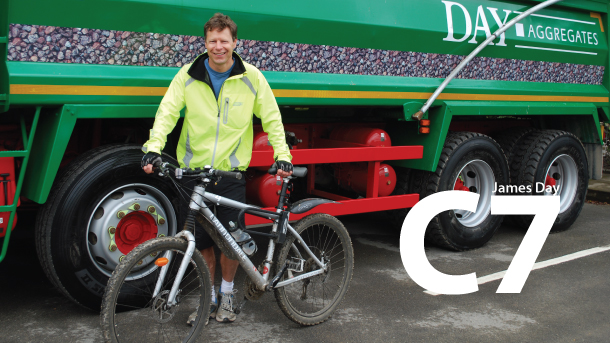 Ever wondered how your commuting experience differs to others? Each month we share the story of a real Cyclescheme cycle commuter and ask them seven questions to sum up their experience from their two-wheeled commute. This month, it's James from Surrey.

This month we caught up with James Day (Managing Director of Day Aggregates) to talk not just about his commute to work, but also his unique insight into the hot topic of the moment - cyclists and lorries.

James: My Hercules Balmoral (purchased second hand for £18 twenty years ago) was rather long in the tooth to say the least. I’d been meaning to update it and also to start cycling to work for some time and the scheme gave me a good excuse to get on with both.

James: I chose a Cannondale F4. I wanted a decent bike with disc brakes and opted for a mountain bike as I like the ‘go anywhere’ ability. I cycle along the banks of the Thames and in Richmond Park, although to be honest the cycle paths in the latter are of a higher standard than many of the roads in London!

James: With a good lock and the all-important safety gear I spent just under the maximum of £1,000.

James: My job involves visiting my company’s various operations around the south east which makes cycling impractical many days, but I’m usually at the office all day a couple of times a week so, unless it’s icy, that’s when I cycle.

James: I live in Richmond, Surrey and work in Brentford, Middlesex; a commute of only about 5 miles

James: I’ve saved money and undoubtedly feel healthier for cycling, getting both a bit of exercise and plenty of our splendid British weather.

Having to use some busy roads, including sections of the South Circular, it also overlaps neatly with my job. I’m Managing Director of a business that runs 115 Large Goods Vehicles which mainly move recycled materials and quarry products. Safety is of tremendous importance to us and we’re trying, as a company and through considerable involvement with our trade body, the Mineral Products Association, to ensure that our vehicles are equipped and our drivers trained to a consistently high standard.

We’re constantly reviewing safety equipment and driver training – particularly with regard to vulnerable road users - as you might imagine. But along with many other operators in the industry and in conjunction with Transport for London and the Metropolitan Police to name but two, we’re also doing what we can to help cyclists appreciate the challenges of sharing road space in a city such as London and what they can do to help stop accidents.