Round Up: Flat-bar road bikes 3 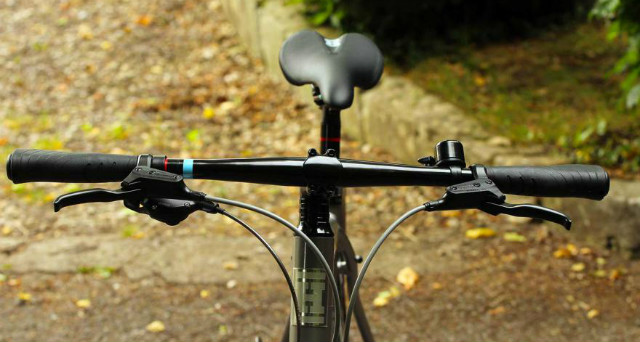 Road bikes are the kings of speed for commuting, thanks to their low weight, fast-rolling tyres, and aerodynamic riding position. The drop handlebar that provides a road bike's wind-cheating profile is a two-edged sword in traffic, however. It encourages a head-down position that can compromise awareness, as well as lower-back comfort, and drop bar brake and gear levers aren't quite as user-friendly. Hence the flat-bar-equipped fitness bike, which trades some of a road bike's speed for control, comfort, and accessibility. It's become the default hybrid in English-speaking countries.

A fitness bike has other features that makes it more suitable for commuting than most road bikes. The frame is longer, even though the riding position is more upright. (How? With a flat bar, your hands don't rest several centimetres in front of and/or below the end of the stem as they do on a drop bar.) A longer frame means you're unlikely to suffer toe overlap, especially in small frame sizes. Toe overlap is where your foot can hit the tyre or mudguard on slow-speed, tight turns. It's seldom an issue when riding in the lanes but can be a real hindrance in stop-start urban traffic. As well as having more space for mudguards, fitness bikes almost always have eyelets to attach them – as well as a pannier rack.

Like road bikes costing up to £1,000, most fitness bikes have an aluminium frame because this material is lightweight and not expensive. Unlike road bikes, the fork might be aluminium too; fitness bikes typically have wider, more shock-absorbing tyres than road bikes, so an unyielding fork isn't the issue it would be on a road bike with 25mm tyres. Other fitness bikes use forks with steel or carbon fibre legs, and these are worth looking out for if you will use narrower (28mm or less) tyres.

On road bikes, discs are challenging sidepull calliper brakes for dominance.  On fitness bikes, sidepull callipers have pretty much disappeared; you'll get V-brakes or discs. This is good news for commuters because it allows bigger clearances around the tyre. With sidepull callipers, if you want mudguards you're restricted to 25mm or 28mm tyres at best; with V-brakes or discs, there's usually room for 32mm or more, sometimes much more. So you can ride poorly-repaired urban roads without suffering pinch punctures or rattling your teeth in their sockets.

Whereas the discs on road bikes tend to be cable-operated  – integrated hydraulic brake/gear levers being very expensive – fitness bikes have hydraulic discs at modest price points. Flat bar brake levers are separate from the gear shifters, and they've been around on mountain bikes for years so have trickled down in price. Hydraulic brakes require less maintenance than cable ones, rub less because both pistons move, and they don't require as much grip strength for powerful braking.

Gearing on fitness bikes tends to be the flat-bar version of road bike groupsets: Shimano Claris (8-speed), Sora (9-speed) or Tiagra (10-speed). So you get the same derailleurs, chainrings, and cassette as a road bike but with mountain-bike-style thumbshift levers. Such gears – a 50-34 chainset and an 11-32 cassette, for example – are suited to going fairly quickly on tarmac. If you'll be riding in hillier terrain or carrying panniers, look for lower gears: some fitness bikes have a smaller-sized double chainset and some have a triple with a smaller inner ring. Manufacturers could fit a wider-range rear cassette (e.g. 11-36 or more) by specifying a mountain bike rear derailleur and matching shifter, but they seldom do so.

This being the case, fitness bikes are easier and more fun to ride when they're relatively unencumbered – which is how they're sold. You'll want to add mudguards but may prefer a courier bag or backpack over panniers.

The entry-level model in the Thrive range is the only one with an aluminium fork; the others use carbon. While an aluminium fork might be a little harsh with a 28mm tyre, Giant provide bar-ends on all their fitness bikes, and the alternative grip prevents hand discomfort. Gearing is 8-speed Shimano Claris with a triple chainset, which will be welcomed by returnee riders for its less strenuous 30/32 bottom gear. V-brakes give good stopping power and have ample clearance for full-length mudguards. The frame and fork have eyelets for these as well as pannier racks. The closest men's version is the Giant Rapid 3 (£575, with disc brakes). 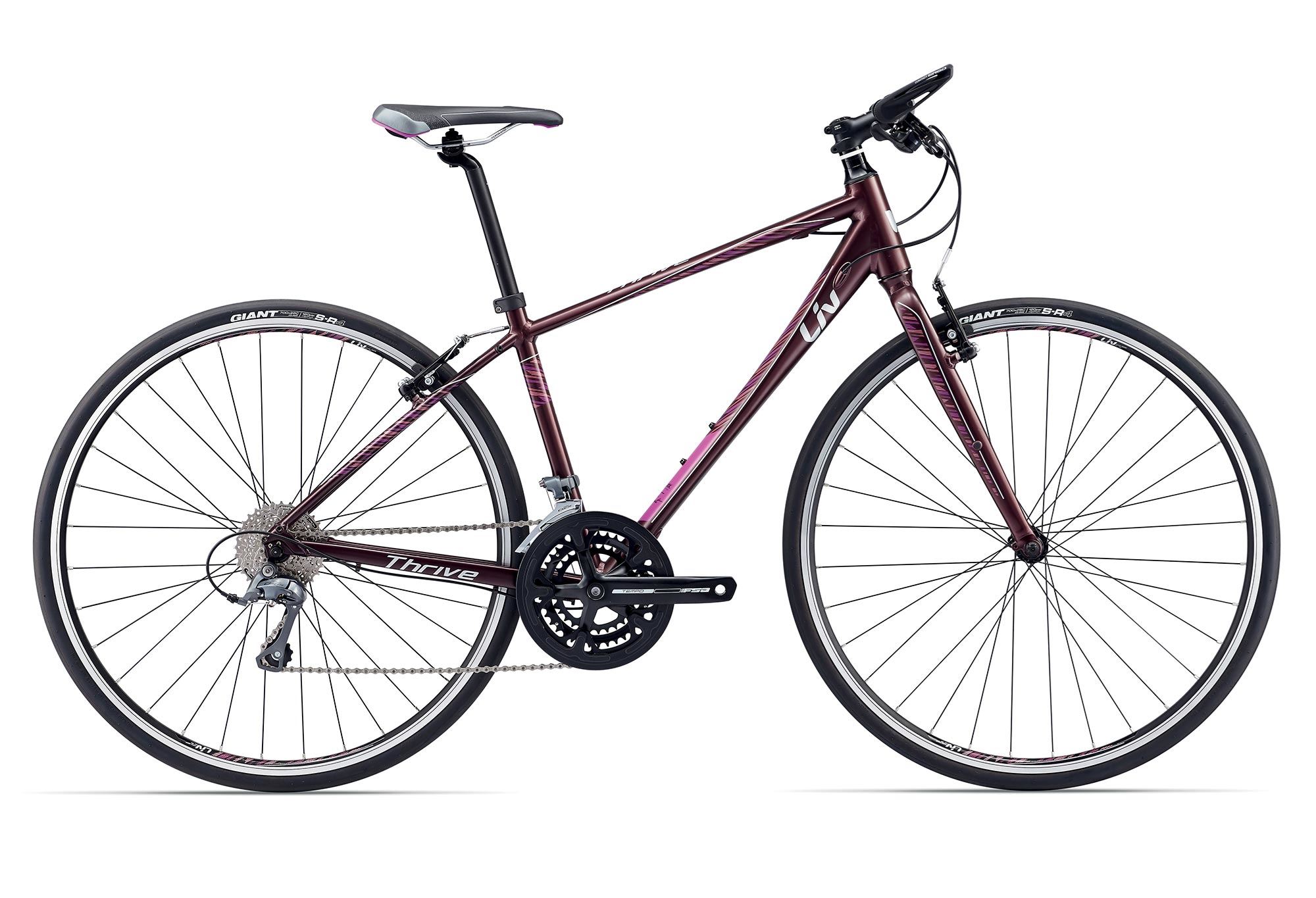 This Cube has an aluminium fork too, but as the tyres are 40mm wide they should filter out any vibration before it reaches your hands. They'll cope well with winter potholes too – or even unsurfaced tracks, as they have a little tread. Like the Liv Thrive 3, the gearing is 8-speed Shimano Claris but here the chainset is a 50-34 road double. Bottom gear is thus a bit higher: 34/32. As it's more expensive, the Cube has hydraulic discs instead of V-brakes, giving one-finger braking that won't slowly abrade the rims. Mudguards and racks can be fitted. It's also available with a step-through frame. 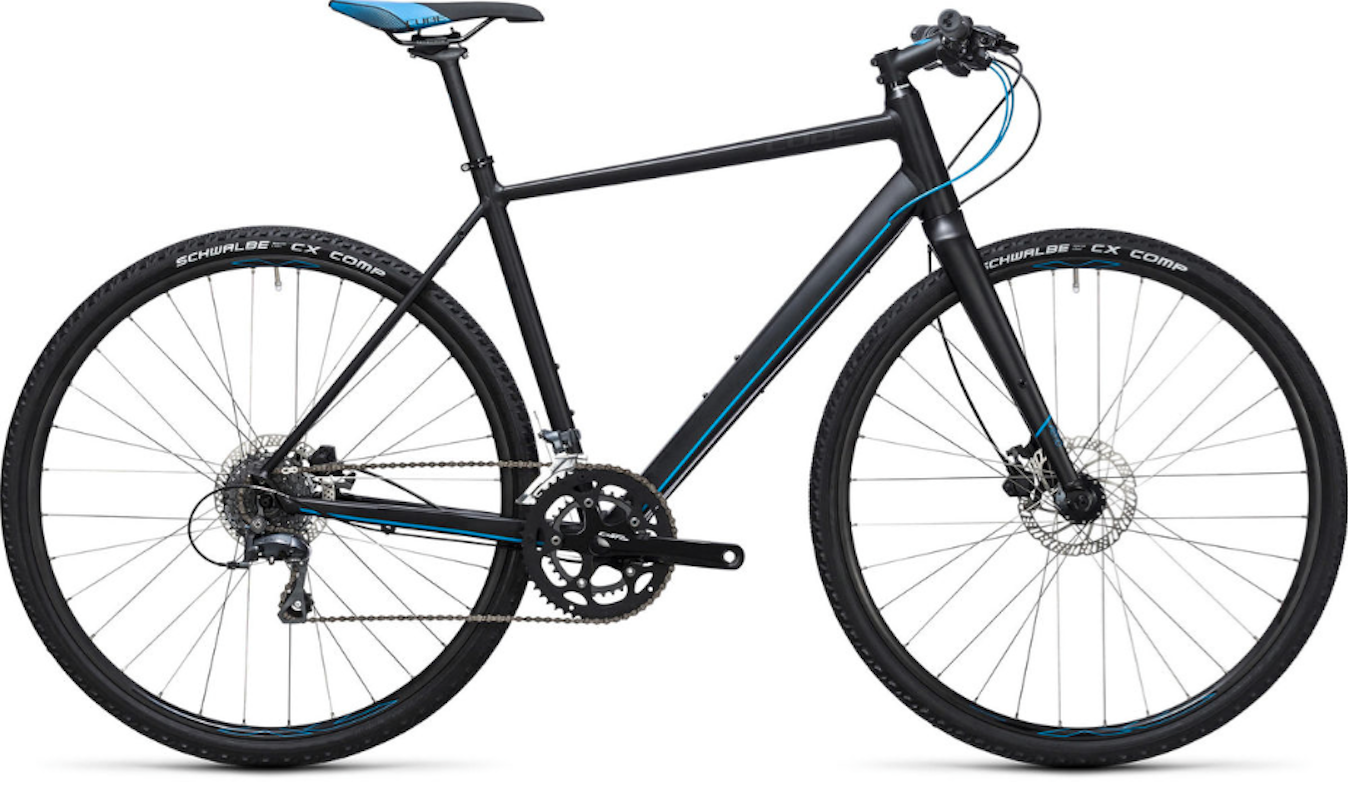 The fork on the Zektor 3 is visibly narrower because it's steel, adding weight but also resilience. There's no facility to fit a front rack, only a rear one and mudguards. That's no great loss on a fitness bike, even though the Zektor 3 is lower-geared than most. Its double chainset is a smaller 48-32, while the cassette is a wider-range 11-34. So bottom gear is about the same as on the triple-equipped Liv. It's 9-speed Shimano Sora equipment. The brakes are Shimano ones too: M315 hydraulic discs. The 32mm tyres are fairly tough already but if you want to upgrade to self-sealing tubeless tyres, the rims will accommodate them. There's a step-through version called the Zektor 3 Stagger. 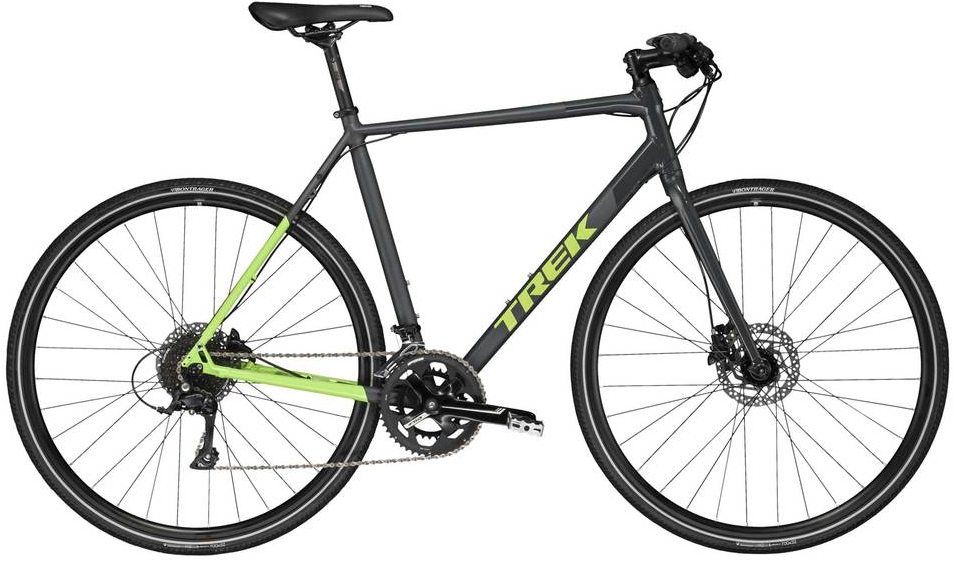