Round Up: Trekking Bikes 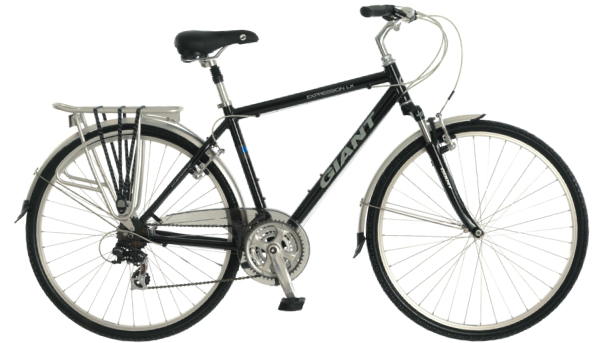 The trekking bike is the northern European equivalent of the British tourer, only with a flat handlebar and a more casual, less mile-eating focus. It's a tarmac-and-gentle-tracks hybrid, factory-fitted with the accessories you'll want for weekday commuting or weekend wandering.

The trekking bike is the northern European equivalent of the British tourer, only with a flat handlebar and a more casual, less mile-eating focus. It's a tarmac-and-gentle-tracks hybrid, factory-fitted with the accessories you'll want for weekday commuting or weekend wandering.

All trekking bikes come with full-length mudguards and a rear pannier rack. Many have a partial chainguard and a kickstand, while further up the price range you may get lights and/or an integral wheel-lock.

There are a couple of advantages in buying a fully-equipped hybrid as opposed to fitting the accessories yourself. One is cost: a bike manufacturer can buy parts cheaper than you can. The other is compatibility: you don't have to worry that this rack or those mudguards might not fit your bike properly.

Like touring bikes, trekking bikes usually have an excellent gear range, thanks to a triple chainset and a wide-ratio rear cassette. That makes them a good choice for hilly commutes, especially with loaded panniers, as you can gear down when the gradient goes up, spinning the cranks instead of straining.

Stopping is handled by V-brakes, also known as linear-pull brakes. Originally designed for mountain bikes, these are ample for city streets and country lanes. Some trekking bikes have disc brakes, generally cable operated rather than hydraulic unless they're quite expensive bikes.

Trekking bikes are commonly equipped with a basic, coil-shock suspension fork with a small amount (80mm or less) of travel. It's debatable whether you need this on road, given that the trekking bike's wider tyres (32-42mm) already do a good job of absorbing bumps. But a suspension fork can cut down on aches and pains in your hands from vibration, and it will help you stay in control if you hit an unseen pothole. Unfortunately the suspension won't only be active over bumps; it will bob up and down if you pedal standing up, which wastes energy. So unless your riding will be exclusively seated, look for a lockout lever so you can 'switch off' the suspension.

Some trekking bikes come with a suspension seatpost. These soften rear wheel bumps but, like suspension forks, add to the bike's weight. A sprung seatpost can make it harder to get on the saddle when starting off, since it won't depress to its normal height until you sit on it.

Even though it will have an aluminium frame, the overall weight of a trekking bike can seem quite high compared to other bike types, as the fitted accessories will be included. Any difference is moot once you add a pannier or two. Nevertheless, trekking bikes are cruisers rather than racers. If you want to sprint to work, you'll enjoy a flat-barroad bike more.

Trekking bikes are available at all price points, although high-end ones are uncommon in the UK. Here are four within the Cycle to Work threshold. 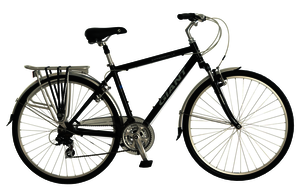 A bike for cycling at a relaxed pace, the Expression LX has an upright riding position thanks to its tall stem (a traditional quill design). That means less weight on your hands, less strain on your lower back and more bodyweight on your backside – not a problem, because the saddle is wide and it sits on a simple suspension seatpost. Matching this at the front end is a basic 50mm RST suspension fork. The aluminium frame is fitted with mudguards, chainguard and a rear rack. Gear range is good but not exceptional, as the largest sprocket on the 7-speed cassette is a 28, yielding a 1:1 bottom gear. The bike is also available with a step-through frame, as the Expression LX W.

The aluminium Sonoran has a rigid steel fork rather than a suspension fork, although it does have a suspension seatpost to soften unanticipated jolts through the saddle. Like the Giant, the stem is an old-fashioned quill design; here you can adjust the angle too, enabling you to put the handlebar just where you want it. Gearing is still entry-level Shimano kit, except it's 24-speed rather than 21. With a 32-tooth large sprocket, that means a wider overall range than the Giant as well as more steps in between. Trekking essentials are present in the form of chromoplastic mudguards and an aluminium rear rack. The 35mm Vittoria Randonneur tyres have a reasonable degree of puncture protection. It's available in Gent's and Ladies' versions. 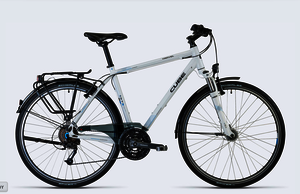 Cube bikes are designed in Germany, where the trekking bike is king. The Travel has everything you need for commuting, even lights: a Shimano hub dynamo powers excellent Busch und Müller LED lamps. The SKS mudguards are top drawer, and there's a chainstay-mounted kickstand as well as a rack. The aluminium frame looks neat as the cables are routed internally. The matching white Suntour NEX fork can be locked out when you don't need its 63mm travel. Gears are 27-speed Shimano Acera, with a great range thanks to a mountain bike 11-34 cassette and smaller middle and inner rings on the trekking chainset. The 40mm Schwalbe tyres are nice and comfortable for a city bike yet still roll well. Also available as the Travel Lady. 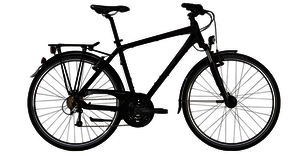 Ghost is another German brand. Like the Cube Travel, the Ghost TR 5100 has dynamo lighting driven by an efficient Shimano hub. A kickstand is added to the usual complement of mudguards, chainguard and rack. The fork is a good one for a trekking bike: a 60mm travel RST Neon PLS TnL, which has a lockout lever and hydraulic damping – so it won't simply spring back at you over bumps. The 27-speed drivetrain is a mix of Shimano Acera, Deore and XT, and offers the broad range you expect of a trekking bike. A wide handlebar provides a firm steering response, particularly when you've got a heavy load in rear panniers. You can tweak the handlebar position to suit thanks to an adjustable-angle stem. Also available as the TR5100 Lady.

Round Up: Love to Ride December update

Round Up: Cycling Jargon

If you’re just getting acquainted with the world of cycling, check out our cycling glossary.