How to commuterise your bike 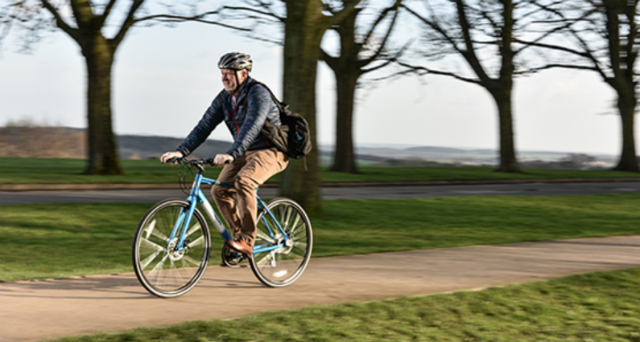 Any bike can be a capable commuter, but if it wasn’t designed with transport in mind you will need to make some modifications…

Bikes like roadsters and fully-equipped hybrids are ready-made for commuting, having mudguards to keep you clean, a luggage rack to take the load off your back, and tyres suitable for city streets. Some others, such as tourers, also tick the right boxes. Yet all these bikes are relatively rare in the UK compared to leisure-oriented road bikes and mountain bikes. Fortunately, you can add accessories (but not components) to your Cyclescheme package. And with the right choices, you can convert any bike to make it more suitable for the ride to work. We’ve focused on road and mountain bikes  but you can extrapolate from these suggestions for cyclocross bikes, flat-bar road bikes, and singlespeeds.

Mudguards: Many road bikes have the eyelets needed for frame-fitting mudguards like SKS Chromoplastics but not all of them have enough clearance for road grit to rattle through safely underneath. Look for a gap of around 15mm above the tyre before fitting the guard. The bike will likely have this if it has disc brakes or longer-reach sidepull callipers, such as: Shimano R450, R451 or R650; Tektro R317, R538, R539, or R737; and Miche Performance. If it doesn’t, usually because it has short-reach callipers, fit dedicated road bike mudguard such as SKS Race Blade Long or Crud Roadracers. These are designed for tighter clearances and don’t require eyelets either.

Luggage: If the frame has eyelets by the rear dropouts you can fit a pannier rack such as a Tortec Velocity. Use P-clips on the seat stays if the upper set of eyelets is missing. There are also racks that don’t require eyelets, such as the Bontrager BackRack Lightweight. Road bikes have short chain stays so use small panniers to avoid clipping your heels on the bags. So long as the bike has a metal seatpost and not a carbon one, you can use a seatpost rack like a Topeak MTX EX to carry a loaf-sized trunk bag instead. Or you could use a big saddlebag: a traditional British saddlebag, such as the Carradice Barley; or a modern bikepacking seatpack, such as the Apidura Saddle Pack Compact. 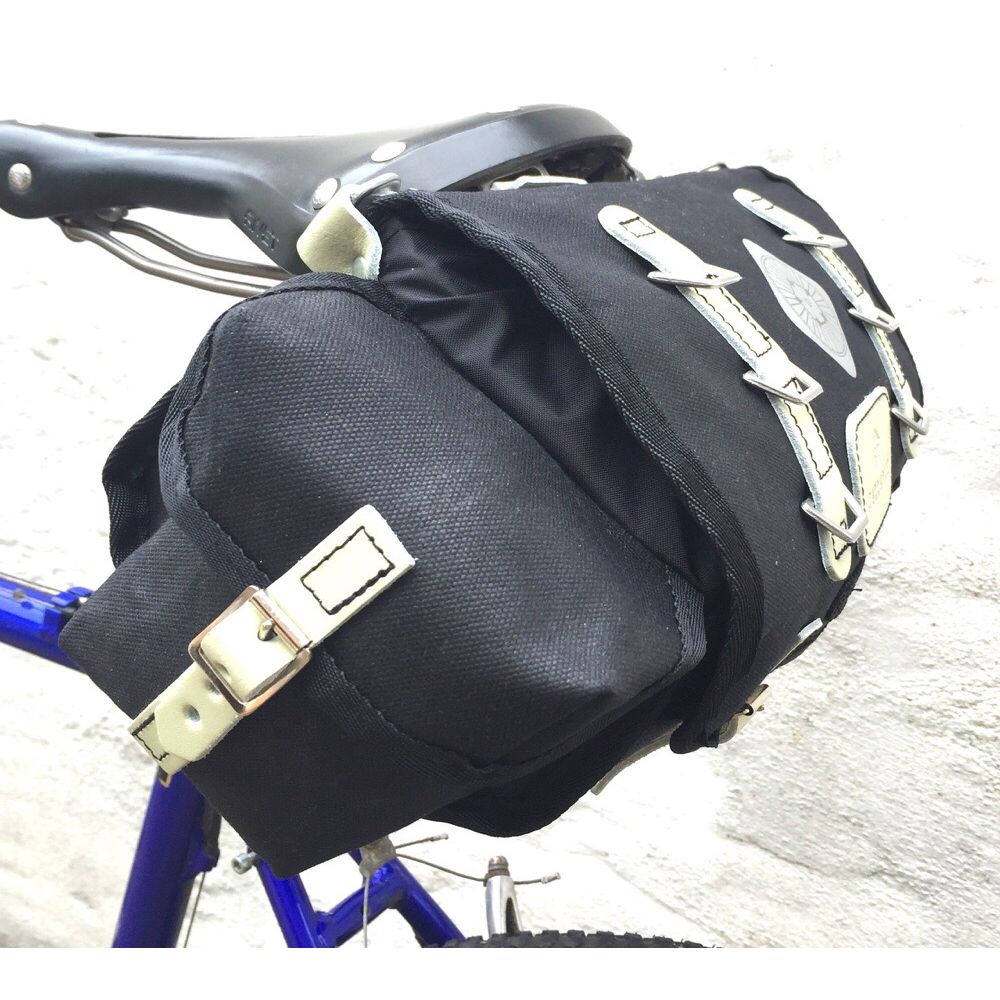 Tyres: Tougher tyres are a priority for commuting. That doesn’t have to mean a draggy, dead-feeling ride; tyres such as the Schwalbe Durano Plus and Continental Gatorskin combine puncture resistance with decent rolling performance. Fit the widest that will fit safely in the frame and under the mudguards – probably 25mm or 28mm.

Mudguards: It’s usually straightforward to attach a frame-fitting mudguard to the rear of a hardtail, using frame eyelets if present and P-clips if not. Fitting a front one to a suspension fork is trickier. You’ll probably need a pair of big P-clips for the fork stanchions. To attach the body of the mudguard to the fork brace, you’ll need cable ties and a bradawl. Bore two pairs of holes on the shoulders of the mudguard just fore and aft of the brace, then secure with cable ties, trimming off the excess. Dedicated mountain bike mudguards without stays are a better option for full-suspension bikes – or for any bike that will go off-road with guards. They attach at the rear to the seatpost or seat stays, and at the front to the fork crown or down tube; Crud are among the best known but there are lots to choose from. Mudhugger’s rear guard is great.

Luggage: A rear rack will fit to any hardtail with eyelets at the dropouts. If the bike has disc brakes, you’ll likely need a disc-compatible rack to prevent the rack (or the pannier on it) from fouling the disc brake calliper. If the bike doesn’t have eyelets at the rear dropouts, you’ll need a rack that attaches via the quick-release wheel skewer, such as the Axiom Streamliner Disc DLX. Carrying luggage on full-suspension frames works best if the load is suspended – which is to say, not attached down by the wheels. You can do that with: a beam rack that attaches to the seatpost; any large saddlebag or bikebacking seatpack (see above); other bikepacking bags; or a handlebar bag. Such luggage is easily removed for weekend off-road rides. 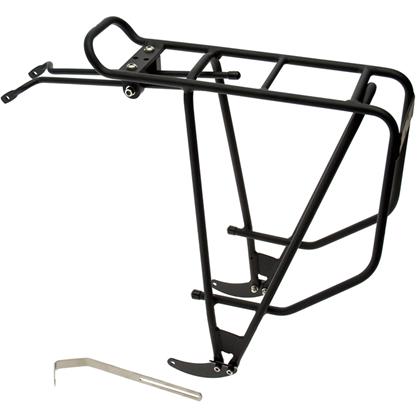 Tyres: Knobbly mountain bike tyres are draggy and slow on tarmac. Switching to slicks will massively improve efficiency. If you don’t need off-road grip, Schwalbe’s Big Apple is a good choice. If you want some tread, a wide touring tyre such as the Continental Top Contact II is a good compromise. 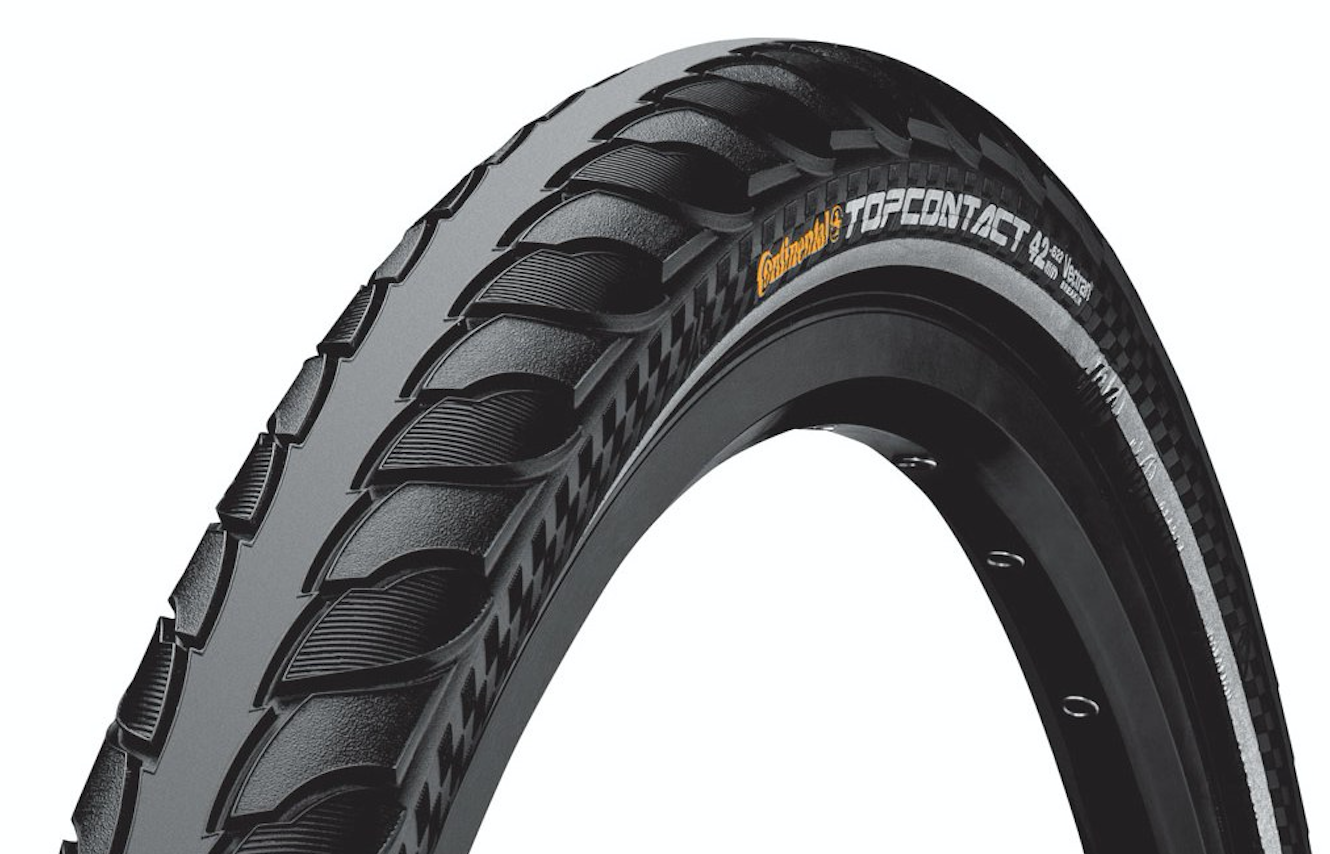