How to cycle safely with Lorries 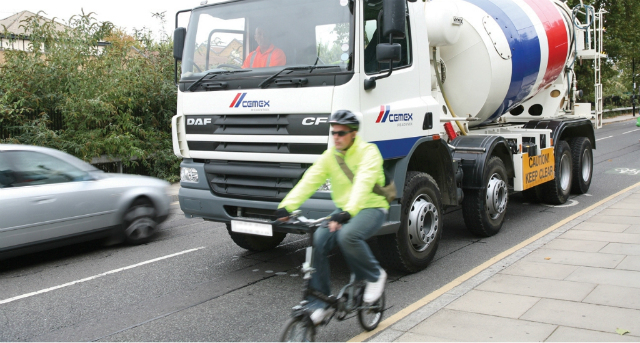 To share the road safely with trucks, it’s essential to understand their blindspots and turning dynamics – and to cycle accordingly.

Heavy goods vehicles are disproportionately dangerous to cyclists, particularly in London. While the drivers of articulated lorries are highly skilled, they can’t see cyclists easily, and in some situations, they can’t see cyclists at all. The sheer mass of the vehicles means that the consequences of any collisions are predictably grim. Skip lorries without sidebars are worse still, as there’s a higher risk of a cyclist going under the wheels.

Don’t take this bad news as a cue to stop cycling, though. The dangers of physical inactivity are many, many times greater, and the risks that lorries pose to you personally are small. While they could be reduced further by peak-hour bans, different cab designs, improved sensors and better urban planning, you can largely ensure your own safety by cycling appropriately.

Cyclists, You Need To Give Lorries Space

Never underestimate the amount of space that a long vehicle needs to turn. The outermost front tyre and innermost rear tyre follow very different paths. The front will go wide, swinging much further out than you would in a car or on a bike, while the rear will take a tighter line, cutting in across the apex of the bend. This is how cyclists on a lorry’s inside end up being hit when it turns left: the space they were in disappears.

When a lorry turns into a side road, the wide-swinging front end will often cross the side road’s central white line in order for the back end to make the turn. If this would put you in the lorry’s path, perhaps because you're turning right, be prepared to wait or move left. Never gamble on the driver having seen you.

Stay out of a lorry’s blind spots. They are much bigger than you think. If you can’t see the driver in one of the lorry’s mirrors, the chances are that the driver can’t see you. The biggest blind spot is on the inside (or kerbside), and on an articulated lorry this blind spot gets bigger as the lorry turns. Do not ride here. Do not attempt to pass a lorry on the inside, even if there's a sliver of cycle-stencilled tarmac tempting you to ride there. Pass on the right, the off-side, and go completely past – or wait behind.

There’s a surprisingly big blind spot in front of a lorry’s cab because the driver is so high up. Don’t wait right in front of a lorry’s grille. You need to be a few metres in front to be visible. It could be safer to wait behind than cycle up to the ASL (advanced stop line) at a junction. There’s a big blind spot directly behind a lorry too. Bear this in mind if you’re going to overtake, if the lorry is signalling, or the lorry might reverse.

Lorries Overtaking Cyclists - What To Do To Stay Safe

Lorries create a lot of air turbulence, especially when they’re travelling quickly. When one overtakes, there’s a powerful suction effect that will draw a cyclist towards the lorry – speeding you up and, if you’re not prepared for it, slewing you out into the road. Lorry drivers know this and generally give cyclists a good deal of room. Nevertheless, you need to be ready. Hold the handlebar firmly with both hands, keep pedalling and, if necessary, lean out – towards the kerb – against the drag. Be prepared to brake. You may need to do so to get the bike back under control, and if the driver miscalculates and swings back in too soon you’ll need to brake to stay well clear of the trailer (this can be more of a problem with caravans than lorries).

Can a cyclist ride in the middle of the road?

Assertive cycling (sometimes referred to as “taking the lane”) might sound like an odd proposition, given that we’re talking about cyclists sharing roads with 44-tonne lorries. Yet the more you act like traffic, the safer you will be around lorries. Good road positioning will help lorry drivers see you and react accordingly. Good communication will ensure that lorry drivers know what you’re doing and where you’re going.

Some road junctions are so badly designed that they are hazardous to cyclists, creating conflict with other road users in general and lorry drivers in particular. Bow roundabout in London, which has seen three cyclists’ deaths, is a case in point.

If a junction feels dangerous to you, despite your best efforts, do not use it. Pick a different route. Visit cyclestreets.net to plot your journey, selecting the Balanced or Quietest route options. If you absolutely cannot go around, dismount and negotiate the junction via the pavement instead.

Recently the London Cycling Campaign said that it is trying to raise £15,000 to help in campaigning to make some of London’s most dangerous junctions safer for cyclists. The plan includes proposals to help regulate the speeds of vehicles around these junctions and designing safer streets.