How to Overtake On a Bike 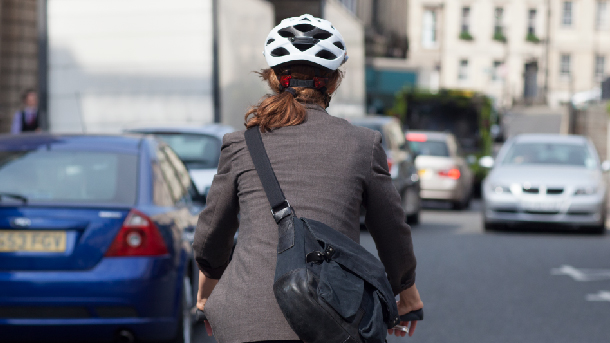 In many ways, it's easier to overtake while cycling than it is while driving.

No matter what you are overtaking when cycling you need to make sure that you do it safely - both for your own safety, and the safety of whoever you are passing.

In many ways, it's easier to overtake while cycling than it is while driving. It's clearer whether or not you can pass safely, you don't have to drop down a gear, and because you're moving slower you have more time to assess everything. Some things are harder, such as making other road users aware of you and understand what you're doing.

The Highway Code's mantra is a good one, as far as it goes. There's another consideration for cyclists: road position. Whenever you're planning to overtake, take the lane as you approach.

For one thing, it's then obvious to any following traffic that you're about to pass that parked car or slower cyclist. It's so obvious that you may not even need to signal with your arm. (You may need to signal in order to take the lane in the first place.) If you're planning to go further right – to overtake moving traffic – you will need to indicate manually too.

Taking the lane deters following drivers from attempting to overtake you while you are overtaking something else. It should also prevent you from getting boxed in by overtaking traffic. You have right of way over traffic that's behind you in your lane. So long as it's safe, take it!

Overtaking Parked Cars On Your Bike

Don't get doored! It is the driver's fault if he opens his door into your path, but this will be no consolation as you wait for the ambulance. Leave more than a car door's width between you and any stationary vehicle when overtaking parked cars on your bike. Be especially alert if the vehicle has just stopped, or if you can see people inside it.

When you're overtaking a succession of parked cars, it's usually better to hold your line. If there's lots of room between two cars, it's courteous to pull over to the left a bit so that traffic behind can pass. This can also stop idiots trying to undertake you. But don't feel obliged to box yourself in so that someone else can save a few seconds off their journey.

Some parked cars may start off and pull into the road just before you overtake – or during. You have right of way, even if the vehicle is signalling, but there's no guarantee that the driver will acknowledge this. If you can see exhaust fumes as you approach, be alert. If you see an indicator or the vehicle starting to move, make a judgment call: accelerate past or brake and drop in behind it.

Be aware that pedestrians may step out from behind parked vehicles, having listened rather than looked for traffic.

Overtaking and Filtering Through Traffic Queues When Cycling

It's perfectly legal to filter through traffic. But don't overtake moving traffic on the left, and never overtake long vehicles on the left. If the driver hasn't seen you, you could be crushed if it moves off and goes left. All vehicles have blind spots, particularly long vehicles. If you can't see the driver in one of the vehicle's mirrors, the driver can't see you.

It is also important that you are confident and have mastered the ability to look over your shoulder and behind yourself before attempting to filter through traffic. It can be dangerous in bigger cities and you don’t want to be veering into the road while doing so.

Overtaking a slow-moving motor vehicle, such as a tractor or a milk float, is straightforward. Take the lane. Observe, signal, manoeuvre. If you're planning to overtake a faster-moving motor vehicle that only happens to be going slow, be cautious: it might suddenly accelerate to a speed you can't match, or your momentum might fade as the gradient changes. Furthermore, the driver might not expect to be overtaken by a cyclist and may react inappropriately. Don't overtake just because you can; use common sense. If the vehicle is going to overtake you seconds after you've overtaken it, there's not much point passing it.

Take the lane as you approach so that you can give a slower cyclist plenty of room as you overtake. The other cyclist might not hear you and you don't want them to be surprised and wobble – into you or the kerb. Don't swing left too soon after you pass. If your back wheel clips their front wheel, you'll knock them off. Take the opportunity to say good morning as you pass: cyclists are nice people.

Overtaking Horse Riders On Your Bicycle

Horses are prey animals and startle easily, especially when quiet cyclists 'sneak up on them'. Pinging a bell doesn't really help. Instead, call out to the rider as you approach - 'cyclist behind!' or some such. When you're sure that the rider is aware of you, pass wide and slow. The horse might still be a bit jumpy even when the rider knows you're there.

The British Horse Society produced a leaflet in 2016 entitled Code of Conduct for Horse Riders and Cyclists. In the leaflet it states:

“Try not to get too close before you call out or you will startle both horse and rider. If possible, ask the horse rider if it is safe to pass before attempting to go by and call again if they haven’t heard you.”

Passing Pedestrians On Your Bike

Alerting pedestrians is even more important on shared-use, traffic-free paths. Slow down and either ping your bell or hail them. This isn't for the sake of politeness; it's a matter of safety. Pedestrians can change direction without warning. If you crash, you will both get hurt - and it will be your fault. On shared-use paths, cyclists are obliged to give way to pedestrians and horse riders. Even if there's a dividing line, with one side just for cyclists, you cannot count on pedestrians staying in their lane. Don't bully them like an angry driver. Just say 'excuse me!' and thank them when they step aside.

For a long time cyclists were taught to call out “on your left” or “passing on your left” but this is often not understood by the pedestrian and they could step out right into where you were trying to pass them.

Take special care when riding between a dog and its owner. Dogs often trot back to their owner when their name is called, irrespective of what you're doing. Or the dog might be on a long lead that you haven't seen…