How to approach and pass through traffic lights on a bike 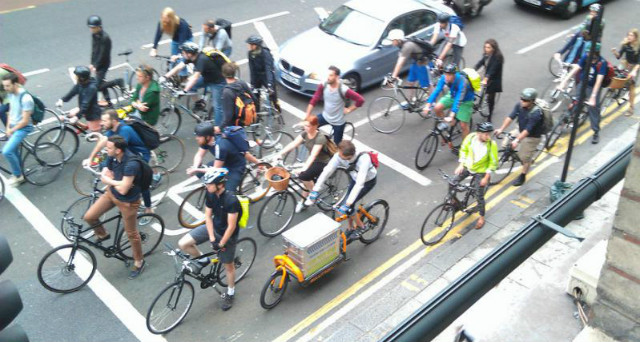 Stop at red, go on green: traffic lights are simple, aren't they? For cycle commuters, there's a few other things to consider.

Cyclists need to take extra care at traffic lights. For some road users, a red light is like a red rag: an excuse to get angry (or careless) and break the rules. Yet it's not bad luck or someone else's fault that the light wasn't green. It's maths. Most lights will be red. Even at a two-way junction with equal timing, each light will be red half the time; at a similar three-way junction, the lights will be red two thirds of the time; and so on. Waiting is what traffic lights are for.

Fortunately, cyclists don't have to wait as much. Not because red lights can be ignored on a bike, whatever a minority of metropolitan cyclists think, but because on a bike you can filter. Even better, you can often avoid traffic lights entirely by taking backstreets and cycle tracks. Such a route can be quicker, not to mention quieter, even if it's less direct.

If you can't go around traffic lights, however, you'll have to go through…

What the signals mean isn't the same as how they're often interpreted.

When the lights are on red: Stop at the solid white line. If the light is just turning red, listen out for the accelerating engine of driver who has decided to chance it. Move to one side if necessary.

When the lights are on amber: Stop at the stop line. Go on only if you've already crossed the stop line or you're so close to it that you risk an accident by stopping. Glance back to check on traffic behind you.

When the lights are changing from amber to green: Don't proceed until green shows. You can put one or even both feet on the pedals and start rolling forward, so long as you don't cross the stop line before the light is green.

When the lights are on green: A green traffic light doesn’t mean it’s safe to go. It means 'go ahead if the way is clear'. Similarly for a green filter arrow. You're less likely to get stuck halfway across a junction on a bike, but it can happen. Avoid.

When approaching traffic lights on your bike, shift into a gear that you can accelerate away in. Cover the brakes. Glance behind. And always assume that you might have to stop.

If traffic conditions allow, adjust your speed so that you time your arrival at the lights to avoid stopping. Don't race recklessly for a green, but do back off the pace if you see a red, slowing more and more as you approach. It's easier to stop when you're going slowly, and the light may change, enabling you to carry on. It takes less time and effort to get back up to speed if your bike is moving, so you'll spend less time crossing the junction.

If there's no other traffic around, make sure that you ride over one of the flat rectangles in the tarmac on your approach. The sensor for the traffic light is under there. If you don't ride over it, the light may stay red. Note that some sensors aren't sensitive enough to pick up a single cyclist. The safest option then is to go around the junction as a pedestrian, pushing your bike. If you choose to cycle through a stuck red, do so with extreme caution.

Unless you're filtering (see below), use your approach to take up position in the centre of the leftmost lane that goes in the direction you're heading. Take the lane. This will make your presence obvious to drivers - and your intentions unambiguous.

Don't forget that you can give hand signals when stationary in, or at the head of a traffic queue, and not just while moving. That will leave the driver behind in no doubt of what you're doing.

Filtering past the traffic queue is perfectly legal. It's something that Advanced Stop Lines (ASLs) – those green boxes with a painted bike outline  – actively encourage. They're there because it's safer for everyone if cyclists get through the junction first, rather than being overtaken by drivers in the middle of the junction. When you get into an ASL, position yourself at the head of your lane.

ASLs often have a short cycle lane feeding into them. Treat these lanes with care, especially if they're narrow and next to the kerb. There's nothing to stop other traffic drifting into them, so do not use a kerbside cycle lane to pass a lorry or other long vehicle. If you fail to reach the ASL before the traffic starts to move, the lorry could drift or turn left and crush you.

Ordinarily, filtering is safest on the driver's side – the right. You might prefer to filter on the left if: you're turning left at the lights; there's no long vehicle in front; and either there's no ASL or you won't reach it. If you were filtering on the right in this situation, you might have to cut across moving traffic to turn left.

You can still filter even if there's no ASL. However, it is illegal to wait in front of the stop line. Stop behind the first vehicle in the queue, eyeball the driver behind you, and when the first driver starts to move, signal and move across to take the lane.

Conversely, you don't have to use an ASL. If there are only a few cars in front, it can be just as practical to stay where you are and take your lane instead.