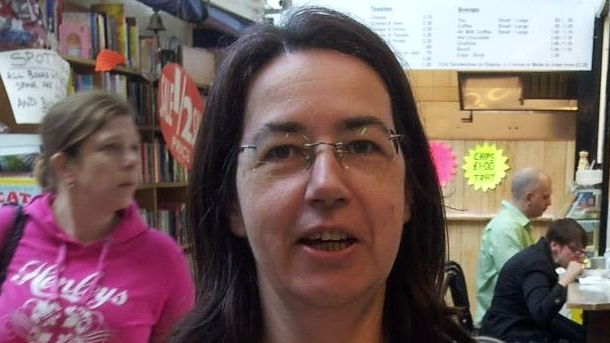 My bike is called the chimpcycle and I'm the monkey that rides him... in all weathers, all distances and all places.

We ride daily to work in rain, ice, snow, wind and sun ... we go out for coffee and a pint every Friday with our Lincoln Cycle Chimps & Breeze Network friends because cycling isn't just for work and transport, it's for leisure and pleasure too! 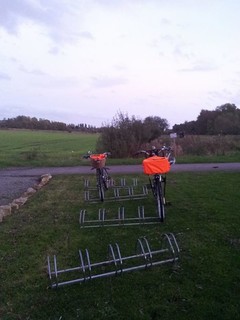 During the summer and even in winter we do longer rides too on sundays as part of the Go Sky Ride Local initiative, and we hang out learning about bikes from our Sustrans friends too. Cycling isn't just about transport or sport, cycling is about a whole life style of enjoyment and fun ... that's why Chimpcycle and me do all we can to share that and promote that with as many other folks as we can, because all of us or many of us should try it, do it and learn to love it too ;)

Cycling isn't just for work and transport, it's for leisure and pleasure too! It's a whole life style of enjoyment and fun ...that's why I do all I can to share that- Breeze, Sustrans, CTC Road Justice, Lincoln Cycle Chimps & More, out, about, home & work 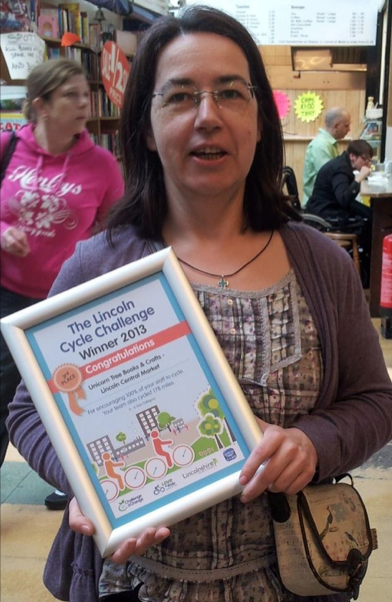 Wow – first off let me say hooking a hesitant cyclist is not easy work at all – most folks have a host of reasons why they don’t want to commute and these ranged from the ‘Painful Bottom’ issue making sitting at work uncomfortable (this was a surprisingly common objection!), fitness levels not being up to it (start slow build up, that’s how fitness increases and my weight got lost) to the roads being ‘dangerous at peak hours’ (not nearly as true as most think and the news portrays it) and finally ‘Kit & clothing Issues’ (these range from not liking lycra, waterproof issues though to stinky/sweaty at work issues) ... the truth is most of these things are easily overcome but convincing people of this takes a lot longer than the time I had or else would have involved expenditure in bribes!

However after many many days searching I finally lucked out with my friend & the supervisor of the Market in which my business is based, Andy Bradley. It took a while to convince him and I think he finally just got fed up with my hangdog expression, but hey! one hesitant cyclist hooked!

I knew Andy had a bike as he won one at a fund-raising event a few years ago, I also knew he had used it a few times for fund-raising charity events such as cycling between pubs on summers days (yes genuinely a fund-raising event as the pubs are between Lincoln & Boston so it’s a combination sponsored mileage event and then rattling the bucket in the pubs of course!).

1) How far away from work does he live?
About 2.5 miles (... but up a very Steep Hill on the way home, and along a really busy road – the A15 – without any real cycling infrastructure to offset this).

2) When was the last time he had cycled?
About 6 weeks before – short gentle ride on quiet roads with some friends.

3) Did he like the idea of cycling to work?
Definitive NO... see the above first answer and the fact it took a few days for me to convince him.

4) What puts him off cycling to work regularly?
The hill, the smog, the lack of cycle infrastructure, lorries & buses, weather ...

5) What achievable measures could encourage him to cycle to work more often?
The problem here came with the word ‘achievable’, Andy had loads of suggestions such as a ‘lift on lindum hill’, better cycling infrastructure so he didn’t have to actually be near the cars, lorries & buses, etc but on the whole these aren’t easily achievable in the near future. Things that might help could be an ‘electric bike’ to cope with the hill, finding alternative routes (though there is a lack of real options that don’t involve busy roads really) and obviously for the weather it’s all about kit.

Combating the danger theme ... first thing very apparent was a complete antipathy to helmets, having to wear a helmet would be a deal breaker and in all fairness the truth is that the jury is out on whether helmets help or hinder in keeping a cyclist safe from anything than a simple fall...
So level 3 bikeability training might perhaps help – though truthfully it isn’t that Andy hasn’t got the skills already it is just that he really really doesn’t like dealing with the traffic, and understandably so, the A15 is busy but quite narrow with a lot of hinderances along the way.

Combating the Smog/fumes ... Bandit Mask for the smog – ok would stop you breathing fumes but they are largely hot to wear and they make you look a little strange to say the least, so this too is out.

Combating THE HILL & Cycle Infrastructure issues ... At the end of this we realised there wasn’t much we could do to change some of his issues but we could look at the maps and see if we couldn’t find slightly less congested paths to use – and that’s what we did.
At the end of the day there were 3 (how perfect!) possible routes from work to Andy’s because the truth is the problem is the ride home for Andy not the ride to work – Andy actually comes into work at 6.30am so there’s very little traffic on any route then and it’s downhill... the problem is going home.

So the three routes we worked out were:

After trying the different routes in the end it was decided going up Lindum Hill and then following the quiet Lindum Terrace and Sewell Road tree lined quiet roads to Greetwell Road was the best one. However in the end walking with the bike as opposed to riding it up Lindum Hill... Hills are hard work at anytime but this one is heavily trafficked and narrows from a dual to a single and is very very steep so not a cyclist friendly road at all anyway, and with no dualled path or cycle path at all what else can you really do!!

Did Andy enjoy the experience?

Not really – but if there were more cycle paths and quiet roads he’d probably do it a bit more, though not in the rain again!!!

Oh and that rain? Just so you know, by the way, we blamed the rain on the fact that an Endura Luminite Waterproof BackPack Cover had just been sent out to me as a surprise as part of the cycle challenge... So Andy wasn’t entirely amused by that rain when he was doing the challenge for us ... therefore it seemed only right he should get something from the experience ... and yes the backpack cover does keep things dry he says!!

First thing is that in regards to sizing for the womens jacket I think it fair to say commuters who wear their normal clothes to cycle in would definitely need to go up at least a size, but sporty lycra riders would probably be fine.

I asked for the Black edition instead of the Day-glo (or Pink) You see I commute not only to work, but to the shops, to the pub, etc, and I don’t do Hi-Viz day-glo when walking around town or going into work, and given that I work in the centre of town and the place I park my bike is a walk through town via the coffee shop first, well let’s just say that Hi-Viz day-glo as casual city wear is not a good look and is not an essential look for commuting cyclists in my book.

With the Endura Luminite having more than adequate extremely well placed all round directional reflectives built into the jacket - let alone the red light in the rear that can be on at any time needed- there is little real need for it being hi-viz day-glo too. A Hi-Viz gillet is fine if extra glo-viz is needed yet is easily packed away, and thus means that the commuting cyclist can then still walk around town without being a walking eyesore, I’m guessing that’s why they produce the jacket in the black as well as the Hi-Viz pink and glo, an awareness of this fact. 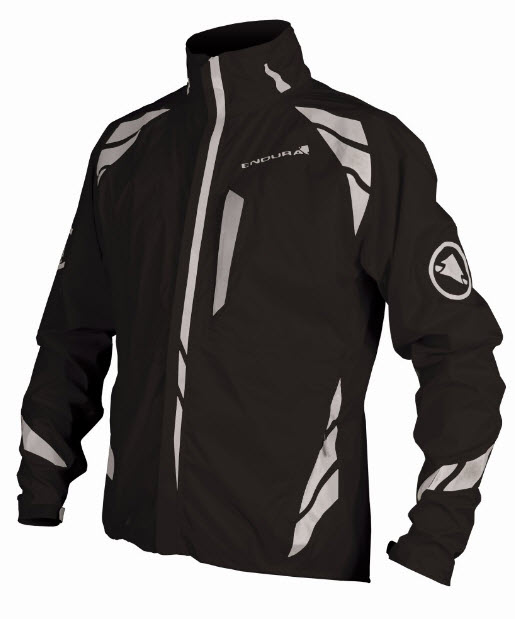 The black jacket really is a brilliant all purpose commuter friendly jacket – though the placing of the endura arrow right on the bum may perhaps have been a little better thought out for a womens jacket! especially as the jacket does have the glo-bug shaped light built into it too, ensuring you never leave home without a rear light.

It’s easily the lightest of the weatherproof commuter jackets I own, possibly due to having no lining, so I am a little concerned as to how that’s going to feel in the warmer days ahead next to t-shirt bared skin.

However that aside on the first day I got this jacket the weather proved admirably helpful in letting me give the jacket a full test...
Beautiful blue sky and sunshine for the morning ride, however with an initial bite to the air – so I can tell you that it is a great windproof jacket that helps retain your own warmth in chill air, however it is also breathable and once my own heat had built up and in the sun traps it didn’t get too sweltering hot thanks to the underarm zips and general construction – the zipper pull being easy to grab to both zip up and zip down as needed in changeable conditions.
On the late afternoon ride home our beautiful weather was in fact a dim memory as I cycled through dark grey rain and two hail storms with obligatory headwinds. The jacket held up wonderfully and the glo-bug light on the rear really proved it’s worth at a time when I shouldn’t have needed my rear lights on (though I do always have them with me) as all I had to do was reach behind me and poke my back to turn it on, rather than hop off the bike to do it. Add to this that the jacket didn’t let any rain in despite it being sudden lashing, driving rain – of course the hail found such a thin barrier no impediment to bruising stings - but on the plus side even though zipped up as much as I was and cycling as fast and determinedly as one can to get out of such weather I can honestly say I didn’t feel like I was melting in the jacket from my own precipitation which is always a good thing and a good demonstrator of breathability.
The only down I have is that the jacket didn’t stay snugged under my bum as it is meant to and despite it being elasticized and shaped to tuck under the bum it did instead ride up to gather at my waist, not a major issue really... again I wonder if that’s because I ride a sit up and beg style bike rather than being a racy roadbike type bent down low over the bars which would probably give a better form to hold the grip as it were!

On the whole it’s a nice jacket that does it’s job well though and I’ll look forward to road testing it more in the coming weeks and months.

I'm the person who has a grim little grin on wet days because I know I'll probably set myself a...

Rain, hail, sleet or snow, whatever the weather i'm on the bike.

I am a super commuter! I roll my steel horse to and from work every day come rain or shine,...