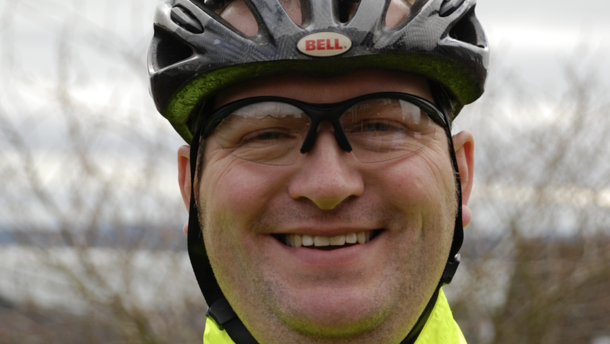 Rain, hail, sleet or snow, whatever the weather i'm on the bike. 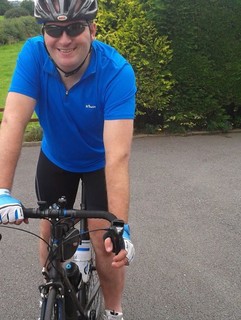 My commute is a 26 mile round trip and covers sea front, busy main roads, a lough shore park, a cycle path which runs along side a busy motorway, through an industrial area and then through Belfast City Centre. I have done this for nearly 4 years and have covered over 20,000 miles and still love it. My coldest commute was a snow covered -7 degrees. My most painful was coming off 3 times on black ice. I was recently able to get my work signed up to Cyclescheme and have started encouraging others at work to take cycling.

One of my pet hates are drivers who look, see me cycling and then pull out anyway! My favourite pieces of kit are a rechargeable air horn and a mega bright 1600 lumen front light which have both saved my bacon on a number of occaisons. Only since commuting on my bike have I grown to realise that cycling is definately an adrenalin sport.

We asked the Super Commuters to approach a hesitant cyclist in their workplace and talk to them, in a bid to understand any barriers that stand in the way of getting them in the saddle and riding to work. Here is how Norm got on!

Norman approached a collegue called Paula and asked her the following questions:

1) How far do you live from work?
I live about 9 miles from work which I am worried is a bit of a long round trip.

2) When was the last time you rode a bike?
About 3 months ago. It was a lovely day and we cycled to Bangor and back from Holywood.

3 ) Do you like the idea of cycling to work?
Yes but only on nice days.

4)Are there some things that put you off cycling to work with some regularity?
Rush hour traffic, bad weather and no changing facilities at work.

5) What achievable measures would encourage you to cycle to work more often?
A shower at work would be great. It would mean I could feel fresh after cycling in.

How Paula got on!

Paula did great. It had rained the night before so although the ground was wet it was a dry pleasant morning. Paula kept a good leisurely pace and I enjoyed the company. Paula and I work for a local Charity, BCM, and Paula decided to take advantage of this challenge and did it as a sponsored cycle. She is still getting her money and as I write this she has one more cycle to do which will take place this Friday, 30th May.

Paula was a bit nervous having to cycle home on her own as she works part time and finishes before me. She was brave though and took full advantage of the cycle / bus lane and worked her way through the city centre to the cycles only lanes.

She pulled a sly one the second day having told me she wouldn't cycle. She had found the hill up to her house quite tough on the first day so she put the bike in the car and parked where we met me the first day. Having reduced her cycle by 2 miles each way she went into work on the very flat cycle path. Paula had prepared herself for a sore bum having bought a cushioned seat that covers the existing seat, but it wasn't enough.

Two days down, only one to go. I will give an update on Friday and will give the running total on what Paula has raised so far.

I'm the person who has a grim little grin on wet days because I know I'll probably set myself a...

My bike is called the chimpcycle and I'm the monkey that rides him... in all weathers, all...

I am a super commuter! I roll my steel horse to and from work every day come rain or shine,...