How to ride on ice and snow 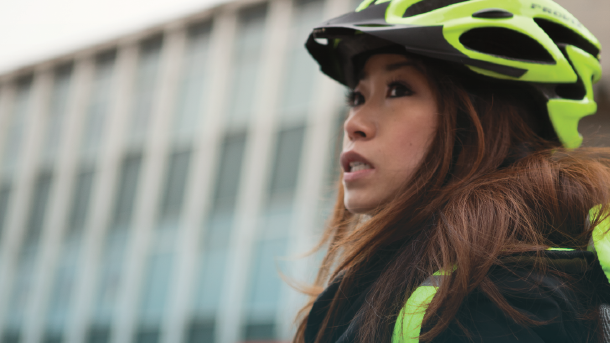 The thought of riding in ice and snow can be enough to make even hardened cyclists think twice before biking to work, but is it really that dangerous?

Winter weather in Britain is seldom bad enough to make cycling impossible. But when we do get snow and ice, it affects us disproportionately compared to countries that spend months in the freezer. We don't have the same infrastructure to keep the roads clear. And we're not used to cycling (or driving!) on snow and ice, so we're less likely to have the skills or equipment to make it easier.

Well-used roads are highly likely to be gritted, especially in urban areas, while backstreets and cyclepaths rarely are. Adapt your route to work to suit, depending on your bike choice. In the worst conditions, you may need to walk your bike to a gritted through-road before getting on it.

If you're worried about staying upright, leave your bike at home and travel by other means for a day or two. Falls on ice can put you in hospital. You go down hard and seldom have time to react. Even if you ordinarily don't wear a helmet, it's worth putting one on for icy days for just that reason.

Be alert for ice whenever the temperature dips near zero, not just below. Breath pluming? Take care! The TV weather forecast gives a headline figure but that doesn't take account of local altitude differences – higher is colder – or whether a particular bit or road is north facing or in shadow. If it's black ice, you won't even see it. Try to remember anywhere you've encountered ice before, as it tends to reoccur in the same places.

Compacted snow can also be slippery. Freshly fallen snow is different. Traction is okay with wider tyres, although it's hard going. The main problem is that you can't see what the snow hides. A pothole? A kerb? Don't feel pressured by motorists to squeeze into the slush or deeper snow towards the edge of the road; take your lane when necessary.

Allow more time for your commute so that you can cycle more slowly, reducing the risks and consequences if you do encounter ice. Cycle as smoothly and predictably as possible, with no sudden jerks, sharp turns or hasty decelerations.

If you find yourself on ice, aim to keep going in a straight line if you can. When the front wheel can't grip, you can't steer. Avoid using the front brake on ice. If the front wheel is turning, it has some traction – albeit not much. If the wheel locks, it will start to slide and you'll immediately lose control.

You can slow down by gently applying the rear brake. The rear wheel may break traction and start to slide, but it is possible to control a rear wheel skid. If the back end starts to slew around, put a foot down speedway-style.

It's quicker to get your feet off the pedals if they are ordinary flat ones rather than clip-in pedals. If there's snow on the ground, it's also easier to get your feet securely onto flat pedals. Snow compresses into ice around shoe cleats if you walk on it, making it awkward to engage the cleats with the pedals.

Riding in snow is easier with bigger wheels and fatter, lower-pressure tyres. The bigger 'tyre footprint' provides traction and enables the tyres to sit on top of the snow better, a bit like snow shoes. Prominent tread-lugs on the tyre help to keep your wheels turning. If you have a mountain bike, use that instead of your normal commuter. Reduce the pressure to the minimum figure printed on the tyre sidewalls and off you go.

Cyclo-cross bikes, touring bikes and fatter-tyred hybrids are pretty good in the snow too. They have moderately wide tyres that can be run at lower pressures, and they have bigger clearances between the tyres and the frame than road bikes, which collect compacted snow under the brake callipers and at the bottom bracket. (This is also a problem for any bike with close-fitting mudguards.) Small-wheeled bikes such as compact folders struggle to make progress in thicker snow.

It's harder work pedalling through snow. Use a lower gear so that you can pedal easily. If you have to stand up to pedal, you'll have less weight over the rear wheel so you're more likely to spin it. Aim to remain seated. Bike handling isn't as erratic as it is on ice, but bear in mind the riding-on-ice advice. You can still slip and it's possible to (literally) snow-plough the front wheel if you turn suddenly.

If the snow is falling, make sure you're visible to drivers.

For severe winters, it can be worth investing in studded tyres. Studded tyres are the only ones that will grip properly on ice. You might need them for only a few weeks, but they can then be stored until next winter. Studded tyres are available to fit mountain bikes, cyclo-cross bikes, touring bikes, and hybrids.

Some bike types work better than others on icy or snowy roads. Fixed-wheel bikes offer a means of slowing down – back-pressure on the pedals – that's less likely to make the wheel lock up and then slide on ice. Tricycles, whether upright or recumbent, work even better as they don't need to be balanced by steering; they'll stay upright by themselves. For regular rides on snow, there's a sub-class of mountain bike called a fat bike. It's a mountain bike but with enormous tyres – typically four inches wide - designed to be run at very low pressures. Probably best for the Canadians and Norwegians, however…