Round Up: Touring Bikes 2 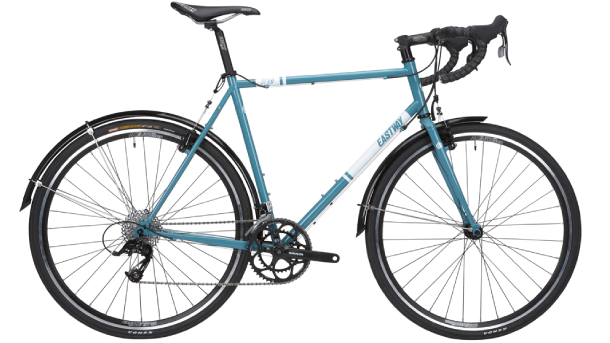 A touring bike is designed to carry luggage easily and its rider comfortably. It's an obvious choice for cycling trips, such as riding coast-to-coast across Britain.

A touring bike is designed to carry luggage easily and its rider comfortably. It's an obvious choice for cycling trips, such as riding coast-to-coast across Britain. It's also a good option for daily transport, because it's specifically designed to carry bags. For longer commutes, the tourer is more practical than a road bike and more efficient than most hybrids. As an all-rounder, only the cyclo-cross bike comes close.

Touring bikes are uncommon. Most are produced by British companies; the typical travel-and-transport machine on the Continent is the flat-bar trekking bike, while North American bikes tend to be less utilitarian. A smaller market means relatively higher prices, and it's difficult to find a tourer under £500. On the other hand, tourers usually come fitted with the mudguards and pannier rack that other bikes lack.

All touring bikes are sturdily built, so are seldom lightweight. The frame and fork have to be strong and stiff enough not to flex or shimmy when loads are applied, and they need to be tough enough that a careless knock won't write off your trip in the back of beyond. That's why you don't find carbon fibre touring bikes. Titanium ones exist – at a price. Touring bikes at Cycle to Work prices are usually steel, occasionally aluminium. Either is fine. The fork is always steel.

Tourers are designed to be equipped with full-length mudguards and a rear pannier rack – sometimes a front one too. There are threaded eyelets for racks and guards and, just as importantly, lots of room to fit them. A tourer's wheelbase is longer. Longer chainstays mean that you won't catch your heels on your panniers when pedalling, while a longer bottom-bracket-to-front-axle distance allows slow speed turns without the front mudguard hitting your toes.

Most touring bikes have 700C wheels, like road bikes, only with wider rims and more spokes. Wider rims are required because tourers use fatter tyres: anything from 28mm to 40mm or more. More spokes – 36 rather than 32 - adds strength. Fatter, heavier duty tyres run at medium pressures aren't quite as quick as road bike tyres, but they'll roll along better than cyclo-cross or mountain bike tyres on tarmac while still having enough tread for towpaths and tracks. The bigger air pocket means potholes and rough roads are less of a problem. Some tourers use 26-inch wheels, either for extra reliability on expeditions or for a better fit for shorter riders.

Gearing for touring bikes is a little complicated. Load lugging and easy pedalling over hill and dale means that MTB-style trekking gears are required. But a drop handlebar demands that shifters come from road bike ranges. Fortunately, there are some mix-and-match combinations that work: Shimano 8- and 9-speed road shifters will operate Shimano 8- and 9-speed mountain bike rear derailleurs respectively, while Sram 10-speed road shifters will work Sram 10-speed mountain bike derailleurs. Bar-end gear levers, not integrated with the brakes, are sometimes used instead.

The brakes will generally be cantilevers, which you also see on cyclo-cross bikes. They provide more clearance, so you can use a fatter tyres (plus mudguards) than you could with sidepulls. Cable-operated disc brakes are becoming more common on tourers, and for commuting these offer reduced wear and better wet weather braking.

The touring bike's drop handlebar is set higher and closer than a road bike's, so that you ride in a more relaxed, more upright position. The advantage of the drop bar isn't so much the drops themselves – which are nevertheless useful if you're in a hurry or it's windy – but the wide range of hand positions available, so your fingers don't get numb or tingly. Saddles, meanwhile, are often either leather or 'anatomic' (with holes, groves etc), to provide all-day comfort.

If you need one all-purpose bike, the tourer is like the estate car of the cycling world. Here's a selection of what's available. 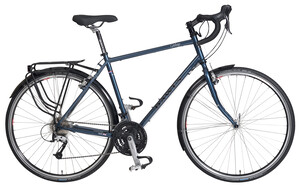 The Dawes Galaxy name is synonymous with touring bikes; it's been around for decades. The specification of the bike itself has obviously changed over that time. The current version has a chrome-moly steel frame and fork, with the fittings you'd expect. Gearing is a 27-speed mix of Shimano Sora (integrated shift levers, front derailleur) and Alivio (rear derailleur). Wheels are well-specified for an entry-level touring bike, with Shimano hubs, 36 spokes, eyeleted rims, and 700x32C Schwalbe Marathon tyres. Contact point comfort is pretty good too, thanks to a gel saddle and gel-padded cork bar tape. 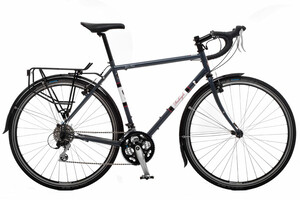 The Gran Tour is a new addition to Raleigh's touring bike range. It's similar to the Dawes Galaxy, having a classically style chrome-moly steel frame and fork, with mudguards, rear rack, and fittings for low-rider front rack. The gearing is 8-speed rather than 9, as it uses Shimano's entry-level 2300 integrated shifters rather than Sora, but the derailleurs are the same, as is the overall gear range. The wheels also have Shimano hubs and 700x32C Schwalbe Marathon tyres, but with 32 spokes each they're not quite as strong, so the spare spoke carrier mount on the frame makes sense on touring holiday. 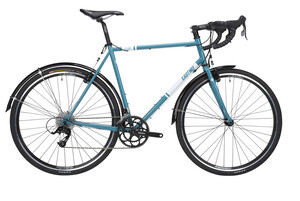 Eastway is a new bike brand from Fisher Outdoor, and it includes this touring bike. The frame is the same Reynolds 520 chrome-moly steel employed by Raleigh. There are mounts for a rear rack but only mudguards are supplied. Gearing is unusual for a touring bike: it's 10-speed Sram Apex throughout. This is a good quality drivetrain aimed at recreational road bike riders, so the 11-32 cassette is driven not by a triple chainset but a 50-34 compact double (giving 20 gears). For commuting that's fine, though the 32/34 bottom gear is rather high if you plan to be carrying heavy panniers.