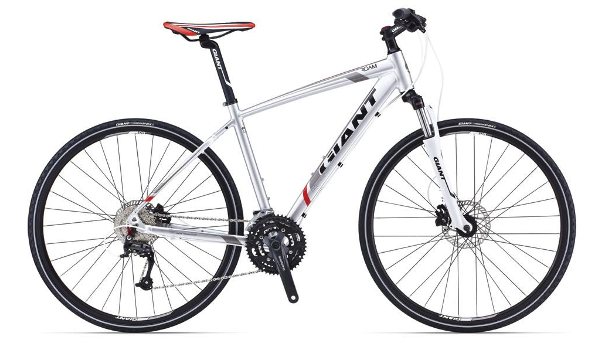 Buying a cheap bike – anything much less than £300, let's say – is often a false economy. It probably won't be comfortable, efficient, and reliable enough for regular use. Getting a bike for less than £500 has some real advantages, however, even if you'll save 32% or more by obtaining it through Cyclescheme.

Buying a cheap bike – anything much less than £300, let's say – is often a false economy. It probably won't be comfortable, efficient, and reliable enough for regular use. Getting a bike for less than £500 has some real advantages, however, even if you'll save 32% or more by obtaining it through Cyclescheme.

For one thing, the Government's 'acceptable disposal value' – the percentage of the original price that you pay at the end of the hire period – is lower for a bike that costs less than £500. It's 18% of the original value if you buy the bike after 12 months, compared with 25% for a bike costing £500 or more; and it's a mere 3%, compared with 7%, if you buy the bike after four years.

As the maximum bike-plus-equipment package value is £1,000 under the Cycle to Work scheme, a cheaper bike also leaves more money for everything from jackets and helmets to mudguards, racks, locks and lights. Even though the hybrid is the default commuter bike in the UK, most are sold as bare bikes, without key commuting accessories.

Exactly what you should expect when you're spending close to £500 on a hybrid will depend on what sort of hybrid it is: do-it-all hybrid, flat-bar road bike, trekking bike, etc. But here are some general guidelines.

The frame will be aluminium, which will save weight compared to steel. Most frames and forks will have eyelets to attach a pannier rack and mudguards. Some £500 hybrids will have a rigid fork, either steel or aluminium; others will have a budget, coil-spring suspension fork, which offers bump absorption at the cost of some extra weight. Suspension lockout improves efficiency on road, preload adjustment enables you to compress the spring so it doesn't sag too much under your weight, and rebound damping will stop the fork pogoing.

Between £400 and £500, you can expect 3x8-speed derailleur gearing such as Shimano Alivio, Altus or Acera. This is better quality than 7-speed, although it doesn't actually matter how many gears there are as long as they go low enough for you. Most hybrids have a good gear range, thanks to a 26-36-48 triple chainset and an 11-32 cassette – or something similar. Some flat-bar road bikes have a double chainset and a smaller cassette, which means higher gears.

Braking might be on the rim, via side-pull or direct-pull brakes, or at the hub, usually with mechanical disc brakes. Discs don't slowly wear the rim away, so are good option for a long-term commuter, but there's little difference in stopping power – unless they're hydraulic, which are in a different league.

Wheels will be 700C, the rim diameter of road bikes and 29er mountain bikes. Tyres might be anything from 25mm to 40mm or more. Thinner tyres take higher pressures so are faster on smooth roads, but fatter tyres are more comfortable – especially on bad roads. Look for 36 spokes per wheel rather than 32 if you're a heavier cyclist or will carry heavy loads.

Here are some good examples of hybrids under £500. 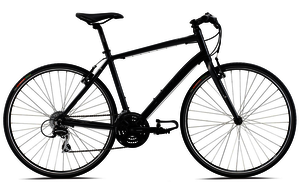 As it sits in Marin's 'speed commuter' range, you might expect the Fairfax SC2 to be a typical flat-bar road bike. But there's more room under the brakes for mudguards and bigger tyres (32mm ones are fitted) because it uses direct-pull brakes rather than road-style side-pulls. Its 36-spoke wheels are better suited to the rigours of commuting too. You can fit pannier racks front and rear. And the 8-speed gearing pairs a 26-38-48 chainset with an 11-32 cassette, so you don't have to be an athlete to ride up steep hills. Yet it's still a sporty bike, with a lightweight aluminium frame and fork. 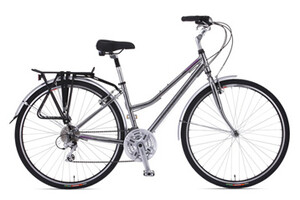 The Sonoran is a trekking bike, so it already has the mudguards and rear rack that make commuting more practical. Some trekking bikes also come with a budget suspension fork, which they don't greatly need. The Sonoran doesn't, so it lacks the ponderous on-road wallow of some of its rivals. The riding position is relaxed and upright, with a tall, adjustable-angle stem and a backswept handlebar. A suspension seatpost and chunky 35mm tyres take the sting from less-than-perfect roads, while the 36-spoke wheels are sturdy. Gears are 24-speed with a good range. For more sedate cycling, it's a sound option. There's also a gent's version. 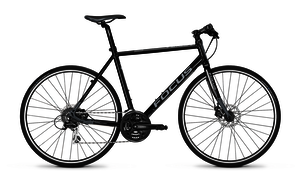 The German-made Arriba 4.0 also exists in a rim-braked version at the same price. The disc version has the same number of gears (24) over a wider range, making it the more versatile option and the better for lugging panniers. Unlike some bikes with disc brakes, a rear rack will fit without complications as the calliper is mounted out of the way on the chainstay instead of the seatstay. Like the Fairfax SC2, it's a relatively lightweight, all-aluminium bike that suits on-road fitness riding as well as commuting. The 30mm Schwalbe Spicer tyres are for tarmac and firm tracks only, and they have some puncture protection. 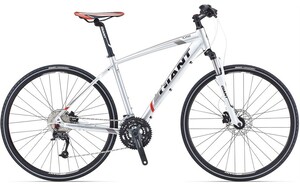 The Roam 2 looks more like a mountain bike than a town bike: it's a dual-purpose hybrid, intended for rough tracks as well as roads. Look closer and you'll see those tyres are 'only' 40mm (wider ones will fit) and they're slicks. There are eyelets for mudguards on the suspension fork as well as the frame. The 63mm-travel SR Suntour fork is unsophisticated but does at least have a lockout lever. It's the Roam 2's brakes that really stand out at this price: they're Tektro hydraulic discs. The gearing is 9-speed rather than 8, with a useful bottom gear of 26/34.

Round Up: Reasons why you should be cycling to work

If you aren't already enjoying the benefits of cycling to work, or need a little convincing,...

Round Up: What lights do I need for my commute?

The best choice of lights for seeing and being seen while cycling at night will depend on the...

Round up: Bikes for those with mobility issues

A large range of bikes for disabled people means few should have to give up the idea of a two-...