How to ride on multi-lane roads 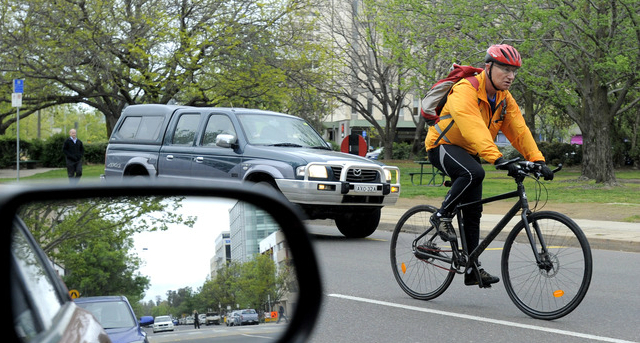 As a cyclist, extra lanes can be daunting, whether they're at junctions, on busy urban streets, or dual carriageways. Here's how to take control.

When roads are wide enough to divide into two or more traffic streams, road position and communication are key. There's a certain amount of jostling for position among other road users, especially among those not familiar with the road. You can have traffic on your inside, possibly moving faster than you. And you sometimes have to change lanes yourself. It's easy to be intimidated, but once you're clear about what you're doing, you can cycle smoothly and confidently through the apparent chaos of multi-lane roads.

Which Lane to Cycle In?

'In the lane' will often mean 'in the middle of that lane'. You take the lane. That way you won't be trapped between streams of traffic. You'll be able to control your trajectory through the junction, and you'll be more visible to drivers. You'll dissuade them from overtaking when there isn't room for them to do so safely. On a multi-lane road there's another lane for drivers to move into to overtake you, so it's not like you'll be holding them up.

On busy roads with traffic that's moving much faster than you, a position further to the left – perhaps a metre from the left-hand edge – is generally safer for cyclists than taking the centre of the lane. This is especially true when the lane is so wide you can be safely overtaken within it, or when the road as a whole is wide enough for two traffic streams to pass you – for example, a typical dual carriageway. 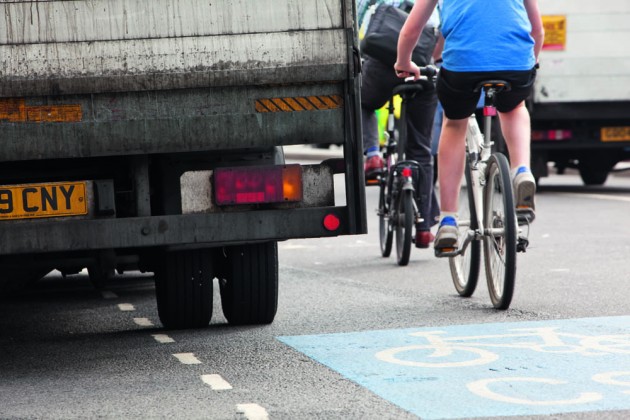 What Should Cyclists Do When There Are No Lane Markings?

Some roads are wide enough for side-by-side traffic but are not demarcated by white lines. This is very common at T-junctions, where a single lane widens enough to permit left and right-turning traffic. If it's clear where the de facto lanes are, treat them like marked lanes: get into the leftmost lane that goes where you want to go and, unless there are good reasons not to, take that lane.

Sometimes it's unclear. You get a stretch of one-way road that is wide enough for two streams of traffic but the lines of vehicles overlap, merge and diverge as drivers decide where they want to go. In this situation, the centre of the road is the most confused area, and the most dangerous for cyclists. Avoid it!

Instead, ride a good distance - a metre or more - out from the side of the road. That way you won't be hemmed in but traffic will be able to pass you easily. Usually you'll be on the left-hand side, but you may have to move across to the right-hand side to get where you want to go. Traffic will then pass on your inside, but this is better than traffic passing on both sides, or you being trapped on the wrong side of the road.

How Should Cyclists Change Lanes On Multi-Lane Roads?

If there's no traffic there's no problem: just go to whichever lane you want to be in. Otherwise, break it down so that you're changing one lane at a time. Look back, signal, eyeball the driver behind to check you can move out, and move towards the right of the lane you're in. Then hold your position. When there's a gap or a courteous driver gives you a gap, move over into the next lane. Repeat as necessary and be sure to acknowledge courteous drivers when it is safe and appropriate to do so.

If the road is diverging into two and you want to get into the right-hand lane from the left-hand lane, give yourself enough time to get into position. Don't hug the white lines. Even if the traffic is moving too fast for you to take the lane, it's important that you are clearly visible and that traffic doesn't cut you up. If you can't get across in time, don't take chances: pull over to the left of the left-hand road, stop, wait for a gap in traffic, and walk across to the road you want to be on.

Converging roads, where you have a road coming in from the left, are complicated by the fact that the traffic in the incoming lane may be moving faster than you. When navigating converging roads on a bike look back and left, signal left, eyeball approaching drivers, and move over into the left-hand lane when there's a gap. If you can't move over as the roads converge, aim to stop and wait within the safety of the 'spearpoint' of solid white lines that traffic will not merge through. Don't continue riding or you'll have fast moving, possibly lane-changing traffic on both sides. 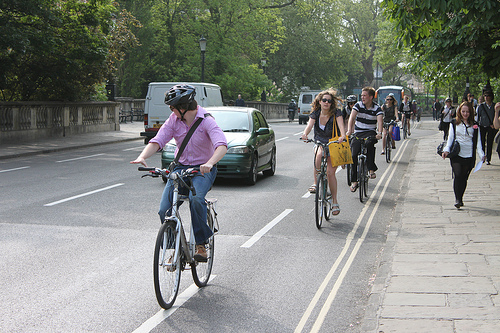 Riding Dual Carriageways On a Bike

That said, if there’s a way for you to avoid cycling on a dual carriageway altogether, take it.